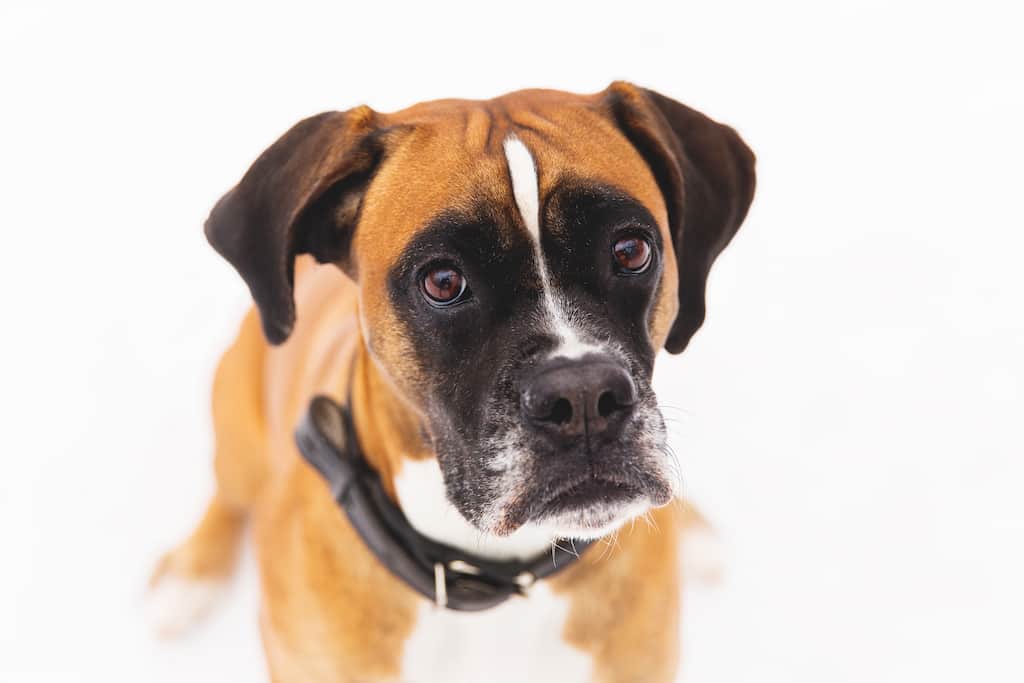 Intestinal parasites will rarely trouble a Boxer as long as you have all other aspects of your feeding and care right.

While it used to be the practice to worm dogs every month regardless of their worm status, latest research suggests not all intestinal worms are detrimental to your Boxer’s health or require eradication.

Much to the surprise of many owners, exposure to worms in the form of a small worm burden has been shown to help regulate the immune system, protecting against allergies and chronic inflammatory diseases.

It’s not necessary, or recommended, to automatically worm your Boxer and you should only do so if you observe symptoms and after conducting a poop test to confirm worms are an issue.

Store-bought chemical wormers should be approached with caution and their use minimized to avoid loading the body up with toxins, which can be more damaging than the worms.

The single most powerful thing you can do to protect your Boxer from an overburden of intestinal parasites is feed a fresh, natural canine diet.

I am not a vet. This article is intended for general educational and informational purposes. I encourage readers to view my full disclaimer here.

How Does A Boxer Dog Catch Worms?

The first step towards protecting your Boxer from intestinal worms is understanding how they are contracted.

The four most common intestinal worms, or helminths, found in dogs are:

Note that heartworm, transmitted by mosquito bites, is the most dangerous worm affecting dogs, but it is not an intestinal worm and so, not included in this discussion.

Most intestinal worms are caught by:

Depending on lifestyle and behavior, the average pet dog may well have very little exposure to catching worms.

You can make a judgment about your Boxer’s risk by considering:

However, just because a dog is exposed to worms, doesn’t mean he develops a worm infestation.

Why Intestinal Worms May Not Be Bad For Your Boxer

Wolves and other wild dogs are thought to carry a certain “worm burden” without it causing them any problems.

There is even evidence parasites can be beneficial to the host organism.

Artificially sanitizing the internal terrain by completely ridding it of worms, in a kind of “scorched earth” approach to parasite management, may be counterproductive.

More than 15 years ago, human doctors were linking a lack of exposure to intestinal worms with a rise in immunological diseases like hay fever, asthma, diabetes and multiple sclerosis in western countries, while these conditions remained relatively uncommon in the developing world.

Recent studies have demonstrated that having a small parasite load reduces the symptoms of allergies and chronic inflammatory diseases.

So, there’s a good chance having a few worms will do your Boxer no harm.

In fact, they will probably make him healthier.

Why You Shouldn’t Automatically Worm Your Boxer

There are several reasons not to give your Boxer chemical worming tablets or chews every month.

Aside from the fact that a small worm burden is probably health-promoting, dewormers do not stop your Boxer contracting parasites.

They only poison what’s there at the time the drug is administered.

In other words, wormers are a treatment for worms, not a prevention.

Which means: if you automatically worm every month, but your Boxer doesn’t actually have worms, you are medicating him for a problem he doesn’t have.

Worming a worm-free dog is all risk and no gain.

How Do I Know If My Boxer Has Worms?

Owners often leap to the conclusion their dog might have worms and administer a chemical wormer “just in case”.

The only way to know if your Boxer has worms is to collect a stool sample and have it tested, which is easy enough to do.

If your Boxer’s poop tests positive for worms, you can worm him at that point without having needlessly dosed him all along.

A fecal test may be in order if you notice signs of worms in your Boxer.

Intestinal worms, when present in small numbers, may cause no noticeable symptoms at all.

If your Boxer has a problematic intestinal worm infestation, you may observe:

Skinniness and scooting, where the dog drags his rear end along the ground, are two things that often send owners reaching for the all-wormer.

Boxers are a lean, muscular breed.

Many owners make the mistake of thinking their Boxer is too thin when he’s actually just right.

Boxer puppies typically go through a skinny phase as part of normal Boxer growth and development, and don’t tend to fill out until they reach the age of three or older.

Here is how to tell if your Boxer is the right weight.

Scooting can be a misunderstood symptom.

Causes include worms but it can also be due to:

Your Boxer doesn’t have to look overweight to be consuming too much fat.

Other signs of fat overconsumption, or overfeeding, include:

Hopefully you are working with a natural rearing Boxer breeder who knows that litters don’t need to be automatically wormed.

If not, you can still talk to your breeder and request that your pup not be given chemical wormers.

If a Boxer puppy has roundworm, you may see a telltale pot belly.

A wormy puppy might suffer from poor growth and will often show other signs of being unwell, as a result of shortcomings in care and breeding.

Note: Coccidiosis is an intestinal infection that can affect puppies, but it’s not caused by a worm.

It’s caused by a single-celled parasite called a protozoan.

Which Wormer Is Best For Boxers?

If your Boxer has returned a positive fecal test for worms, and the worms are causing him to be unwell, you may feel compelled to administer a worming treatment.

Note that the American Boxer Club warns to “avoid store-bought preparations which can be dangerous”.

The most important thing is to avoid giving your dog all-in-one wormers.

These products are marketed as convenient ways to target fleas, ticks, intestinal worms and sometimes heartworm in a single medication.

But they are the riskiest of all ways to approach your dog’s parasite control, combining multiple drugs and doubling or tripling the toxic load in one pill.

Any worming treatment should always be targeted at the specific parasite that’s been identified as causing a problem for your dog.

How Often Should You Worm A Boxer Dog?

You should not have your Boxer on a “worming schedule” as such.

You should only chemically worm your Boxer if he has symptoms of a worm overburden and then only after confirming via a fecal test that he actually has worms.

Otherwise, you are needlessly medicating your dog.

Drugs always come with the potential for side effects and increase the toxic load on the body.

Toxic accumulation is a known contributor to ageing and disease, so you want to avoid unnecessary exposures.

It’s not a good idea to automatically vaccinate a dog without first titer testing to establish he is not already immune.

Likewise, flea treatments can be toxic for your Boxer and should be approached with caution.

You can safely protect your Boxer from fleas without the use of flea collars, spot-on products or flea pills.

Intelligent parasite control will protect your Boxer from parasites, but also from the dangers that can be associated with their chemical treatments.

Natural Treatment For Worms In Boxers

There are non-toxic, food-based ways to support your Boxer’s system to eradicate worms more gently, such as:

Pumpkin seeds have antiparasitic effects due to the presence of the amino acid cucurbitacin.

Fresh, raw garlic is a popular parasite preventive in raw feeding circles, said to be effective against roundworms and hookworms due to the amino acid allicin.

Many dogs will expel worms on their own when switched from kibble to a fresh, raw diet.

Optimizing the diet may be the only action you need to take.

How To Prevent Worms In Boxer Dogs

Diet is your most powerful weapon against intestinal worms.

Parasites typically overrun weak individuals but live in symbiosis with strong ones.

An optimally healthy dog is less vulnerable to an overgrowth of intestinal worms and more able to naturally keep populations in check.

The largest ever study of raw feeding, known as “Pottenger’s cats”, provides powerful evidence of this phenomenon.

Dr Pottenger observed nine generations of cats and discovered that those fed cooked food deteriorated in every measurable way — including in relation to intestinal worms.

He found that gastrointestinal parasitism became a major problem for cats that ate cooked food.

In contrast, cats fared fine with respect to intestinal worms when fed their natural diet of raw meat, bones and organs.

Interestingly, Dr Pottenger also discovered that soil he fertilized with the feces of cats on cooked food did not grow beans or grass.

Soil fertilized with the manure of raw-fed cats, meanwhile, grew both plants vigorously.

The goal of parasite control is to protect your Boxer.

It’s important to avoid not just the dangers posed by intestinal worm infestations, but the dangers that can be associated with chemical wormers.

Dogs in nature live happily with a small worm burden and research suggests parasites can actually be beneficial to their host’s immune function, helping to avert allergies and inflammatory disorders.

If you ever must use a chemical wormer, make sure it’s only given after a positive fecal test and that the drug targets only the particular worm that’s causing the problem.

Becker, Karen, One of the Least Savory Aspects of Pet Ownership That You May Not Know About, Mercola Healthy Pets, 2016

Cruz, Alvaro A et al, Global issues in allergy and immunology infections and allergy, Journal of Allergy and Clinical Immunology, 2017