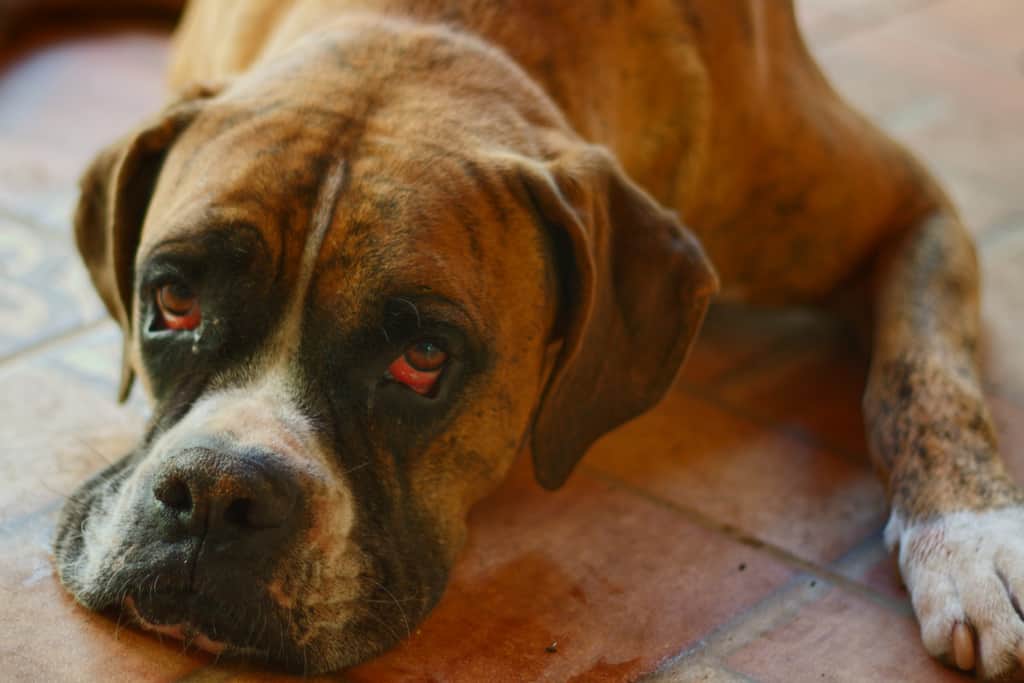 Yeast “infections” are one of the most common conditions affecting Boxer dogs, yet they are also commonly misunderstood and mistreated.

Yeast lives naturally on the skin of dogs but when it overgrows, it’s a sign your Boxer’s body is out of balance.

This imbalance usually arises in kibble-fed dogs or in dogs ingesting chemical wormers, flea and tick treatments or medicated with other drugs.

Curing yeast in Boxers, and the itch it can generate, is not a matter of killing the microbe with antifungals.

Rather, it’s important to address the problem at its origin, by removing the yeast’s food source — which is an excess of metabolic waste or toxins excreted via the skin when the body is in a state of toxic overload.

I am not a vet. This post is for general informational and educational purposes only. I encourage readers to see my full disclaimer here. Boxer Dog Diaries is reader supported. I may receive a small commission, at no extra cost to you, if you buy via links I share.

Yeast is a single celled fungus.

A healthy dog’s body hosts a variety of yeasts, some of the most common species being Malassezia pachydermatits and several types of Candida.

Yeast lives naturally on your Boxer’s skin (and your own), in balance with other microbes including bacteria.

Together, these microbial colonies — which populate the gut, reproductive tract and oral cavity as well as the skin — are known as microbiota.

In fact, the number of microbial cells in the body hugely outnumbers your dog’s own cells. (It’s the same in humans.)

Normally yeast causes no issues and actually provides nutrients that nourish the skin.

However, when yeast overgrows, it can produce redness, itching and discomfort.

Signs Of Yeast “Infection” In Boxers

The term “infection” is put in inverted commas because it’s not quite accurate.

“Infection” implies the invasion of a pathogen from outside, creating disease.

What actually occurs with yeast is an explosion in the population of a naturally-occurring, already present microorganism, in response to an underlying issue.

In other words, the yeast is a symptom of a deeper problem, not the problem itself.

This is why antifungal medication typically only resolves the situation temporarily — the yeast returns when the drugs are stopped, because the original cause remains.

Yeast overgrowth can affect your Boxer’s:

Often more than one site is affected, sometimes the entire body.

Yeast overgrowth can cause your Boxer to:

Sometimes these symptoms — particularly tear staining, doggy odor and discolored nails — are so long-standing that owners have come to accept them as normal for their dog.

(Note: Ringworm, characterized by a red, circular flat sore that can be contagious, is not actually a worm but a fungus.

Ordinary yeast “infections”, though, are not transmitted by contact with affected tissue.)

Yeast is an opportunistic organism that takes advantage of an imbalance in the bodily environment.

As such, yeast overgrowth should be taken as a sign that the body isn’t optimally healthy.

Triggers for yeast overgrowth include:

Antibiotics kill beneficial bacteria as well as the targeted species.

This is how they disrupt the balance of the microbiome in the gut, a well-known phenomenon called dysbiosis that frequently follows a course of antibiotics.

The same thing can happen on the skin.

Drugs like steroids suppress the normal functioning of the immune system, opening the door to a host of problems, of which yeast overgrowth is just the beginning.

Misfeeding is a frequent, and frequently overlooked, cause of yeast overgrowth.

Kibble and other highly processed dog food contains a raft of ingredients that add to the toxic load on your Boxer’s body.

When that load becomes too much for the primary eliminative channels (kidneys and bowels) to process (via pee and poop), the body enlists the skin as an “emergency-release” valve, to rapidly expel the excess.

This role of the skin in detoxification is why it’s dubbed “the third kidney”.

It’s why the skin tends to be the first place toxicity shows itself.

Even a fresh, natural canine diet can produce yeast overgrowth if it’s overfed, or if the fat content is too high which can be the case in pre-made grinds or if the fat is not trimmed from factory-farmed meats.

Dogs evolved eating lean game meats and there is no biological precedent for the amount of fat on livestock like beef, lamb and chicken which are deliberately fattened for slaughter.

Excess food or fat creates excess waste, which puts a burden on the body to clear and becomes an overabundance of food for the microbiome, supporting overgrowth.

The moist, warm spaces in your Boxer’s facial folds provide the perfect habitat for yeast and if yeast is going to overgrow, these locations are often where it first happens.

Likewise, your Boxer sweats through his feet and between the paw pads can provide a humid microclimate for yeast.

Yeast proliferation may be more likely in hot and sticky weather, but not when the other conditions in the body won’t support its growth.

No organism can increase its population without food to sustain it.

Stress is known to affect the body’s normal functioning in myriad ways and has been associated with yeast outbreaks.

Changes In Acidity Or Nutrition

The skin’s secretions change depending upon dietary inputs and when the diet is suboptimal, it has flow-on effects for the conditions on the skin.

Yeast problems have been noted to occur in association with obesity and diabetes.

In a sense, all cases of yeast overgrowth are a result of toxic accumulation.

Your dog’s body is constantly bombarded by toxins in daily life, including:

The liver, via its detoxification pathways, must rid the body of each and every one of these toxins, which accumulate over a lifetime via a stacking effect.

Toxic exposure is a known driver of ageing and disease in all living things.

When these various exposures exceed the body’s capacity to clear them, an outbreak of symptoms including yeast overgrowth is often the result.

In a sense, the yeast are nature’s microscopic clean-up crew, feeding on the accumulation of wastes and toxins.

How To Fix Yeast In Boxers

The solution to yeast overgrowth is simple: proper nutrition and minimizing the toxic inputs from chemical wormers and other pharmaceuticals so that incidental environmental exposures to toxins can be rapidly processed without tipping the body over the edge.

Boxers do best on a fresh, natural canine diet composed of lean muscle meat, edible bone and a little offal.

Use non-toxic means of parasite control and do your best to avoid exposing your dog to herbicides in the environment and chemicals in the home.

A good diet and clean, non-toxic environment supports your dog’s body, as a self-regulating system, to maintain optimum health including natural flora levels.

How Not To Treat Yeast In Your Boxer Dog

Popular, but misdirected, responses to yeast overgrowth in dogs include:

When the symptoms of yeast overgrowth are misdiagnosed as basic “infections”, antibiotics are the usual prescription.

Since antibiotics do nothing to kill fungus but wipe out the bacteria that live in balance with the yeast, these drugs typically result in the fungal overgrowth getting much worse.

Women will be familiar with this effect in their own bodies, thrush often arising after taking a course of antibiotics.

Killing the yeast that’s making your Boxer itch might seem like a great idea, but it won’t provide a lasting solution.

When the drugs are withdrawn, the yeast will return unless the underlying conditions of the body have been improved through addressing diet etc.

Being a drug, the antifungals will also have added to the toxic load on the body.

These are antifungals designed to kill the yeast.

Like pharmaceuticals, they do nothing to resolve the underlying cause of the overgrowth.

As above, with the added detriment of overwashing.

Washing your Boxer more than four times a year is not recommended as it strips the skin of natural oils, predisposing it to microfissures, tiny cracks which disrupt the skin’s barrier function and create itch.

Instead of using soaps, rinse your Boxer off in-between baths using just water.

There’s no shortage of companies claiming to have the antidote to a yeasty dog.

Supplements may appear to work when given in combination with an improved diet but are best avoided — especially those made with synthetic ingredients.

Invest instead in a properly formulated fresh, biologically-appropriate canine diet that provides a full complement of nutrients, in natural, whole food form.

Consumed in food, complexed with other vitamins and minerals, nutrients are much more bioavailable than when ingested as isolated chemistry.

Get the basics right, and your dog’s body — with time — will come back into equilibrium.

It’s often suggested that sugar should be removed from the diet of a yeasty dog, because “sugar feeds yeast”.

Sometimes a beneficial effect is achieved by cutting out carbohydrates like grains (which break down into sugar) but this is less to do with eliminating sugar and more a by-product of having optimized the overall diet.

Dogs, for instance, have no biological requirement for grains and are better served by animal protein.

It is perfectly fine for your dog to consume sugar in the form of fruit, which is a natural secondary food for dogs and part of a healthy canine diet.

In fact, fruit has a superhydrating and cleansing effect on the body which assists with flushing toxins.

You can happily feed your Boxer fruit such as:

Yeast Die-Off: It Gets Worse Before It Gets Better

First recognized in the 1400s in patients undergoing treatment for syphilis, the “Herxheimer reaction” is an immune system response to the recovery and detoxification process known as the “immune cascade”.

It’s since been observed during treatment of other infections involving spiral bacteria, such as Lyme disease.

Though science is yet to produce strong data supporting this phenomenon, anecdotal evidence suggests candida “die off” produces a similar effect in which symptoms temporarily get worse before they get better, permanently.

If owners aren’t aware that this is part of the healing process, there is a risk they will abandon dietary and other improvements in the mistaken belief that things have gone downhill.

When yeast die, they release a flood of toxins into the body, creating not only itch but toxicity at a system-wide level.

These “endotoxins” (toxins present inside microbes that are released when they disintegrate) include uric acid, ethanol and the neurotoxin acetaldehyde, which can adversely affect tissues throughout the body.

Recognized symptoms of candida die-off experienced in humans include:

Skin disease is the number one cause of euthanasia in dogs, yet so much of it is preventable and fixable.

Conventional veterinary approaches to yeast can send owners on a wild goose chase that overlooks the very simple solution.

Yeast overgrowth usually arises due to improper diet and exposure to toxins, whether ingested in food, administered as drugs or inhaled in the environment.

Got a yeasty Boxer? Feed a fresh, natural canine diet and minimize exposure to chemicals and watch your dog transform.

Remember a detox effect can mean symptoms often appear to worsen before clearing.

You can learn more about how to optimize your Boxer’s feeding and overall care in Supercanine: How to Raise a Healthier Dog or Revitalize a Sick One

Becker, Karen, DVM, Is Your Dog Chronically Itchy Or Smelly? Could Be This… Mercola Healthy Pets, June 2015

Caporuscio, Jessica, What to know about yeast infections on the face, Medical News Today, January 2020

Lee, Julie Anne, Skin Disease in dogs: What to do When Yeast Attacks, Adored Beast, April 2021