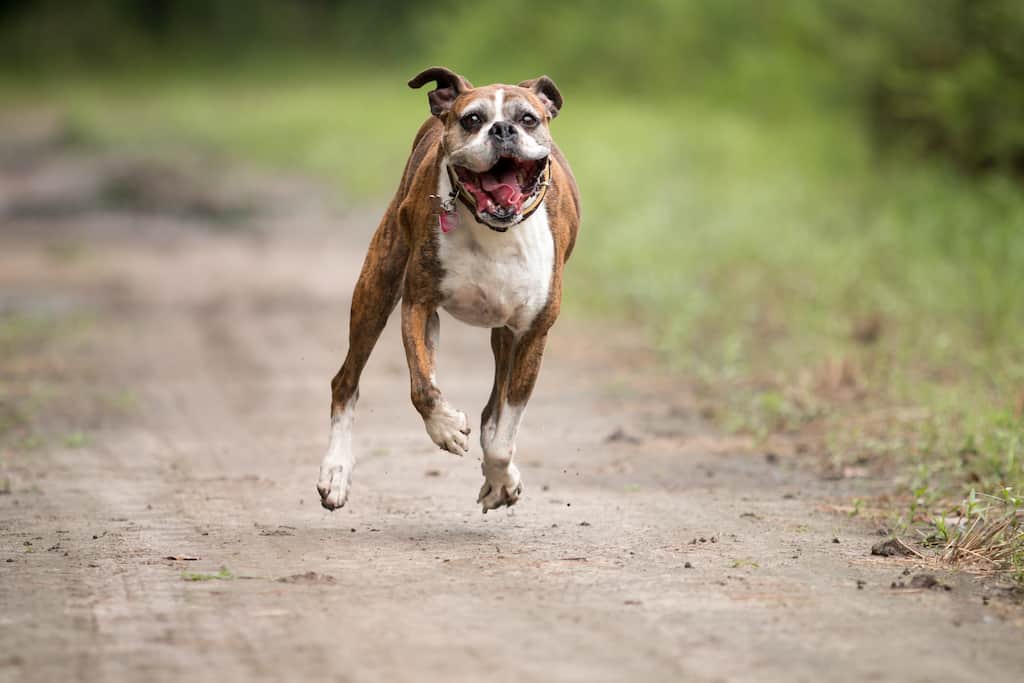 The zoomies are something that need no definition if you have a Boxer in your life.

Every Boxer owner is familiar with the sudden rush of energy and pure joie de vivre that prompts the mad dashing about known as “the zoomies”.

These spontaneous outbursts actually have a formal name: they are a kind of Frenetic Random Activity Period (FRAP).

As far as classic Boxer behaviors go, the zoomies are up there with “kidney beaning” (the wag of the tail that becomes a wiggle of the whole body), the quizzical Boxer head tilt, resting the chin on anything the right height, and sleeping on the back with the legs in the air.

Do other breeds have these moves?

Do they execute them with the aplomb of a Boxer?

I am not a vet. This post is intended for general informational and educational purposes only. I encourage readers to view my full disclaimer. Boxer Dog Diaries is reader powered. I may receive a small commission, at no extra cost to you, if you make a purchase via links I share. Thank you for your support.

What Are The Zoomies?

The zoomies are one of the most distinguishing behaviors in the Boxer dog repertoire.

Which is saying something, because Boxers have a lot of funny moves.

Performed at speed, usually in circles or zig zags, with lots of sudden changes of direction, they involve running around with total abandon, seemingly out of control and for the sheer fun of it.

The stance is important too.

The rump will be tucked and the back curved in a comic posture.

As a variation, a Boxer may spin in circles to the point of dizziness.

The wild motion will be interspersed with abrupt stops where the Boxer skids to a halt.

You may see your Boxer crouch flat to the ground, front legs splayed, before whirling around and taking off again.

The zoomies don’t involve chasing an object or another dog.

Bouncing atoms and pinballs come to mind. Bats out of hell.

What Causes The Zoomies?

Frenetic Random Activity Periods are caused by an accumulation of pent-up energy, released all at once.

The excess energy can be either:

Common times for the zoomies to strike a Boxer include:

The zoomies are normally short lived, serving the purpose of stress relief — your Boxer is blowing off steam, in the most entertaining way!

Of course, there’s always a fair chance a Boxer may also be playing for laughs.

Short occasional bursts of energy are 100 per cent normal.

It’s probably just time for a walk or a play outside.

However, if the zoomies occur overly often, they can be a sign your dog is not getting enough opportunities to release his energy before it builds up so much it blows.

Zoomies are not a problematic reaction like, say, destructive chewing, but can be on the same continuum of behaviors that arise when a Boxer is understimulated, bored or spending too much time in confined spaces like a crate or small apartment.

How To Stop Your Boxer Chewing Everything

Take it as a sign your Boxer could use some more constructive outlets for his energy.

You may want to provide more:

How Much Exercise Does A Boxer Dog Need?
Top 10 Best Toys For Boxers
5 Tricks To Teach Your Boxer
How To Feed Bones To Your Boxer
Are Boxers Cuddly? Meet Your 70-Pound Lap Dog

Zoomies are distinct from other repetitive behaviors, which can indicate more serious psychological disturbance, such as:

These behaviors ought to be interrupted, attention redirected and the cause addressed to prevent recurrence.

13 Reasons Why Your Boxer Is Hyper

How To Cope With The Zoomies In A Boxer Puppy

Knowing zoomies are a guaranteed part of life with a Boxer allows you to factor them in to how you manage your pup.

The main issue created by zoomies is the need for space to safely run around without your Boxer injuring himself.

If you have a backyard, zoomies will generally take the form of laps around the perimeter.

If you live in a studio apartment, you Boxer will make do with what’s available.

Apartment Living With A Boxer

If you have hard, slippery floors — which many of us do — this can lead to slipping and sliding that may look pretty funny but which runs the risk of injury at the time, and damage to the joints later, once your Boxer reaches middle age.

If you have tiles, floorboards or other gripless surfaces, consider rugs or curtail your boxer’s running indoors.

Too much time on non cushioned surfaces without much grip — especially running and jumping on these surfaces — can make Boxer puppies prone to a developmental abnormality known as knuckling where the front legs bend disfiguringly.

Make sure your new Boxer puppy spends as much time as possible on natural, soft surfaces like grass and dirt.

Consider laying down carpet, rugs or mats where he spends most time indoors.

It’s also important to know your dog well enough that you can predict the kinds of situations that will spark the zoomies.

You don’t want, for instance, your Boxer hitting a patch of grass beside a road and shooting off, yanking the leash out of your hand and dashing into the path of oncoming traffic.

A long line like the Viper Biothane All-Weather Tracking Lead will allow your Boxer the freedom to zoom around, while you retain the ability to pull him up if need be.

Do Boxers Grow Out Of The Zoomies?

The zoomies typically occur at least once a day during puppyhood, often at a predictable time — early evening is popular.

They decrease in frequency as a Boxer matures, but you will still see them whenever your wigglebutt is super energized, throughout the lifespan.

How Long Do Boxers Live?

Most owners love them!

The zoomies are a joyful expression of Boxer dog exuberance.

But they are also a result of pent-up energy or contained frustration.

So, if your Boxer is engaging in them a lot, it can be a sign he needs more physical and mental activity.

Even on rainy days, when you’re stuck inside with your Boxer, you can keep him happily occupied with a raw meaty bone on a waterproof mat or towel, or by teaching him tricks.