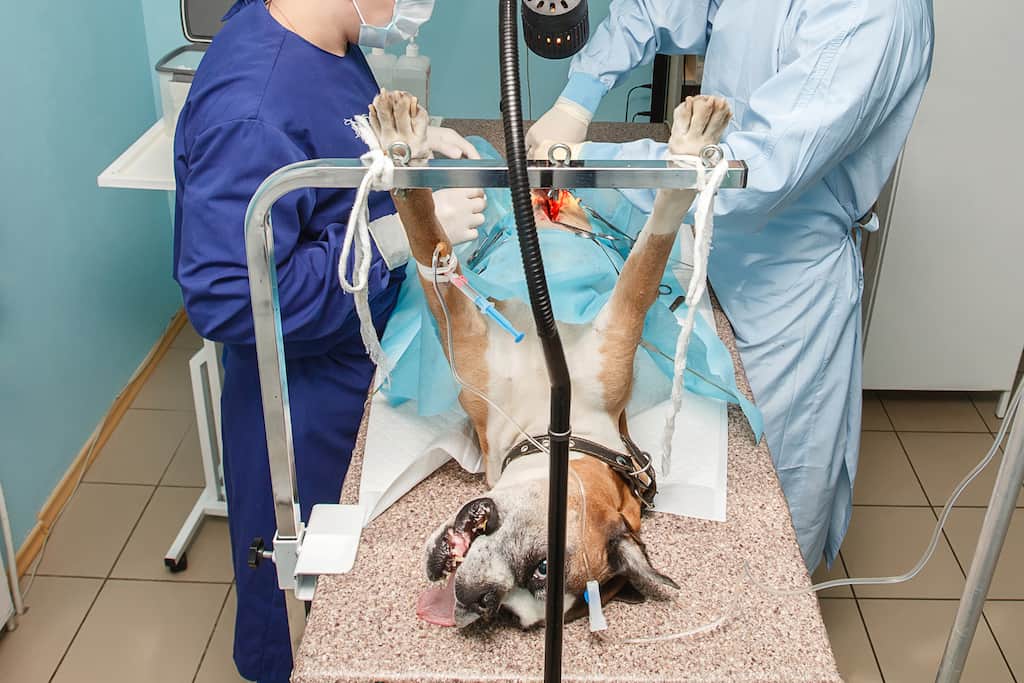 Boxers should never be given the drug Acepromazine because it can cause potentially fatal adverse reactions.

Unfortunately, not all vets are aware of the risks.

As an owner you need to be proactive to make sure your Boxer does not receive Acepromazine, either for anxiety, as a pre-anaesthetic agent, or as a calmative after surgery or during travel.

I am not a vet. This post is intended for general informational and educational purposes only. I encourage readers to see my full disclaimer.

Acepromazine, or ACE, is the most commonly prescribed tranquilizer in veterinary medicine.

It is often used as a preanesthetic agent.

It is also prescribed in oral form to keep dogs calm after surgery and for owners who want to sedate their dogs for travel.

How To Teach A Boxer To Ride In The Car
Can Boxers Travel On A Plane?

It’s even prescribed to manage behavioral issues that really can, and should, be managed without drugging the dog — except in cases of absolute last resort.

Why Is Acepromazine Dangerous For Boxers?

It has been well known in the Boxer community for at least the past 20 years that Acepromazine can cause:

Even Boxers that have tolerated Acepromazine in the past have gone on to have adverse reactions later in life.

The effects can show immediately, or hours later.

Some suggest European or British bloodlines are most at risk.

But there have been plenty of cases in the United States.

Vets in diverse countries including the United States, Canada, the United Kingdom, Australia and Greece have all described the same phenomenon.

And do you know the origins of your Boxer’s bloodline anyway?

What Is The Difference Between American & European Boxers?

How Does Acepromazine Hurt Boxers?

The pharmaceutical company Novartis’ own product insert for Acepromazine reads:

“In some dogs, particularly Boxers and other short-nosed breeds, spontaneous fainting and syncope (loss of consciousness due to low blood pressure) may occur, due to sinoatrial block caused by excessive vagal tone, and an attack may be precipitated by Acepromazine.”

It is not definitively known whether the detrimental effect that Acepromazine has on Boxers’ hearts is a true breed sensitivity to the drug.

It’s possible it’s more a case of the drug interacting badly with underlying heart problems, to which Boxers are predisposed.

The problem is, heart disease often doesn’t show symptoms until later in a Boxer’s life.

So it can be present without the owner, or the vet, knowing.

So Your Boxer Has A Heat Murmur? Don’t Panic. Read This

From an owner’s point of view, the precise mechanism through which Acepromazine does harm doesn’t really matter.

What we know is that this drug has a track record of causing problems in Boxers.

So it makes sense to err on the side of caution and stay away from it, especially given there are plenty of other drug choices.

Other Breeds That Should Not Receive Acepromazine

Boxers are not the only breed badly affected by Acepromazine.

The drug is also problematic for giant breeds and Greyhounds.

A gene mutation found in Collies, Australian Shepherds and Shetland Sheepdogs means these breeds, too, are vulnerable to exaggerated sedation and respiratory depression from Acepromazine.

Won’t My Vet Already Know This?

While it would be nice to think that if there was a problem with a drug, all vets would know about it… that simply is not the case.

Warnings about Acepromazine and Boxers have popped in and out of veterinary drug manuals over the years, including Plumb’s Veterinary Handbook.

Depending on which edition your vet is referencing, she may be unaware of the danger.

Some vets dismiss concerns raised by owners, and want to use the drug anyway.

Others regard it as safe as long as you use reduced amounts.. when, in fact, there are reports of Boxers collapsing after very small doses of Acepromazine.

Yet others try to mitigate the risk by adding other “anticholinergic” drugs such as Atropine in combination with Acepromazine.

But this is not foolproof.

Boxers have had adverse reactions to ACE even when anticholinergics are given.

The upshot of all this confusion is that it’s up to you.

You must advocate for your dog and be firm about not using Acepromazine.

Owners report vets happily prescribing ACE for Boxers for things like anxiety and to keep them calm during fireworks.

There can be a view amongst vets that there is “no scientific evidence” for Acepromazine sensitivity in Boxers.

If this describes your vet?

While no-one might have seen fit to dedicate funds to an official study, Acepromazine sensitivity in Boxers is certainly borne out by the experience of many owners and veterinarians.

Veterinary Warnings About Acepromazine And Boxers

The Veterinary Information Network, for practicing vets, at one time carried an announcement in its cardiology section, acknowledging a breed sensitivity to Acepromazine and recommending it should not be used in Boxers.

The announcement was prompted by several adverse reactions within a very short space of time at the veterinary teaching hospital at the University of California, Davis — all of them in Boxers.

A range of veterinary textbooks and publications include references to the problems caused by Acepromazine in Boxers.

It is so well-established that it’s even got a name: “Boxer-ACE syndrome”.

In Veterinary Anesthesia and Pain Management Secrets, Stephen A Greene describes it as “..a dramatic event experienced by a generation of veterinary clinicians, especially in the United Kingdom.

Some clinicians report that doses as low as 0.01 mg/kg given subcutaneously have induced collapse in an otherwise healthy animal.”

James Gaynor and William Muir’s Handbook of Veterinary Pain Management says, “Some Boxers have demonstrated pronounced side effects and have even died after administration of Acepromazine as an adjuvant to opioid analgesia.”

According to the 2004 book Shelter Medicine for Veterinarians and Staff, “Acepromazine is safe in healthy young adult animals, but should be avoided in patients with a known seizure history, liver disease, heart disease, geriatric or pediatric patients, any dehydrated animal, and Boxers.”

The American Boxer Club, numerous Boxer breeders and many Boxer rescue organizations continue to do their best to raise awareness about the inappropriateness of Acepromazine for Boxers.

What Can You Do To Protect Your Boxer?

If there’s ever an emergency and your Boxer needs urgent surgery, there is a good chance you will be too distressed to remember about Acepromazine.

So, talk to your vet in advance.

Have them officially note in your dog’s file that Acepromazine is never to be used.

Do your best to reiterate this if your Boxer ever needs surgery or sedation for a procedure or diagnostic scan of any kind.

Remember that while the vet wears the white coat, you are the owner and the ultimate decision about the care of your animal is yours.

Ask what drugs will be used instead of Acepromazine, so that you’re sure your vet has put an alternate anesthetic protocol in place.

It’s worth asking whether the clinic EVER uses Acepromazine on Boxers.

Their answer will tell you a lot about their understanding of the breed and how careful they are.

If a vet is happy to use Acepromazine on a Boxer?

Given the possibility that ACE sensitivity may run in family lines, it’s also worth asking your Boxer’s breeder whether any of your dog’s relatives have ever had problems with Acepromazine.

A Sidenote: Boxers And General Anesthetic

Even if your vet doesn’t use Acepromazine, there are a few other things you should know if you are contemplating a surgical procedure for your Boxer — including neutering or spaying.

All anesthesia carries risks and those risks are elevated for Boxers.

In a lecture published in DVM 360, veterinary anesthesiologist Dr Lesley Smith describes how brachycephalic, or short nosed, breeds like the Boxer typically have the “classic four” anatomical features that can make intubation and airway management difficult.

To look after brachy breeds like Boxers, the anesthetic procedure has to be done a little differently.

For instance, Boxers shouldn’t be preoxygenated prior to intubation.

They should never be extubated until they are awake enough to actively spit out the tube themselves.

If a surgery is unavoidable, it’s a good idea to talk with your vet beforehand.

Satisfy yourself that these measures will be taken with your dog.

When Should I Spay Or Neuter My Boxer?

Other Drugs That Can Harm Your Boxer

In addition to Acepromazine, other commonly given drugs can pose serious problems for Boxers.

Most of us are now aware of the overuse of antibiotics and of the dangers associated with this practice, whether it be damage to the individual dog’s gut micro biome or the development of antibiotic resistance.

But what about other arguably over-prescribed drugs, namely steroids like prednisone which interfere with almost every bodily process and have been associated with serous and long-lasting health problems?

What Prednisone Did To An 18mo Boxer

And then there’s the over-the-counter antihistamine Benadryl, which most owners regard as harmless and use as their go-to for hives, often on the recommendation of their vets.

Benadryl For Boxers: Cautions & Alternatives
Why Do Boxers Get Hives?

Sometimes these drugs may be unavoidable.

Often, though, there are safer, more effective options.

Educate yourself so you know the downsides to these drugs and can make informed choices on behalf of your Boxer.

Discuss Acepromazine with your vet.

Hopefully you have a practitioner who is experienced with Boxers and would never consider giving ACE to your Boxer.

You are well within your rights to insist it is never used.

Will every Boxer drop dead from Acepromazine?

But why take the risk with yours?