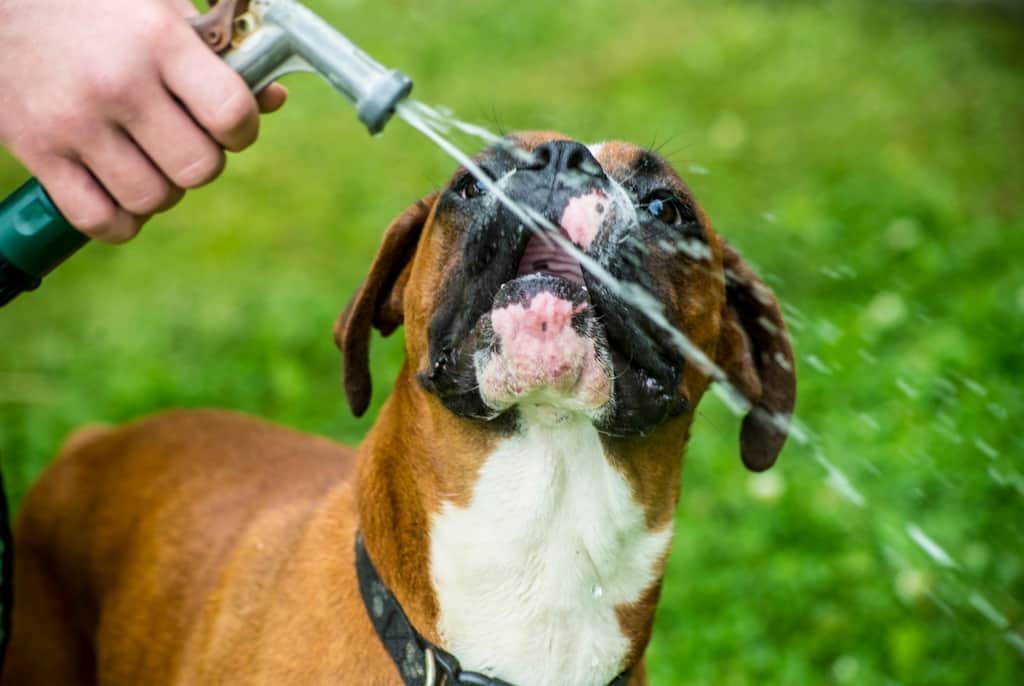 Owners are increasingly aware of the need to avoid additives and to carefully scrutinize the ingredients in their dogs’ food.

But many of us don’t think twice about filling our dog’s water bowl straight from the tap.

It might surprise the average Boxer owner to learn that avoiding tap water is a powerful way to minimize a dog’s exposure to toxins. Spring water or filtered water is a much healthier alternative.

The US Environmental Protection Agency regulates more than 90 contaminants in tap water. These impurities include traces of pesticides, industrial run-off and disinfectants used in the water treatment process.

Even without counting water contamination scandals like those in Flint, Michigan and the one Erin Brockovich fought against in Hinkley, California, drinking water in the United States is far from optimal.

It contains many contaminants that are legally permissible but known to cause cancer and a multitude of other health problems affecting just about every organ in the body.

Some of the regulated contaminants are not allowed to be in tap water at all.

But many are permitted, as long as they’re in small concentrations.

Though minute, these amounts can be above the levels recognized as posing a risk to human health.

According to the EPA it’s because of the limitations of current water treatment technology and cost considerations.

When it comes to chlorine and fluoride, these substances have been deliberately added as part of the water treatment process, to control microbes and prevent tooth decay.

What Is In Tap Water?

You can’t smell or taste them but the EPA-regulated contaminants known to be in tap water include:

A further 97 chemicals and 12 microbes are known, or anticipated, to be in public drinking water but not currently regulated at all.

The list exists because it’s expected the contaminants may require regulation in future.

According to The Giant Book of Boxer Dog Care, fluoride is “exceedingly toxic” to dogs.

A number of human studies have found an association between fluoride and osteosarcoma.

Osteosarcoma is the leading cause of bone tumors in dogs, with 10 000 new diagnoses made every year in the US.

It’s one of the cancers Boxers are considered predisposed to.

A 2014 study published in The Lancet classified fluoride as a neurotoxin, finding a seven point drop in the IQs of children who drank fluoridated drinking water.

Other studies have suggested a similar effect even passes to the unborn babies of pregnant women drinking fluoridated water.

Most European countries do not add fluoride to their water supply.

Dogs Naturally Magazine warns that fluoride’s effects are cumulative and that it can cause a condition called skeletal fluorosis in dogs.

The early symptoms are stiffness and sore joints.

The disease progresses to look similar to (and may be liable to be misdiagnosed as) spondylosis or renal osteodystrophy, which is abnormal bone growth resulting from kidney disease.

Incidentally, you should never use water additives marketed as freshening your dog’s breath or cleaning his teeth.

These are chemicals that don’t just affect your Boxer’s mouth.

To keep your Boxer’s teeth gleaming white and his mouth healthy, all you need to do is feed plenty of raw meaty bones, as described in vet Dr Ian Billinghurst’s book Give Your Dog a Bone: The Practical Commonsense Way to Feed Dogs for a Long Healthy Life.

What Kind Of Water Is Safest For A Boxer Dog?

Otherwise, you have several choices.

Spring water is the most natural option.

Note that some bottled water can contain fluoride but the FDA does not require it to be disclosed on the label, so you need to call the maker to find out.

100 per cent of minerals and particulates are removed from distilled water.

But a lot of volatile organic chemicals (VOCs) remain.

Integrative vet Dr Karen Becker, described as “the most followed vet in the world”, says that distilled water is not a good idea.

Because it contains no calcium, she believes it causes a profound mineral leaching effect over time.

A water filtration system for your taps, fridge or pitcher is another option.

Make sure the filters actually filter out fluoride, as many don’t.

These mainly address taste and cloudiness.

They don’t remove fluoride or many other harmful chemicals.

Be aware that with the average RO system, you lose 50-75 per cent of the original water.

These are a great, very effective way to remove fluoride, pesticides, metals and pharmaceuticals.

In her practice, Dr Karen Becker has observed an uptick in kidney and bladder problems in dogs and cats drinking alkaline water.

The benefit that some humans have anecdotally experienced from alkaline water is now thought to come not from the pH of the water, but from the hydrogen this alkaline water contained because of the way it was made.

Hydrogen has an anti-oxidant, free-radical scavenging effect and can reduce inflammation.

Studies have found there may be health benefits from drinking hydrogen-enriched water.

How Much Water Should My Boxer Drink?

That means a 70 pound (31kg) boxer should drink about 11 cups (or 2.5 litres) of water per day, which is about the same as an average human.

Keep in mind a Boxer’s water consumption has a lot to do with the weather (both temperature and humidty) and the dog’s activity levels.

It’s normal to drink more in summer and after exercising, since moisture has been lost in salivation and panting.

Raw-fed Boxers will drink dramatically less, since you can bet these benchmarks were derived from kibble-fed dogs, which are essentially eating a dehydrated diet.

Fresh, whole foods contain a lot of water within them and so your dog will be much less thirsty.

The Role Of Water In A Boxer Dog’s Body

Much of a dog’s body is made up of water.

Blood is 93 per cent water.

Water plays many roles in a dog’s body.

However it’s possible that drinking a lot with meals may dilute gastric juices and potentially compromise digestion.

Hydration is important for the body’s constant detoxification processes.

Staying hydrated supports the flow of lymph and the moving out of stored wastes.

Why Does My Boxer Drink So Much Water?

If your Boxer’s water intake has significantly and persistently increased for seemingly no reason, you may be concerned he is unwell.

Excessive thirst, known as polydipsia, can be associated with:

As with eating, it’s best if your Boxer drinks slowly and consumes small amounts of water at a time.

Though vets don’t really know what causes gastric torsion or bloat, guzzling large quantities of food or water may be a risk factor.

You can offer water in small bowls only and supervise your dog’s water consumption.

A slow feeder bowl like the Outward Hound Fun Feeder can be used for water as well as food.

All bowls should always be on the ground, not elevated — the latter also increases bloat risk.

Allow your Boxer to rest a little after strenuous activity so that he’s no longer panting by the time he goes to the water bowl.

Make sure your Boxer has constant access to water so he doesn’t get so thirsty he then empties a whole bowl at once.

Staying Hydrated When A Boxer Is Sick

Sometimes a dog will self fast.

When this happens don’t force feed your Boxer, but make sure fresh, cool water is always available.

How Fasting Helps Your Boxer Dog

If your dog has diarrhea or has been vomiting, and you’re concerned he’s not staying hydrated, you can syringe water into his mouth.

Fruits like mangoes, bananas and especially watermelon have a very high water content and are suitable for dogs.

Watermelon should be fed on its own, separate from both meat and other, fruit.

This is because it digests so much faster than anything else and if fed combined, will result in less efficient passage through the alimentary tract, with the potential creation of toxic byproducts and digestive conflict.

Fruits A Boxer Can (And Should) Eat

Wolves can go for extended periods without eating when prey is scarce, but it’s said that a dog can only go three days without water.

Water absorbs toxins from the air.

It’s why when you want to remove the odor from a freshly painted room, you leave out a bucket of water.

Your dog’s bowl is a magnet for toxins, which he will then ingest.

Make sure you replace your Boxer’s water as often as possible, at least twice a day.

Offering fresh, pure water is something you can do on a daily basis to boost your Boxer’s health.

Spring or filtered water is infinitely preferable to tap water, which has been chemically treated and contains many unavoidable contaminants that are known to cause disease, including traces of pesticides and even pharmaceuticals.

These contaminants might be present in small quantities, but water is something your dog consumes regularly, and toxicity can accumulate over time.

Every chemical exposure you can spare your Boxer, the better off he’ll be.