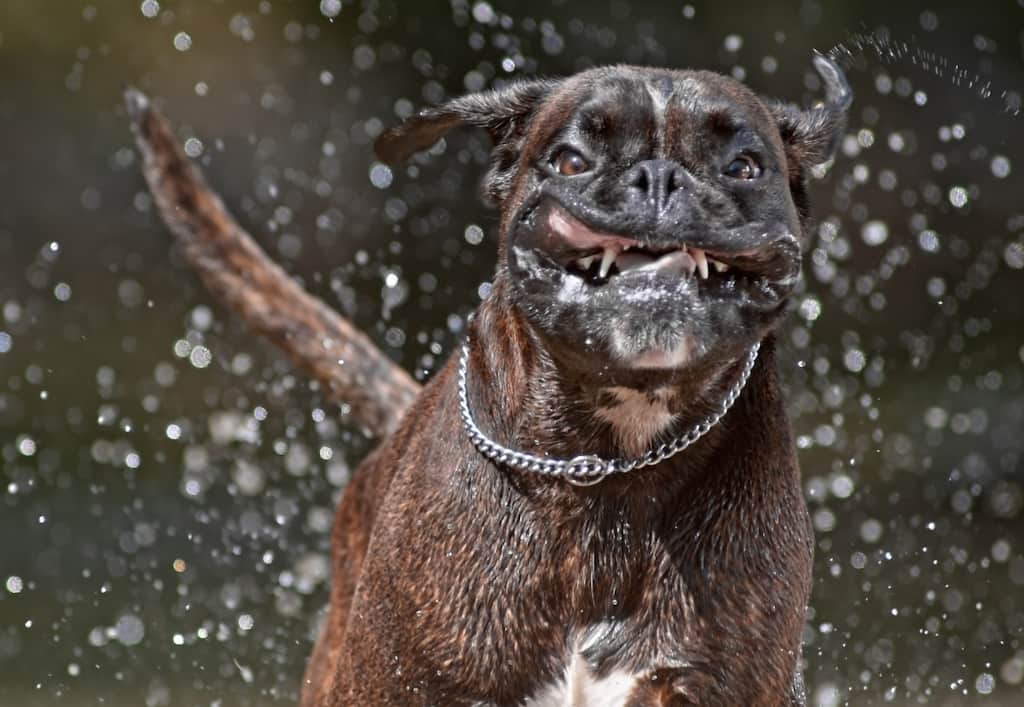 A love of water is a long-established trait in Boxers.

In his definitive reference book on the breed, published in 1947, John P Wagner tells us, “The Boxer loves water passionately..and they are great swimmers.”

70 years of Boxers later, they are still the same dog.

Most Boxers enjoy swimming. Even those that prefer not to actually swim typically love playing in water, whether it’s a garden hose or a river. And for a Boxer, there is no better place than the beach.

If your dog is a little hesitant around water, and you’d like to encourage him, there are things you can do.

How To Acclimate Your Boxer To Swimming

Number one, don’t force your Boxer to get in water.

This is the fastest way to ensure he develops a fear of it.

Number two, this is much easier somewhere natural like the beach, or a river or lake.

A swimming pool might be convenient because it’s in the backyard but for learning it is less likely to lead to success.

Mostly because a pool has a much more difficult, scary and far-less-gradual entry and exit point.

Even if your eventual goal is for your dog to be able to swim in your pool at home, start somewhere easier.

If your dog isn’t enjoying it at any point, abort the exercise and revert to just spending fun time and walks on the beach. Try again a few weeks or months later.

Why Water Is Great For Boxers

Swimming, and even running or walking through water, is great low impact exercise.

Sand stresses your Boxer’s joints much less than a concrete sidewalk.

Joint Problems In Boxers: Causes And How To Prevent

Somewhere like a beach is also great because it allows for play, rather than the repetitive action of a straight walk around the neighborhood, which most Boxers find much more dull and boring too.

Running With Your Boxer: 5 Things Owners Should Know

Plus, beaches are generally places where you can safely give your Boxer a much needed off leash romp.

Being wet also helps keep a dog cool, countering the heat stress that Boxers can be susceptible to.

Keep an eye on the time and decide before you start what time you need to leave.

Otherwise, it’s easy to lose track and stay too long at the beach, because it’s so much fun for both you and your Boxer.

Be mindful that there are real structural reasons that Boxers aren’t generally regarded as water dogs, as compared to retrievers and spaniels that were bred for this environment.

Their short snouts can make breathing difficult, even on dry land.

Their deep chests and highly muscled physiques kind of make them like track and field athletes asked to compete instead in the 200 metre freestyle.

Not to mention, if your Boxer’s tail is docked, he has no rudder to steer in the water, so he’ll have to work even harder.

Why Do They Dock Boxers’ Tails?

You may like to consider a life vest like the to offer some buoyancy if your dog is swimming in deeper water.

Stay in the shallows where he can always opt to stand up or wade out, and let him make the rules.

Avoid Eating Two Hours Either Side Of Swimming Sessions

This goes for all vigorous exercise, but the beach is particularly risky because it’s so easy to get swept up in the moment.

Anecdotally, more than a few dogs (of all breeds) have died after suffering deadly bloat during a beach trip.

The causes of bloat, or gastric torsion (also known as GDV) are not well understood but there appears to be an association with exercising close to meals, or close to drinking large amounts of water.

The condition is a veterinary emergency requiring surgery to avoid death.

Unfortunately, Boxers are at increased risk due to their deep chests, so it’s worth erring on the side of caution.

You may want to have a collapsible water bowl like the on hand so your Boxer can have a drink, but don’t let your dog guzzle water at the beach or immediately after getting home from the beach.

Never let your dog drink or eat when he’s worked up enough to still be panting.

Consider whether it’s a good idea to have your Boxer immerse in your pool.

Swimming pools are treated with chemicals including chlorine.

At the very least make sure your dog never laps the water and rinse him off thoroughly with fresh, clean water as soon as he’s out, so the chemical residues don’t sit on his skin.

There are some invisible threats at the beach.

These include salt water bacterial blooms.

This study documents the death of nine dogs after coming into contact with seawater along the Swedish coast of the Baltic Sea during a normal Summertime bloom of the bacteria Nodularia spumigena.

The dogs developed symptoms within a day of exposure, showing jaundice, dehydration and high levels of waste products in the blood, like when the kidneys have ceased to filter properly.

The dogs died or were put down within two weeks.

In general, the risk from occasional algal blooms is probably far less than is posed by the regular use of weed killers and lawn care chemicals on city parks, sports fields and grassy roadside verges.

However, it’s worth teaching your dog not to drink from the ocean or from lakes and streams.

Be observant and keep out of the water when you notice anything strange or when the water appears to be tainted by an algal bloom.

It’s a good idea to avoid swimming in lakes, streams and at the beach after storms, when runoff from stormwater drains can wash water laden with chemicals into the waterways.

Always rinse off your Boxer’s coat with fresh water in the showers at the beach or as soon as you get home to remove any contaminants from his skin and especially to avoid him ingesting them when he grooms himself.

Pay particular attention to nicks and cuts your dog might get playing at the beach or clambering over rocks on the shore.

Rinse them in fresh water as soon as you can, since research tells us bacteria proliferate in canine wounds exposed to sea water.

Remember the beach, even a city beach, is still a wild environment — and one your Boxer is not particularly familiar with or in a position to make good judgments about.

Your inquisitive explorer might encounter sea creatures like stingers, both in the water and washed up on the sand.

There may well be hazards like plastic bags, fish hooks and even discarded food.

Teach a strong “leave it” command, make sure your dog knows not to eat something unless it’s food you’ve given him, and supervise his wanderings.

Seashells are a potential hazard, too.

It’s a classic Boxer move to find, dig up and then cavort around with a shell in the mouth. Make sure your dog only carries in his mouth objects large enough to not be accidentally swallowed or choked upon.

Also consider whether these are a risk for chipping teeth.

Plan your beach visits to avoid the harsh midday sun.

White Boxers are particularly vulnerable to sunburn and skin cancer but many Boxers have white around their eyes and muzzles.

We don’t recommend sunscreen as it contains chemicals and is usually licked off and ingested.

However, a lightweight sun shirt like the Gold Paw Sun Shield can come in handy at times.

While being mindful of the sun and the heat, remember that a Boxer can quickly catch a chill after swimming.

His thin coat gives him little insulation from the cold and, though he might have been willing to happily venture into frigid water, it gets cool quickly once the excitement wears off and you stop moving around.

Have towels on hand in the car or in your bag, and dry your Boxer off right away.

Crank that heater on the way home if it’s chilly.

Boxers can make a game out of anything. For backyard water fun, try:

Concluding Thoughts: What If Your Boxer Really, Truly Doesn’t Like Water?

You and your dog can still have plenty of fun at the beach or river.

Aside from just walks on the sand, digging and following the fishy scents, you might like to experiment with kayak rides if your Boxer shows interest.

As with all training, starting young is your dog’s best shot at getting comfortable with unfamiliar activities.

Ultimately, let your Boxer have his preferences.

Not all dogs will like everything you have in mind for them.

Whether or not he likes swimming, at least make sure you get your pup used to baths.

Overwashing a dog can cause itchiness and other skin problems, but sometimes it’s necessary and you don’t want it to be a stressful experience for your dog.

How Often Should You Wash A Boxer?
Follow Shiva's Adventures