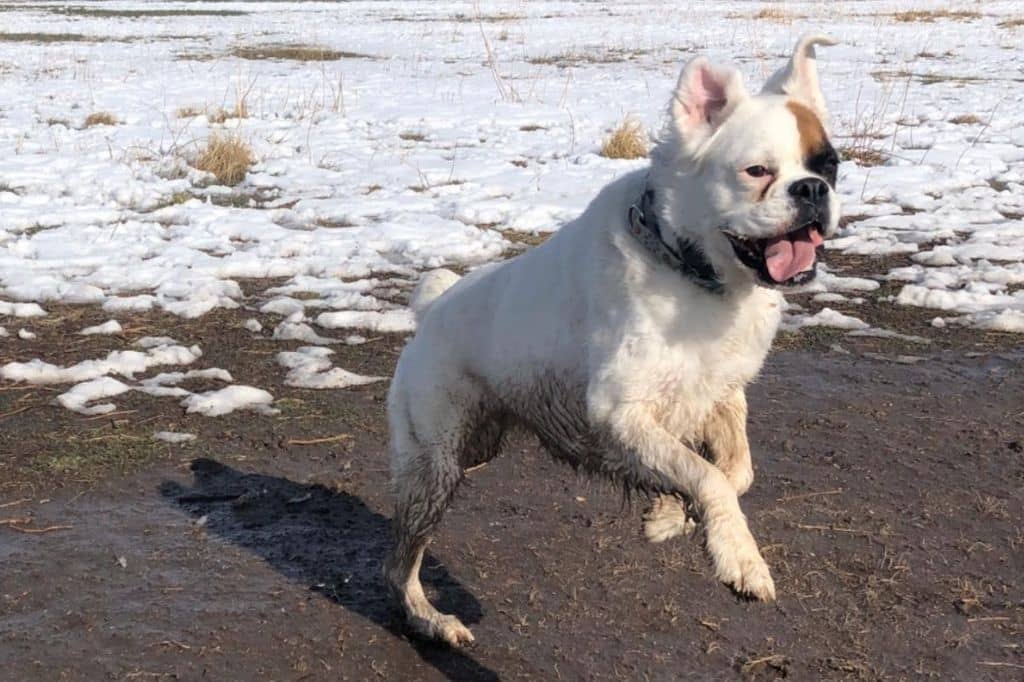 What do you get when you cross a woolly mammoth with a wigglebutt?

No, it’s not CGI. Your eyes aren’t playing tricks.

Boxer dogs with long coats are a rare but undeniable part of the Boxer family.

Although science is yet to give definitive answers, long haired Boxers seem to arise both from a likely gene mutation in purebred Boxers and as a result of good old fashioned cross breeding.

Let’s try to untangle the mystery.

Can Boxers Have Long Hair?

Some things are distinctly Boxer.

The color of the Boxer coat is allowed to be fawn or brindle, with or without white markings, and white Boxers are granted limited registration by the American Kennel Club.

But the American breed standard defines Boxers as having strictly short, tight-fitting coats.

There is some minor variation in coat length in Boxers that does fall within the standard.

Boxers with American bloodlines typically have super smooth coats with hair so short it appears almost like a second skin whereas Boxers from European bloodlines can have coats that appear thicker and ever so slightly longer.

The European standard, though, still describes the Boxer coat as “short, hard, glossy and close fitting”.

Despite this, there is no denying the existence of dogs that appear to be Boxer in every way — physically and temperament-wise — but which have very un-Boxer-like locks.

These non-regulation Boxers are winning hearts, some with their own social media accounts and fan bases.

But are they actually purebred Boxers?

It depends — but the available evidence suggests there’s a good chance at least some of them are.

What Causes A Boxer To Have Long Hair? The FGF5 Gene

Nobody knows for certain what’s going on with these dogs.

There is speculation that a mutation in a gene known as the fibroblast growth factor-5 (FGF5), which controls hair length in dogs, could be involved.

The variants that produce long hair are inherited in a recessive fashion i.e. dogs can be short haired but quietly carry the long haired gene.

This means short-haired dogs can produce long-haired offspring if they happen to be bred with another dog, also short-haired, but with the same gene for long hair lurking in its DNA.

According to DNA testing company Embark, the occasional long haired Dalmatian can arise from variations in the FGF5 gene.

This genetic mutation is also thought to be behind the emergence of long hair in the French Bulldog, with long haired Frenchies are known as “Fluffies”.

Kennel clubs around the world — thought not in the US — already recognize long haired Weimaraners, which can be born to traditional, short haired parents.

Here, too, the FGF5 gene mutation is understood to be responsible.

There are also long and short haired Corgis.

This is interesting because Corgis have been cross bred with Boxers to introduce the bobtail gene that gives a naturally short tail, removing the need for tail docking.

Could the recessive FGF5 mutation have piggybacked into Boxers that way?

No known research has yet been done to investigate long hair within the Boxer breed.

There is a bully breed called the Mammoth Bulldog, also known as a Mammut, that looks not dissimilar to a long haired Boxer.

Mammuts are not pure bred dogs, and are not recognized by the American Kennel Club.

The Bully Breeders Association describes these dogs as a reestablishment of the original working Bulldog of the 1800s, which had longer hair.

The long coat of the Mammut often presents as feathering around the ears, back of the legs and tail.

The American Boxer Club’s breed standard specifically states that a Boxer’s coat should be short, shiny and lying smooth and tight to the body.

So long-haired Boxers definitely don’t conform to the breed standard.

Then again, neither do white Boxers, which used to be euthanized at birth …or Boxers with blue eyes or any other number of “faults” that would see them perform poorly in the show ring.

Many breeders would say these characteristics should be bred away from, but none would suggest these dogs are any less Boxer.

Whether a particular fuzzy Boxer is purebred depends on exactly how the long hair has arisen.

Scenario one is that a long haired Boxer results from a random cross.

In this case, clearly the pup is not a pure Boxer (not that it matters!).

Remington is one such example.

His owner Brigitte Oster says Remy’s parents were both rescues: a full Boxer mother, according to the shelter, and a father that’s half Boxer, half Mastiff.

Two of Remy’s siblings also ended up with long hair.

This dog would still be 100% Boxer, just a “non-conforming” one.

This would seem to be the case for Olive.

“I have had a lot of nasty remarks about Olive from other breeders and Boxer people.

It’s like this: she is not a show dog, she is my pet and I love her with all my heart.

That, I feel, should be the most important thing for a dog.”

Iris, pictured in full flight at the top of this article, is another fuzzy Boxer.

Her owner Kelly Miller thought she was a Boxer mix when she fostered and then adopted her.

Since then, she has DNA tested Iris twice, using two different commercially available tests, and she’s come back as 100% Boxer both times.

Her entire lineage on both sides shows nothing but Boxer.

“Most people think she is a Boxer mixed with a Spaniel.

The reception is mostly awe and bewilderment.

I get a lot of comments on how pretty she is and how unusual looking she is.

There are always a few people who feel there is no way she is full Boxer because of the hair.”

We can only imagine the grooming routine is somewhat more involved than coat care for the average Boxer.

Regardless of what causes long hair in Boxers, one thing’s for sure: they are rare creatures.

How rare, we can’t reliably say.

But an informal fuzzy Boxer network is growing, as owners connect with each other.

Where Can I Get A Long Haired Boxer?

It’s not as if you can log on to the American Kennel Club Marketplace and look up breeders of long haired Boxers.

Boxer Dog Diaries is yet to independently confirm any long haired Boxers appearing in litters bred by professional Boxer breeders with established kennels.

If you want a fuzzy Boxer, your best chance is to keep your eyes peeled.

The owners who currently have “fuzzies” typically didn’t go looking for them — they just happened upon them.

Most commonly, owners have adopted fuzzy Boxers from rescue organizations.

A litter including some white Boxers with feathered ears popped up in mid-2021 at a shelter in Kansas.

The puppies were described as “Boxer mix”.

Murphy, pictured below with his pal Koya, has come a long way since his adoption in 2017.

He’s slotted in to a Boxer household and grown his own Facebook page chronicling his adventures.

There’s no telling what the future will bring.

With French Bulldogs, some breeders have begun deliberately pairing dogs that both carry the recessive long haired gene and breeding the trait into their lines to meet consumer demand.

Something similar appears to be happening with “mini” Boxers — more than one breeder now mates Boxers with smaller breeds like the Boston Terrier to produce a downsized hybrid.

Case in point, plenty of Boxer lovers are keen for so called “black” Boxers (which are in fact reverse brindles that look black but show their brindling in bright light).

Many existing breeds have both rough/long and short/smooth coated variations that are both recognized as legitimate.

Think of Dachshunds, Salukis and Border Collies to name a few.

It seems unlikely, but it’s not impossible that Boxers of the future might routinely come in short and long haired versions.

After all, this is how dog breeding has always worked.

Breed standards are not a static thing.

Preferences evolve and breeds are shaped and developed to meet, essentially, human fancy.

As long as the health of the dogs and the betterment of the breed is put first, it comes down to a matter of opinion.

For now, though, long haired Boxers remain a rare quirk of nature — controversial or crowd pleasing, depending on your perspective.

You’d be forgiven for doing a double take when you first clap eyes on a Boxer dog with long hair.

While rare, fuzzy Boxers do exist and they seem to arise both from cross breeding and within purebred lines.

The most likely explanation when long hair occurs in a purebred Boxer is that it’s to do with a recessive mutation of the FGF5 gene, which is already known to cause the odd long haired specimen in other short haired breeds including French Bulldogs, Dalmatians and Weimaraners.

Hopefully further investigation will expand our understanding of long hair in Boxers.

Special thanks to the owners of Iris, Olive, Remy and Murphy for their participation in this article. Photographs used with consent.

Embark, Why your dog’s genetic breed results may not be what you expected, 2020

Housley, DJ E and Venta, P J, The long and the short of it: evidence that FGF5 is a major determinant of canine ‘hair’-itability, Animal Genetics, 2006