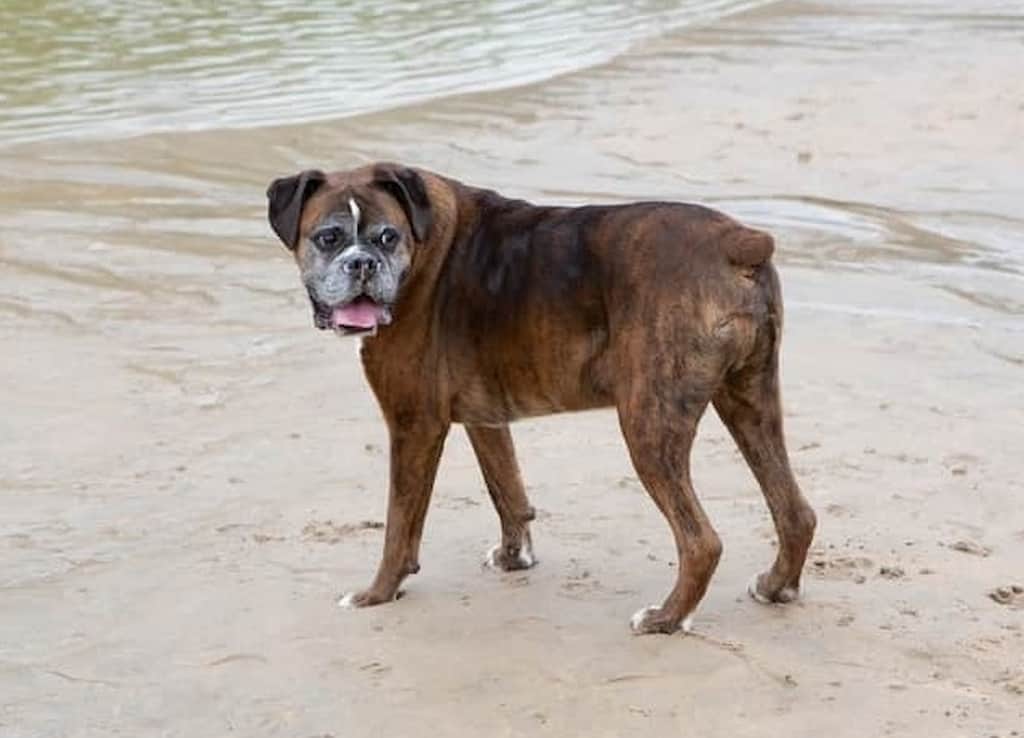 Boxer flank alopecia is a skin condition, also known as seasonal alopecia, that generally coincides with a shortening of the days as winter approaches.

Flank alopecia is characterized by the loss of hair on a Boxer’s flanks often leaving large, irregularly shaped patches of darkened skin that ruin the appearance of the coat.

The problem tends to be cyclical, the hair spontaneously regrowing before falling out again the next year.

Which Boxers Get Flank Alopecia?

It can begin at any time but the average age of an affected dog is four years, and most documented cases are between three and six years old.

According to the veterinary literature on seasonal alopecia, no gender is more at risk and dogs are equally affected regardless of neuter/spay status — although spaying/neutering is known to increase the incidence of many canine health problems.

When Should You Neuter Or Spay A Boxer?

How Serious Is Flank Alopecia In Boxers?

Alopecia (pronounced al-uh-PEE-shuh) is the medical term for baldness and there are many different types of alopecia.

Though it can be unsightly, the dog shows no other obvious signs of systemic disease.

Quality of life doesn’t seem to be affected.

Some dogs have it once and never again.

According to some studies, 20% of dogs have a single episode.

For others, it can be a lifelong condition with cyclic hair loss repeating at the same time each year.

Yet other dogs are fine one year, but lose their hair the next.

Usually, seasonal alopecia has a rapid onset between November and April in the northern hemisphere.

Then the coat spontaneously fills in after four to eight months, though this can take up to 18 months.

Regrowth may be patchy and the shape of the bald patches may remain due to the new hair being of different color and texture.

The cause of seasonal alopecia is not well understood.

As its name suggests, the disorder appears to be triggered by changes in day length.

It’s thought to involve an abnormal response of the hair follicles to the normal changes in levels of the hormone melatonin, secreted by the pineal gland.

The fact that certain breeds seem to have a predisposition to flank alopecia suggests it may have a genetic component.

Diagnosis Of Seasonal Alopecia In Boxers

Though it’s recognizable on sight, formally diagnosing seasonal alopecia can be lengthy and expensive.

Under a microscope, a pathologist will be able to identify the hair follicle abnormalities that characterise seasonal alopecia (abnormally shaped follicles filled with keratin).

Seasonal flank alopecia in Boxers is a diagnosis of exclusion in the sense that a diagnosis is arrived at through a combination of dog’s breed, the dog’s history of hair loss and by ruling out all possible other causes of the hair loss.

Flank alopecia can be an outward sign of an undiagnosed internal problem like hypothyroidism, to which Boxers are also predisposed.

Diseases Boxers Are Prone To

It’s important to rule out other more serious hormonal diseases like hypothyroidism (low thyroid hormone) and Cushing’s (high cortisol) that can cause similar hair loss.

Hypothyroidism is the condition most easily mistaken for flank alopecia, particularly in its early stages, because this hormonal disorder can cause exactly the same kind of hair loss.

A Boxer with hypothyroidism will typically display a range of additional symptoms like:

One documented case of a Boxer diagnosed with hypothyroidism showed no signs other than flank alopecia, slight sluggishness and — upon examination — marginally low temperature and a slow heart rate.

If your Boxer is not itchy, that rules out mange, fleas and other parasites.

Mites (demodectic or red mange) are caused by a sensitivity to and overpopulation of the Demodex mite when a dog’s immune system is unable to keep the mites in check.

Hair plucks, skin scrapings and biopsies will be negative for mites if it’s seasonal alopecia.

7 Reasons Your Boxer Has Itchy Skin

Fungal cultures can rule out ringworm.

If your Boxer has seasonal alopecia that’s been mistaken for a skin infection (pyoderma), antibiotics won’t make a difference.

This kind of hair loss has been associated with the rabies vaccine and steroid injections, with hair loss related to the inflammation caused at the injection site.

There is another form of alopecia called alopecia areata which is a rare autoimmune disorder.

In this condition the hair loss is usually on the head and neck.

Tissue samples can differentiate between seasonal alopecia and alopecia areata.

How Do You Treat Flank Alopecia In Boxers?

Given it’s considered a “cosmetic” condition with little to no impact on the dog’s overall health, no treatment is necessary for seasonal alopecia.

With time, the hair will grow back on its own.

The most you may need to do is provide your Boxer with some extra insulation in the form of a winter coat, as she’s likely to feel the cold more until the bald patches fill in.

We love the Gold Paw Sun Shield Dog Tee as a light cover-up that helps avoid having to explain your Boxer’s appearance to inquiring strangers.

It’s made from divinely soft fabric, with great attention to detail.

The seams are even on the outside, for added comfort.

Fasting is a free, safe and scientifically-proven way to support the natural process of regeneration and renewal at a cellular level.

9 Reasons To Fast Your Boxer
Are You Overwashing Your Boxer?

Some vets recommend melatonin, a synthetic version of the naturally-occurring hormone involved in the regulation of circadian rhythms.

Melatonin may accelerate regrowth and prevent hair loss when given preventatively to dogs with recurrent cases.

It is considered a safe drug “without side effects”.

However, some owners find the drowsiness it causes unacceptable.

Melatonin’s mechanism of action is not known.

Like any drug or supplement, it should be approached with caution.

For humans, Johns Hopkins Medicine advises against melatonin supplementation in anyone who:

In addition, the Veterinary Information Network cautions that melatonin:

Note that melatonin, as a “nutritional supplement” is not regulated in the same way that pharmaceuticals are.

Manufacturers are not required to prove products contain the claimed amount of active ingredient.

A University of Tennessee study of melatonin products revealed enormous variability in melatonin content between brands.

How To Prevent Seasonal Alopecia In Your Boxer

As always, the absolute best you can do in preventive health care for your Boxer is to feed a fresh, natural canine diet and provide an active, healthy lifestyle.

Disorders of all kinds are less likely in a properly fed Boxer.

A good first course of action whenever your dog experiences anything less than vibrant health is to go back to basics and optimize the diet.

Kibble is not healthy food for your Boxer.

Kibble: What Every Boxer Owner Should Know

If your Boxer’s diet is currently based on anything other than raw meaty bones, which are powerfully health-promoting, it’s time to make some changes.

Just as these vets found their patients’ chronic digestive, allergic and metabolic problems disappeared when they replaced processed dog food with home-prepared raw diets, you may well discover your Boxer never has another instance of alopecia once you switch to a correctly composed raw diet.

How To Raw Feed Your Boxer (The Right Way)

Light therapy has anecdotally been used to prevent alopecia.

You can provide this naturally by making sure your dog gets plenty of time outdoors in the sunlight, including the chance to sun bathe a little.

Indoors, provide your dog with lots of natural light via open curtains and sunny spots to snooze.

Numerous breeds can be affected by flank alopecia.

It’s most commonly seen in:

Endocrine Alopecia Or Alopecia X (Not Usually What Boxers Have)

A review of the veterinary literature turns up another condition called endocrine alopecia or alopecia X, which has similarities to seasonal flank alopecia in both symptoms and treatment.

However, this condition tends to be progressive rather than seasonal and can end up with total, body-wide hair loss.

Endocrine alopecia usually affects Nordic or double-coated breeds such as:

Long primary hairs disappear first, leaving a fuzzy, puppy-like coat which then falls out too.

In Boxers, the bald skin that remains is usually, but not always, hyperpigmented as in flank alopecia, is also not itchy and usually doesn’t show any signs of infection.

Alopecia X is also known as:

According to the Veterinary Information Network, “it may be that alopecia X is not one disease but several and we simply do not know how to distinguish them”.

Tests for alopecia X are broad and may include:

As with seasonal alopecia, the most important things to rule out are Cushing’s disease and Hypothyroidism, which can both create endocrine alopecia.

Treatment for alopecia X is a process of trial and error.

There are numerous therapies, treatments often working for one dog but not the next.

The good news is you don’t necessarily have to do anything and the hair should grow back with time.

However, it’s a good idea to take stock whenever something in your dog’s body isn’t functioning as it should.

Could now be the perfect time to switch to that raw diet you’ve been researching?

Melatonin for Sleep: Does It Work? Johns Hopkins Medicine

Wedderburn, Pete, Molly, a four year old female Boxer who had bald patches along both sides of her back, Pete The Vet, 2013