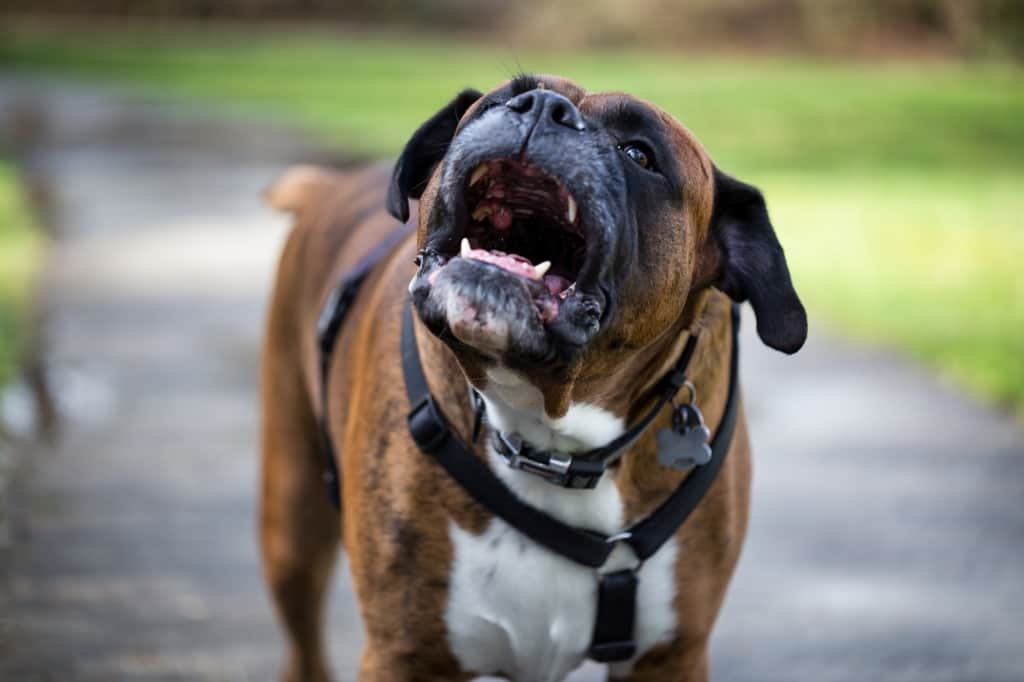 If your Boxer is barking inappropriately, it’s usually a sign one or more of his needs are not being met.

You can stop a Boxer nuisance barking by:

Exactly how to quiet a noisy Boxer will depend on the specifics of when and why your dog is barking.

Do Boxer Dogs Bark A Lot?

All dogs bark in certain situations.

But as far as breed predispositions go, Boxers are not yappy dogs.

Usually if a Boxer is barking, there’s good reason.

Which is not to say Boxers are not vocal.

They have all manner of groans by which they express themselves.

Sometimes new Boxer owners mistake these guttural sounds for growls, but they are just how a Boxer talks.

Why Do Boxers Bark?

There are several different types of barking in a Boxer.

Some barking is appropriate — like when your Boxer barks at an intruder, or to alert you to something specific.

A little barking in play is alright too, as long as it’s not excessive.

An engaged Boxer may bark here and there during obedience training or agility, in an outburst of enthusiasm.

Then there is nuisance barking.

Nuisance barking in a Boxer typically arises out of:

… or a combination of all three.

If your neighbours are complaining that your Boxer is making a racket while you’re out, this is probably the kind of barking you’re dealing with.

In this situation, your Boxer may be barking to self stimulate, as a way to relieve boredom … or to self soothe, as an outlet for pent-up energy or stress.

He may also be barking out of frustration at being cooped up without anything to do.

Or hoping to attract attention, because he’s lonely and craving company.

(Frustration and loneliness can be the cause of barking in a Boxer puppy in the process of being crate trained.)

If your dog is nuisance barking when left home alone, the barking might be accompanied by other undesirable behaviors like destructive chewing.

See also: How To Stop A Boxer Dog Chewing Everything

Don’t leap to the conclusion that it’s separation anxiety.

This is an emotional-psychological disorder characterised by acute distress, extreme destructiveness and efforts to escape like chewing off door frames or making holes in walls, or even busting through closed windows.

There may be urination and defecation indoors.

More than likely your dog is not on this extreme end of the spectrum.

He’s probably just bored, which you can do a lot to remedy.

How To Correct Nuisance Barking In Boxers

However, prevention and cure are achieved essentially the same way, by setting your Boxer up for success through proper care … and responding correctly to barking when it happens.

Firstly, there are whole-of-life things that you can do to set your Boxer up to be generally happier, more relaxed and well adjusted.

These will pay huge behavioral dividends by making barking less likely to happen in the first place.

Then, there are specific tactics you can use in the moment when barking occurs.

To create a happier Boxer less prone to barking and other misbehavior:

This last one requires some explanation.

When your dog is barking, “capture” the behavior by saying, with some energy, “Speak!”

It can help to pair the verbal command with a hand gesture.

You can make a puppet shape with your hand and open and close your fingers for “Speak!”

Then when your dog falls silent, capture that behavior by saying, softly and slowly, “Quiet”.

A hand gesture for this one might be a finger to your lips.

Keep matching these words to the barking and the moments when he falls silent.

Over time your dog will come to make the association.

It’s similar to when you say “Go potty” every time your dog pees and soon he can pee in response to the command.

After a while you can progress to asking your dog to “Speak!” on command and rewarding with a treat.

Often he’ll enjoy this game so much you’ll get a burst of barks.

That’s when you can deliver a “Quiet” command and see if he gets it.

When he falls silent, treat and praise.

Before you know it you will be able to silence unwanted barking by using just the “Quiet” command.

Teaching pairs of opposite commands can be useful in stamping out other unwanted behaviors, like jumping up on people.

See also: How To Stop A Boxer Jumping On People

Perhaps the most effective way to stop a Boxer barking is by using clicker training.

To use a clicker to deal with nuisance barking in your Boxer:

Many repetitions may be required, depending how established the barking behavior is.

How To Stop A Boxer Barking At Owner

Boxers can certainly be stubborn and some may develop a defiant streak.

If your Boxer barks at you, turn your back the same way you would respond to unwanted jumping up.

Withdrawal of attention is a powerful disincentive.

If the barking persists, remove yourself from the room entirely and busy yourself doing something that doesn’t involve your Boxer.

Ignore him until he quietens and stays quiet for quite a few beats.

Reward quiet, calm behavior by returning your attention to your Boxer and granting him interaction once more.

Be sure not to praise your dog excitedly, which can spark another flurry of barking.

How To Stop A Boxer Barking At Other Dogs Or Children

In a puppy this is usually attention-seeking behavior, rather than aggression.

Distract and redirect is the ticket.

If the barking has an aggressive or intimidating intent, a stronger response is warranted.

Deliver a stern “Uh uh” or a “No” so that your Boxer knows this is not acceptable.

Once pup is quiet for a few beats, redirect him to something else.

If the aggressive barking persists, leash your Boxer and remove him from the area.

Sometimes when dogs are over-threshold they are unable to get a grip on themselves.

Putting more distance between the dog and the source of the stimulation can act as a circuit breaker and help him reset.

What To Do About A Barking Boxer Puppy

If your Boxer puppy is barking, it’s generally just part of the puppy phase.

He may just be finding his voice, testing the limits or experiencing a lack of impulse control that will come later.

Still, you want to get on top of it before it becomes habit.

If your Boxer pup is barking when confined to his crate, ignore it.

Do not, under any circumstances, reward your puppy for barking by releasing him from the crate in response to grizzling and yipping.

This will teach him that barking gets him what he wants, and guarantee he does more of it.

If your pup is barking in general life, when outside his crate .. distract and redirect is a good approach.

Clap your hands to interrupt the barking and get your pup’s attention.

Then guide his attention to something more acceptable, like a chew toy.

How Not To Stop A Boxer Barking

There are a range of punitive devices marketed as ways to stop a dog barking.

These and other aversive methods are best avoided in favor of positive reinforcement techniques.

Collars that deliver an electrical shock to your dog’s neck may well do more harm than good to a Boxer.

Remember, for all the Boxer’s happy go lucky persona, this is a sensitive breed.

Shock collars can frighten and physically harm a dog if they’re improperly installed or used, and even if they aren’t, depending on your individual Boxer’s temperament and past experiences.

Use a shock collar and you may end up with a traumatized Boxer and whole new set of behavioral issues.

Anti bark collars that spray citronella in a dog’s face when he barks may seem gentler than electric shock collars.

These products are labelled as non-toxic.

However, any substance with a strong odor can cause irritation to your dog and, if you’re using them to deter barking when you’re out, you will not be there to monitor and to render assistance if your Boxer suffers a reaction.

Just because one spray of the stuff does no harm doesn’t mean your dog will cope if there’s a flurry of barking and he inhales repeated doses.

Harsh methods will cause a Boxer to shut down.

They are gentle-natured dogs.

Violence will only instil fear, undermine trust and damage the dog-owner relationship.

Raising your voice at a dog won’t work.

Particularly in the case of barking, it doesn’t make sense.

Your dog may well perceive your yelling as just the human version of barking.

Rather than upping the ante, you want to be toning down the aggro.

Use your best calm but firm voice.

While you don’t need shock collars, there are a few tools that do merit a place in your anti-barking kit bag.

Boxers are not big barkers.

Problem barking in a Boxer dog is more often than not a symptom of boredom and insufficient exercise and mental stimulation.

There is no need to resort to harsh methods like shock collars.

Tire your Boxer out before you leave for work, give him a focus for his mental energy, and you won’t hear a peep out of him.

Also make sure you’ve gradually acclimated your Boxer to being home alone, if this is when the barking is happening.

Do Boxers Need A Fenced Yard?

13 Reasons Why Your Boxer Is Hyper