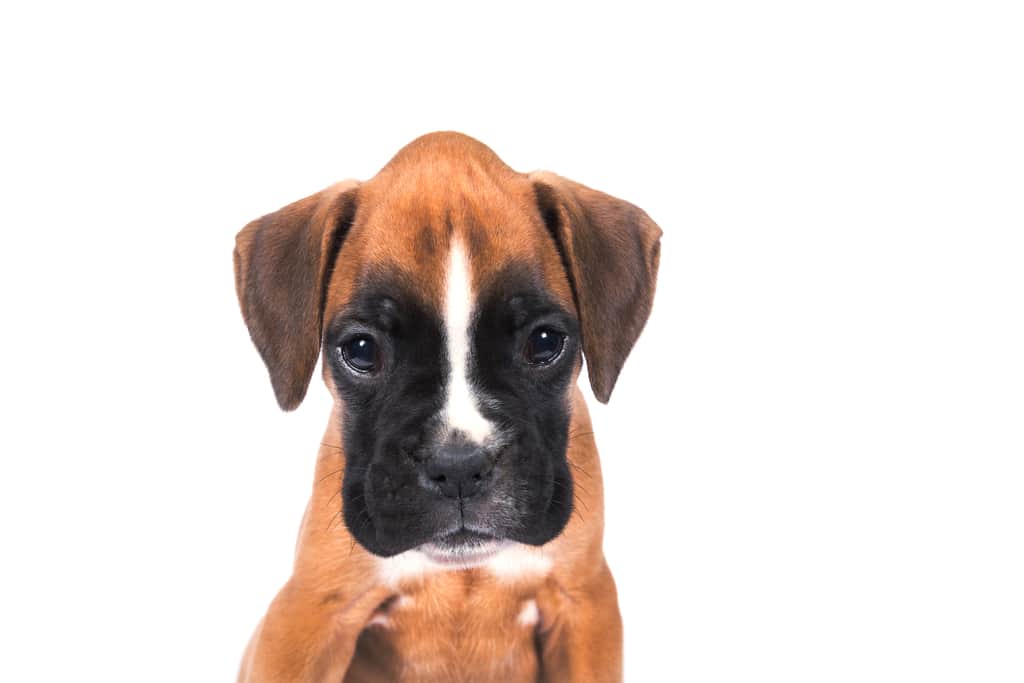 Owners sometimes worry when they notice a prominent bump on the top of their Boxer puppy’s head.

An eggheaded or coneheaded appearance in a Boxer pup is not a defect and will flatten out as your dog matures.

Not all Boxer puppies have a pronounced doming of the head.

Some believe pointed heads in Boxer puppies indicate intelligence, deeming them “smart bumps” — although this is more in the realm of myth than scientific fact.

If your pup’s bump has suddenly appeared, it may be the result of a knock and should slowly go down.

Why Do Boxer Puppies Have A Bump On Their Heads?

The peak or bony protuberance at the back of your Boxer puppy’s head is a normal part of the canine anatomy called the occiput.

The occiput protects the bones of the skull and the encased brain.

According to canine massage therapists and acupuncturists, targeting nerve endings in this region can induce relaxation and calm a dog’s fight or flight response.

Going from front to back, your Boxer’s head is composed of:

The occipital bone extends down back of the head and articulates with the neck, assisting in the movement of the head in relation to the spine.

Does The Size Of A Boxer Puppy’s Egghead Mean Anything?

There are a number of theories, though none have any established scientific basis.

Those who consider the eggheaded appearance a “smart bump” or “knowledge knot” say the higher the bump, the smarter the dog.

When Will My Boxer Puppy’s Conehead Go Away?

Your dog’s occiput will become much less obvious as he grows up and the head takes on its adult shape, flattening and filling in with muscle and flesh.

Boxers are a slow maturing breed, their bodies continuing to grow and develop until two or even three years old.

In some dogs, hints of the occiput may remain for life.

Because it protrudes, the occiput can get knocked on things.

If your Boxer puppy’s head has suddenly changed shape, seeming to develop a large lump almost overnight, it can be quite alarming.

However, your pup may simply have bumped himself on a table or the dog door.

You may be seeing a hematoma (bruise) that has formed on top of the occiput.

This swelling may initially feel soft and fleshy but progressively harden.

A hematoma should slowly resorb on its own, but this is a slow process that can take weeks or months. The pup will be eating and drinking and playing as normal, completely unbothered.

If you’re concerned, run it past a trusted vet — ideally one experienced with Boxers.

More than likely though, all is well and this is the occiput doing its job to protect the brain from injury.

Other Breeds With Large Smart Bumps

Boxers are not the only breed that can have a pronounced occiput.

Every dog has the bone, it’s just a matter of how obvious it is.

“Smart bumps” tend to be most evident in breeds like:

Artists made sure to represent this anatomical feature in the cartoon dog Pluto, variously said to be either a mixed breed or a Bloodhound.

The prevalence of large bumps in scent hounds has given rise to suggestions the occiput is connected to a dog’s sense of smell, though this is not proven.

Another change owners sometimes notice in their Boxer puppies is the sudden appearance of “flying nun” ears.

Ears that “fly” or “rosebud” flip back and hang open rather than sitting in neat triangles framing the face.

This usually coincides with teething, around five months of age.

While not a health concern, incorrect ear set is something you may want to fix with massage or “taping”.

This needs to be done before the cartilage in your pup’s ear hardens, or the ears will remain this way permanently.

All dogs have occiputs as part of the structure of their heads.

Boxers are among the breeds that can have more defined “smart bumps”, so called because some claim they’re a measure of intelligence.

It is completely normal for Boxer pups to have domed heads, but some pups have more dramatic eggheads.

This is nothing to worry about and will disappear with adulthood, and probably long before.