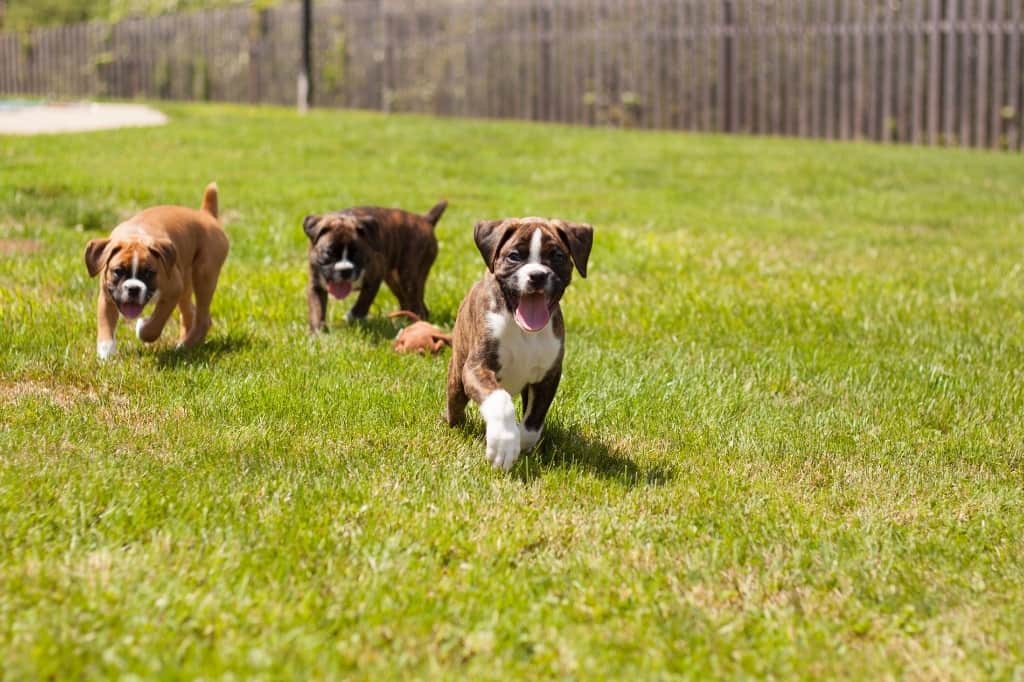 Knuckling is a developmental abnormality that can sometimes occur as a Boxer puppy grows.

In Boxer puppies knuckling can appear suddenly, almost overnight, and can look alarming due to the degree of deformity it causes.

It almost always completely resolves, often just as quickly as it first appeared, with dogs going on to have beautifully straight legs.

Proper nutrition, appropriate exercise and avoidance of hard, slippery surfaces all help to prevent, and correct, the condition.

What Is Knuckling In Puppies?

A knuckling Boxer puppy will bend his leg unnaturally at the wrist, almost as though the limb is made of elastic.

It refers to the hyperflexion of the carpal (wrist) joint.

The condition involves the muscles, ligaments, tendons and bones and a disturbance of the relationship between them.

There is often a tautness of the tendons of the foreleg muscle.

This can produce a dramatic deformity, particularly when the pup is weight bearing.

Knuckling may affect one or both forelegs.

The front of the leg will curve forward and the paw fold under, so that the pup seems to almost stand on his tip toes.

During knuckling, a Boxer puppy’s front legs may look to be:

As it worsens over several days, the leg may begin to bend out to the side as well.

These puppies will usually appear utterly untroubled by their condition, showing no sign of pain, lameness or reluctance to move.

Some may stumble when walking or seem weak in the affected limb.

In very severe cases, the knuckling may progress to such an extent that the pup is unable to support his weight and ends up standing on his wrists with the paws bent completely backward.

The earlier it occurs, the less serious it tends to be and the more likely it is to naturally resolve without intervention.

The first sign of knuckling can be a twisting of the toes followed by a lumpiness around the wrist.

Any dog can be affected, but this problem is most commonly seen in large and giant breeds.

What Causes Knuckling In Boxer Puppies?

Both diet and environment are thought to play a role.

Various inter-related factors have been implicated, including:

Knuckling may arise after a change in a Boxer puppy’s diet.

This might be when a puppy is rescued from a situation where he was malnourished.

Or it could be when a puppy leaves the breeder and arrives in his new home, as was the case for the brindle Boxer pup pictured above.

This change can be from poor nutrition to good quality nutrition.

But it can also be from adequate nutrition to an oversupply of nutrition, in the form of too much food or too much of certain nutrients.

Or the diet may contain excess, deficiency or incomplete bioavailability of:

All these nutritional scenarios can trigger sudden, rapid or uneven growth.

Because of the imbalances, synthetic vitamins and minerals and other shortcomings of commercially-manufactured, highly-processed dog food like kibble, it is always best to raise a Boxer puppy on a fresh, natural canine diet based on raw meaty bones, meat and offal.

It is healthiest for puppies to grow as slowly as possible — particularly large and giant breeds.

For this reason, it’s advisable to err on the side of slightly underfeeding a growing pup, rather than overfeeding as happens in many homes.

As Dr Ian Billinghurst describes in his book Give Your Dog A Bone, you want to slightly hold back the growth of a pup, by feeding less rather than more.

This is how puppies grow in nature, where there is rarely an overabundance of food.

Be careful not to free feed or overfeed a Boxer puppy.

How To Fix Knuckling In A Boxer Puppy

Knuckling is generally a self limiting condition, meaning it will usually self correct, with very little or no intervention.

Many owners of knuckling Boxer puppies report a phase of knuckling followed by spontaneous resolution of the problem and normal growth thereafter.

However, knuckling should not occur if all is perfectly well, and should be taken as a sign either the pup’s food or environment, or possibly both, need to be adjusted.

A Boxer puppy affected by knuckling should be immediately removed from hard or slippery floors like:

All Boxer puppies, and particularly ones showing signs of knuckling, should be kept on soft and appropriately textured surfaces with good grip, such as:

A knuckling Boxer puppy should not be:

In other words, a knuckling puppy shouldn’t be excessively exercised.

But nor should he be completely restricted in his movement by crating or penning in a very small area.

He should be allowed to move around freely on appropriate surfaces.

Rest is important but so is the ability to move his body — in fact, walking around on soft, textured surfaces is what develops proper muscle tone, essential to healing the issue.

Other things that can be helpful include:

Typically, knuckling will resolve quickly, in as little as a couple of days or as long as a month or two.

The Boxer puppy featured in the three-way photograph above was perfect at 8 weeks old when he came home from the breeder, showed the first signs of knuckling 5 days later, worsened for 2 days with both legs affected and then began to improve, appearing virtually healed 5 days after onset.

This pup had been raised outside, on grass but came to a home where he spent a lot of time on tiles and concrete.

The owner noticed he was slipping a lot on those surfaces.

Once the knuckling was identified, exercise mats were used to cushion the ground and playtime was only allowed on carpeted areas or grass.

If the problem is more serious, sometimes vets will resort to:

While knuckling usually corrects itself, it is possible to end up with permanent deformity as an adult, particularly if the knuckling is due to improper feeding that goes on for too long, uncorrected.

Knuckling Over In An Adult Boxer

Knuckling in puppies is usually a phase that quickly corrects.

If an adult Boxer starts knuckling or dragging his back paws, this is a different issue with different causes.

In an older Boxer this symptom can indicate a genetic disease of the spinal cord called degenerative myelopathy, or DM.

Other signs of this condition, which gets progressively worse, include:

Though it can look frightening, knuckling in Boxer puppies has a good prognosis and most puppies quickly recover without treatment.

The causes are not well understood but the most likely contributors are poor nutrition and time spent on hard or slippery floors.

Either of these situations, or a combination of the two, can give rise to poor muscle tone in the legs or uneven growth of bones compared to ligaments.

To avoid or correct the condition, Boxer puppies should be fed a fresh, natural canine diet based around raw meaty bones.

They should be raised on soft surfaces with good grip, not tiles or floorboards.

Are Boxers And Bulldogs Related?