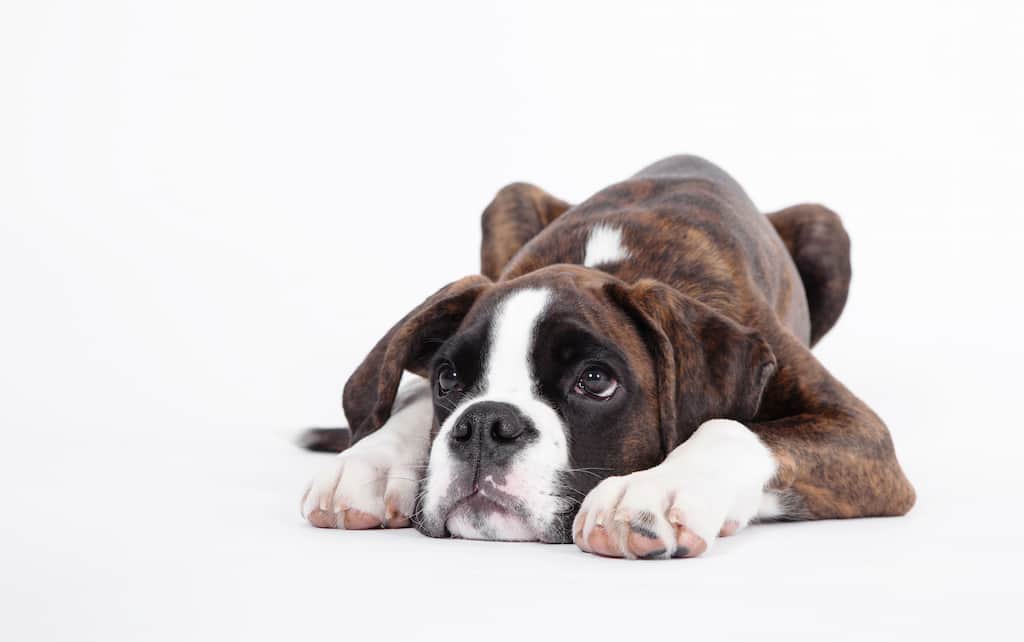 As many as one in five Boxers are affected by the birth defect known as cryptorchidism, which means one or both testicles fail to descend.

If a retained testicle is allowed to remain in a Boxer puppy’s abdomen, there are two main risks: a higher chance of testicular cancer and the potential for the spermatic cord to twist, cutting off blood supply.

Early neutering (or preferably, surgical removal of the retained testis while keeping the normal one) prevents these complications and is normally recommended when a Boxer’s testicles haven’t dropped by six months.

Cryptorchidism, meaning “hidden testicle” in Greek, refers to the failure of one or both testes to descend into the scrotum.

A missing testicle may be retained either in the:

If the retained testicle can be felt, it usually means it’s in the inguinal canal or subcutaneous region.

If not, it’s probably deeper in the abdomen.

A cryptorchid Boxer usually has one normal testicle — “unilateral” cryptorchidism accounts for 75% of cases.

For some reason, the right testicle is twice as likely as the left to be retained.

How Serious Is An Undescended Testicle In A Puppy?

A retained testicle is considered a minor and easily fixable problem.

It’s the complications that can be dangerous and even fatal.

Problems usually arise because of a lack of owner awareness.

The risk of testicular cancer is about ten times higher in dogs with an undescended testicle.

The thinking is that the increased temperature inside the abdomen, compared to in the scrotum, makes cancerous changes in testicular tissue more likely.

Dogs with retained testicles have higher rates of seminomas and Sertoli cell tumors.

To keep that in perspective, according to a 2007 Rutgers University paper, the risk of testicular cancer in dogs is less than one per cent.

So, a ten-fold increase in the risk of testicular cancer still means the risk is low — about 10%.

Testicular cancer is also a very treatable condition, with a high cure rate.

An undescented testicle is at risk of spermatic cord torsion, where the cord of the retained testis twists or wraps itself around other organs, which can be life threatening.

Is It Necessary To Remove An Undescended Testicle?

Removing an undescended testicle is recommended, in order to prevent testicular cancer and spermatic cord torsion.

When Should An Undescended Testicle Be Corrected?

Generally, if a Boxer puppy’s testicles aren’t both there by eight to ten weeks of age, he is a cryptorchid.

How long should you give it before intervening?

There is still a chance a Boxer’s undescended testicle might drop, as long as the inguinal ring (the exit hole from the abdomen to the scrotum) is open.

This nexus closes at about six months of age.

Beyond six months, the chances of the condition self-correcting are marginal and the risk of complications begins to increase.

Testicular cancer has developed in cryptorchid dogs as young as two years of age.

Puppies with retained testicles usually show no outward symptoms other than the fact that one or both testes cannot be felt in the scrotum.

The condition is rarely painful and pups typically appear otherwise normal — unless there is a complication.

The onset of sudden and severe abdominal pain usually means the spermatic cord of the retained testis has become twisted, cutting off blood supply.

More frequently, a retained testicle will become cancerous, the precise symptoms depending on the type of cancer.

If the testis develops tumors, the dog may show signs of hormonal changes, such as displaying “feminine behavior” or being harassed by male dogs as though he were female.

This is because testicular tumors tend to produce female hormones.

Note, there have been cases where disreputable rescue organizations have not actually removed the retained testicles of cryptorchid dogs before rehoming them.

The new owners had no way to tell that their dogs were not in fact neutered, but harboring hidden testicles.

The first indication was when symptoms of testicular cancer appeared.

How Common Is Cryptorchidism In Boxers?

Cryptorchidism is one of the most common congenital defects of the mammalian reproductive system.

It affects about one to 10 per cent of all dogs (and one to five per cent of human males).

The incidence is, unfortunately, higher in Boxers.

Research — albeit 20 years old — suggests 20 per cent of Boxers have a testicle that fails to drop.

Cryptorchidism can happen to almost any breed, but it’s most common in toy and miniature dogs.

Chihuahuas have the highest breed disposition to cryptorchidism with 30% having a retained testicle.

Other affected breeds include:

Purebred dogs are more at risk than crosses.

Cryptorchidism can also occur in cats.

Vets don’t know what causes testicles to remain in the abdomen.

It may be a short spermatic cord that doesn’t allow the testes to migrate far enough to reach the scrotum, or the testis might become tucked up in other abdominal tissues.

In either case, the prevailing view is that it’s a genetic flaw, because the condition appears to run in families.

Cryptorchidism is thought to be passed on as a sex-limited chromosomal recessive trait.

But it could also be due to a mishap during pregnancy — some kind of adverse condition or environmental factor that impacted the pup in utero and affected his development.

In this case, the defect would be considered more a a congenital malformation that might affect only one pup in a litter.

It is not regarded as a preventable condition, but — given it’s likely to be inherited — cryptorchid dogs should never be bred.

At What Age Do Testicles Descend In Boxer Puppies?

At birth, a puppy’s testicles are still inside the abdomen but slowly migrate into the scrotum, which provides a cooler environment for sperm.

The testicles usually complete their descent to the scrotal position by about eight weeks of age.

In other words, a Boxer puppy should have both testicles descended when he first comes home or shortly after.

Descent after four months is rare and after six months, unlikely.

Diagnosis Of Cryptorchidism In Boxers

Generally a physical exam at six months of age is all that’s required to establish that a Boxer is cryptorchid.

Your vet will palpate your pup’s groin and abdomen.

An ultrasound is the most reliable diagnostic tool for pinpointing the location of a retained testicle.

(An x-ray is unlikely to be successful when the testis is in the abdomen.)

However, scans are not often done before proceeding with surgery.

Treatment For Undescended Testicle In Boxers

Surgical removal is regarded as the only treatment for cryptorchidism.

The usual recommendation is to neuter a Boxer pup with an undescended testicle ASAP after six months.

There may be good reason not to completely neuter a cryptorchid Boxer.

But that doesn’t mean the normal one has to go.

Hormones produced by the testes play an important role in a Boxer’s growth and development and have a protective effect on overall health.

Neutering is associated with an increased incidence of many diseases including:

Incidentally, retained testicles continue to produce testosterone (though usually not sperm), so your Boxer is probably receiving the full complement of sex hormones from both testes, until his removal surgery around six months.

How Invasive Is the Operation To Remove A Retained Testicle?

The surgery to extract an undescended testicle is relatively straightforward.

But it can be unpredictable.

How invasive the surgery is depends on how deep in the abdomen the undescended testis is lodged — it can be anywhere from the groin to the kidney (which is where the testes originally develop).

Most general vets are capable of the procedure.

They charge more for complicated retrievals.

Can’t Surgery Just Move The Retained Testis Into The Scrotum?

Surgical placement of the retained testicle into the scrotum (orchipexy) is possible but frowned upon, mostly because it leaves open the prospect that the dog will breed, passing on the genetic fault.

It also allows a dog to be shown as though he is a shining example of the breed, when he actually had a genetic defect that’s been concealed by surgery.

Some owners have even been known to ask vets to insert prosthetic testicles into their show prospects that have been struck down with cryptorchidism.

Moving a retained testicle into the scrotum surgically usually involves opening the inguinal ring, which can come with an increased risk of inguinal hernias.

Is There Anything I Can Do To Make My Boxer Puppy’s Testicle Drop?

Some suggest that undescended testicles which can be felt beneath the skin can sometimes be “massaged” into place.

There’s also anecdotal evidence that human hormones given to dogs less than four months old can prompt testes to descend.

Vets don’t ascribe any credence to these accounts and say anyone who has success with any kind of treatment (other than surgery) for retained testicles probably just had a dog that was always going to descend, just late.

Should I Buy A Boxer Puppy With One Testicle?

Given cryptorchidism is most likely to be a heritable defect, it may raise questions about the dog’s breeding.

One reason to pass on a cryptorchid Boxer puppy would be if the occurrence of the fault is indicative of careless breeding practices.

If this is the case, the undescended testicle may be the least of the dog’s problems.

And, in these circumstances, you would want to avoid not just the cryptorchid pup, but his littermates — and probably other dogs bred by the same person.

Does the breeder screen for all the other heritable health problems seen in Boxers like heart problems and degenerative myelopathy?

Here are 24 essential questions to ask a Boxer breeder in order to assess their quality.

Prognosis For Boxers With Cryptorchidism

The outlook for a cryptorchid Boxer puppy is bright, providing the corrective surgery is done before complications develop.

Boxers are among the breeds most commonly affected by retained testicles.

Though the condition itself usually causes no symptoms, complications can be serious including torsion of the spermatic cord and a 10 per cent chance of testicular cancer (compared to one per cent risk in normal, intact dogs).

Surgical removal of the undescended testicle is the course of action to avoid both the risks to the individual dog and to stop him passing on the genetic defect if he breeds.

However, a full neuter is not necessary and there are health benefits to keeping a normal testicle.