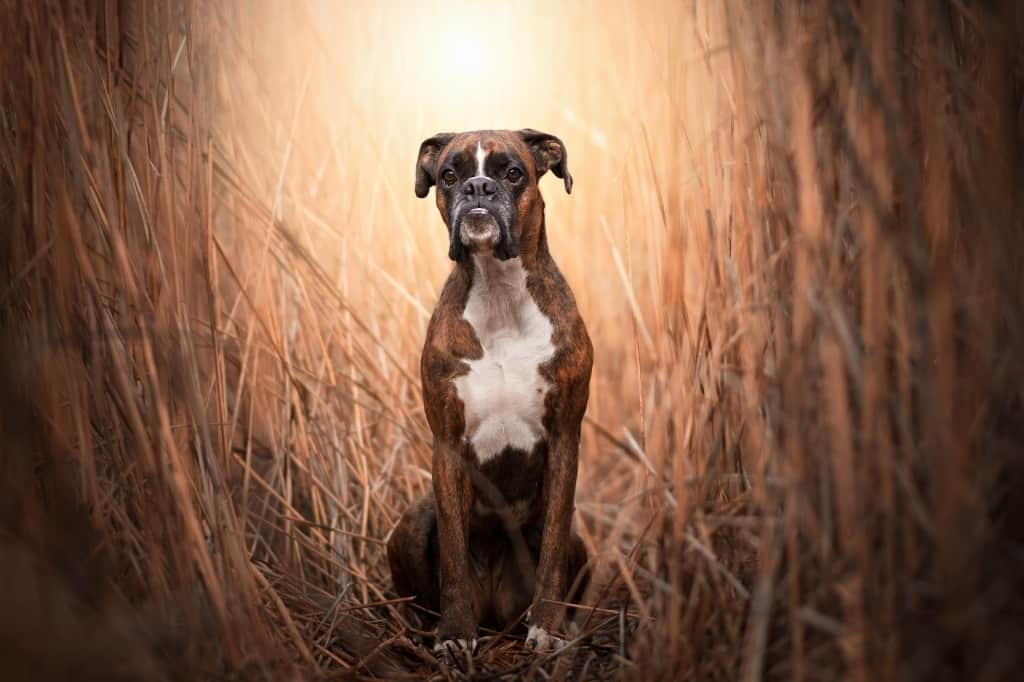 Many Boxer owners are under the impression the breed just has a “sensitive stomach”.

Some Boxers are even diagnosed with serious digestive disorders like “Boxer colitis” or inflammatory bowel disease (IBD).

However, these dogs are invariably kibble-fed.

Digestive problems in Boxers typically resolve with the feeding of a fresh, natural diet.

Until you provide your Boxer with a raw meaty bone-based diet, you don’t know whether he has a genuine gut problem or is just suffering the effects of ingesting a steady diet of highly processed food.

Signs of Digestive Problems In Boxers

Digestive issues in Boxers may start off as nothing more than:

Sometimes symptoms escalate to the point where vets are involved.

Often the initial veterinary response to unexplained digestive upset is to administer wormers or test for parasites with a fecal sample.

If the dog is clear of parasites, the usual trajectory is to regard it as a gut “infection” and dispense antibiotics, often metronidazole (flagyl).

When the problem persists, a dog may end up being diagnosed with a serious digestive disorder such as:

Colitis means inflammation of the colon, or large intestine.

Since the first case was identified in 1965, the causes of Boxer colitis have been researched and debated.

It used to be considered an idiopathic (spontaneously arising, of unknown cause), immune-mediated disease.

It’s historically been difficult to treat and had a very poor prognosis with high mortality rates.

The current theory is that it’s infectious in origin, after Escherichia coli bacteria were discovered in the lining of the colons of affected dogs.

Standard treatment is now the antibiotic Enrofloxacin, a broad-spectrum, heavy duty antibiotic from the fluoroquinolone class that itself can cause gastrointestinal disturbance like vomiting and diarrhea.

Its other potential side effects include tendon rupture, cartilage damage, depression and seizures.

Sometimes it’s given for one to two months and again whenever there’s a relapse.

Other times, it’s administered for the rest of a dog’s life.

Acid reflux, also known as gastroesophageal reflux disease, is a condition affecting the upper gastrointestinal tract, with the following symptoms:

Attacks can last a few minutes, a few hours, or non-stop for several days.

Acid reflux involves significant discomfort due to stomach acid flowing back into the esophagus.

The exact cause is not well understood and it is variously attributed to:

However some holistic practitioners have had success with low-fat raw diets and even chiropractic adjustments of the spine.

For more detailed information on acid reflux and how to heal it, see our article Why Do Boxers Lick The Air? It Could Be Acid Reflux

Inflammation of the pancreas is an increasingly common diagnosis amongst pet dogs — again with very little comprehension of the mechanism at play.

The pancreas is the organ that releases the enzymes that facilitate digestion.

These enzymes are supposed to activate only once they reach the small intestine but in pancreatitis, they are said to activate while still within the pancreas, in effect digesting the organ itself.

This is very painful.

Pancreatitis can be triggered by ingestion of a very high fat meal, including when dogs raid the trash or are fed fatty offcuts from Thanksgiving leftovers.

A diagnosis will usually follow blood tests to measure the pancreatic enzymes lipase and amylase … and possibly fine need aspiration of the pancreas.

A diagnosis of food allergies is, however, a lucrative proposition, leading as it usually does to a battery of “allergy” tests on hair, saliva and blood samples.

Owners are led on a wild goose chase that usually ends in elimination diets which inevitably lead to a recommendation to feed only “prescription” dog food or “novel” proteins.

Chicken is often blamed for food allergies, though it’s far more likely toxic residues from antibiotics, hormones and the multiple vaccines applied to factory-farmed chooks during their short life are the real source of the irritation.

Owners frequently go on to find chicken and other proteins blacklisted by allergy tests cause no problem when fed raw instead of cooked, in kibble.

What Causes Digestive Issues In Boxers?

As far as conventional veterinary medicine is concerned, the underlying cause of the various digestive disturbances experienced by Boxers is, at best, hazy.

“Autoimmune” is the oft-used catch-all.

More holistic perspectives consider a range of factors, including:

Food For Boxers And Their “Sensitive” Stomachs

What goes in your Boxer’s bowl is a major determinant of his overall health, including his digestive health.

Every day, with every bite, you are either setting your dog up for health or disease.

Inappropriate food is a primary cause of digestive problems.

If you are feeding any kind of kibble or other commercially-manufactured dog food, it’s your number one culprit.

Don’t accept a diagnosis of a GI disorder until you have made sure you’re feeding a fresh, natural diet.

Think kibble is just fine for your Boxer?

Learn what’s in dry dog food and how it’s made and you will never give it to your Boxer again.

See also: How To Raw Feed A Boxer & Why Do Boxer Dogs Eat Grass?

It’s no coincidence that the onset of your dog’s gastrointestinal upset may have coincided with a recent course of medication, or followed a round of vaccines.

Several commonly prescribed veterinary drugs are known to inflict a lot of damage to the gut.

Among a raft of other serious side effects, antibiotics like Metronidazole (Flagyl) disrupt the gut biome, sometimes so severely that it can be difficult to restore.

This is why vets recommend probiotics with or after a course of antibiotics.

Over-prescribed steroids like prednisone are also exceedingly rough on the GI tract.

This is why “gut protectants” like Omeprazole are routinely prescribed alongside prednisone.

Chemical wormers and flea and tick treatments are internal pesticides.

They work because they are poisonous.

To small critters like parasites and insects, they are instantly deadly.

Our dogs, as larger creatures, don’t usually keel over immediately — although more than 20 000 owners in this Facebook group have lost dogs including Boxers, or had them suffered serious reactions to these products.

Even if your Boxer has taken these chemicals without ill effects so far, repeated doses can contribute to an accumulation of toxic residues in your dog’s tissues.

If the build-up exceeds the ability of your dog’s body to filter and excrete those toxins via the liver, lymphatics, gut and kidneys … that’s when you see an outbreak of symptoms.

These symptoms can manifest as everything from gut disturbances to skin irritation like hives or other “allergic” reactions.

Fat overconsumption is why you can be feeding a raw diet but still seeing your Boxer experience digestive upset.

It depends how you are feeding raw.

Are you choosing lean cuts of meat and removing skin and all visible fat?

Or are you feeding mince or pre-made commercial grinds?

For a while, a young dog’s metabolism can cope with a high-fat diet.

But eventually, there will be consequences.

Signs of fat overconsumption in dogs include:

Why does fat content matter in a dog’s diet?

A certain amount of fat is necessary, and healthy.

Pet dogs, on the other hand, are fed the products of human agriculture, which are deliberately fattened for slaughter.

Commercial dog foods contain far more fat than your dog should be consuming.

Deceptive labelling can make this hard to detect.

Do this and you will find an apparently low fat food reveals itself to be exceptionally high fat.

For instance a dog food advertised as 14% fat by weight suddenly becomes 62% fat by calorie.

To put that in context, prominent integrative vet Dr Karen Becker defines food with less than 17% of calories from fat as low fat.

She says more than 31 per cent of calories from fat is high fat dog food.

Aside from the fact that high fat foods stray from the natural canine diet, there is another reason t avoid feeding too much fat.

So, when your dog eats fatty beef, he is consuming any toxic residues that cow had been exposed to through vaccines, worming, pesticides on grass etc.

(It’s a similar mechanism to how heavy metal pollution in the ocean is consumed and stored by fish, and passed up the food chain where it accumulates in large, long-lived fish like tuna.

This is why it’s recommended dogs and humans don’t eat tuna every day, because of it’s mercury content.)

How To Fix Stomach Problems In Boxers

Understanding the contributors to gut damage in Boxers, the solution becomes clearer.

Avoid or heal a Boxer’s gastrointestinal issues by:

Science is beginning to cotton on to the myriad benefits of fasting.

On the most basic level, when a dog (or human) fasts, energy that would otherwise be needed for the labor-intensive process of digesting fat and protein can be directed instead to cellular repair and regeneration in a process known as autophagy.

Research has shown fasting can:

Nature has known this since the beginning of time.

Wolves naturally fast on a regular basis, eating according to the ecological cycles of boom and bust.

Only pet dogs eat every day.

Wolves and other wild dogs eat more like once every three to seven days.

They go even longer between meat meals in times of scarcity, able to sustain themselves on secondary foods like berries.

Incorporating fast days into your dog’s routine is a simple, cost-effective, side effect free way to support optimal health.

It is even more beneficial if your dog is healing gut issues.

How Not To Treat Boxer Stomach Problems

There’s no shortage of products marketed at Boxer dog stomach issues, including:

Some of these remedies might mask symptoms but do nothing to address the cause of the problem.

Others are downright harmful, unleashing a cascade of new side effects.

All are red herrings.

The vast majority of gut problems in Boxers are readily resolvable if the owner corrects misfeeding and avoids having their dog ingest other toxic inputs like drugs and chemical wormers.

Bloat or Gastric Dilatation-Volvulus (GDV) is a sudden-onset condition that is a genuine veterinary emergency.

The stomach fills with gas and fluids and sometimes twists on itself.

Bloat and gastric torsion can be deadly without urgent intervention.

As a deep-chested breed, Boxers are at elevated risk of bloat.

See also: How To Prevent Bloat In Boxers

Before you conclude your Boxer has gut problems, look honestly at what you are putting into his body on a daily basis.

If he’s eating kibble or any other highly processed dog food — you’ve probably found the source of your dog’s problems.

Should Any Dog Food Formula EVER Have Corn Starch as the Main Ingredient? Dr Karen Becker, Mercola Healthy Pets, August 12, 2012

Boxer Dog Nuisance Barking: How To Stop It