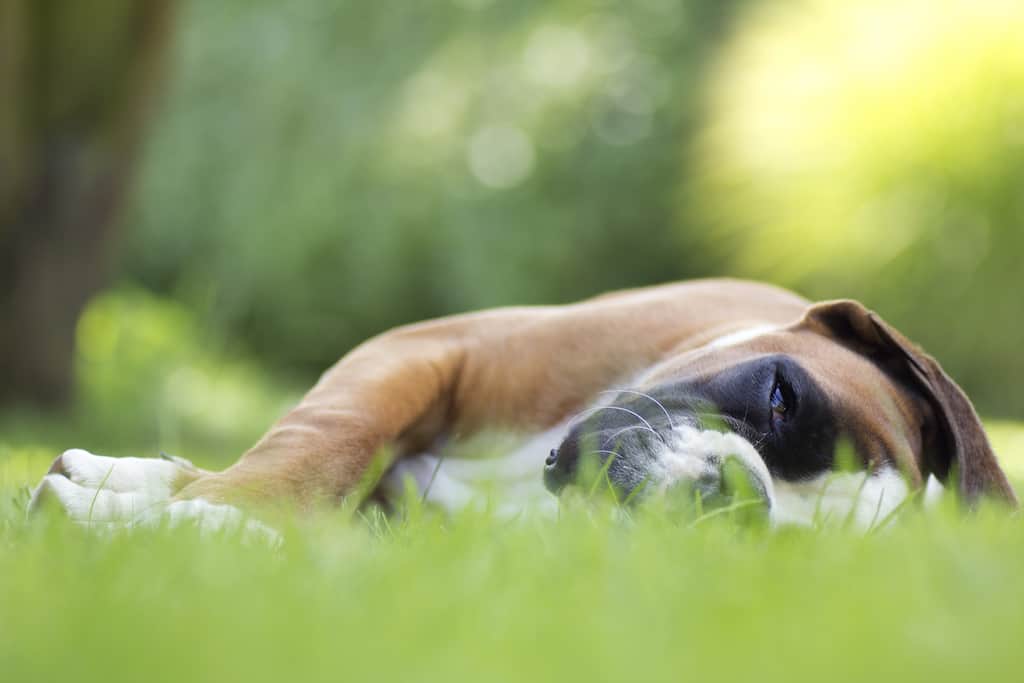 Boxers get themselves stung by bees frequently enough that owners have a term of wry endearment for the insects: spicy sky raisins.

Bee stings in Boxer dogs can range in severity from minor irritation at the bite site to more severe reactions including hives and facial swelling and, at worst, collapse due to an acute and potentially fatal allergic reaction known as anaphylaxis.

Reactions can happen within seconds or minutes of being stung.

I am not a vet. This article is intended for general informational and educational purposes. I encourage readers to view my full disclaimer. Boxer Dog Diaries is reader powered. I may receive a small commission, at no extra cost to you, if you make a purchase via links I share. Thank you for your support.

How Serious Is It If Your Boxer Gets Stung By A Bee?

Some Boxers seem to get stung by bees on a regular basis with no more grave consequences than a swollen face and a dose of Benadryl (although this is not a drug you want to use lightly, as explained shortly).

Most of the time bee stings cause mild swelling at the bite site and a little pain that goes away on its own.

Sometimes, a Boxer will develop a swollen face, itchiness and hives all over the body in response to a bee sting.

On the extreme end of the scale, anaphylactic reactions can cause a dog to collapse and die on the spot or go into shock, necessitating urgent treatment.

What kind of reaction your Boxer has to a bee sting depends largely on whether or not he happens to be allergic to the venom, which you won’t know if this is the first time he’s been stung.

Aside from a pre-existing allergy to bee venom, factors that may make a severe reaction more likely include:

Are Boxer Dogs Allergic To Bees?

Bee allergy in dogs is said to be rare.

Boxer dogs are not, as a breed, allergic to bee venom.

Individual dogs, just like humans, vary in their sensitivity.

A large, localized swelling in response to a bee sting does not, on its own, mean your Boxer is allergic to bees.

Can You Test A Boxer For Allergy To Bees?

Testing for an allergy to bee venom is available but dogs are not routinely screened because:

Instead, most vets advise going on a dog’s history.

If a Boxer has previously had a severe reaction to a bee sting, you know he’s allergic.

In this case, your vet can prescribe extra measures like an Epipen devices or perhaps a “bee vaccine” (more below).

Note that just because your Boxer has been stung without reacting in the past, this does not mean the good luck will continue.

How To Treat Bee Sting In Boxers

Most bee stings are a minor nuisance that require no treatment.

However, if you know your Boxer gets hives from bee stings, the standard veterinary advice is to:

If hives have already erupted, the recommendation is to:

For Boxers known to go into shock due to a bee venom allergy, extra steps are warranted:

Should I Take My Boxer To The Vet For A Bee Sting?

You should take your beestung Boxer to the vet immediately if you notice:

According to the Icahn School of Medicine at Mount Sinai’s advice on bee stings in humans, symptoms like hives, swelling of throat, lips, tongue and mouth and difficulty breathing are not due to venom, but signs of a systemic allergic reaction.

In other words, your Boxer doesn’t have to swallow a bee or be bitten on the face for his face and neck to swell and breathing difficulties to develop.

While hives and facial swelling do not necessarily indicate an anaphylactic reaction, they can lead to it.

At the very least, call your vet for advice.

If you’ve administered Benadryl and it hasn’t had any effect, you may need veterinary intervention to stop the inflammatory response escalating.

Can A Boxer Dog Die From A Bee Sting?

If a Boxer is severely allergic to bees, or if he doesn’t receive prompt enough treatment, a bee sting can be fatal.

Boxers’ brachycephalic (short-nosed) head structures can make them more vulnerable to breathing difficulties that can arise as a result of bee sting.

If your Boxer has a history of local reactions to bee stings that have become increasingly severe each time he’s been stung, there is a higher likelihood that subsequent stings will trigger a whole body reaction i.e. a serious allergic reaction.

How Quickly Will A Boxer Dog React To A Bee Sting?

Reactions usually occur immediately, within 20 minutes, but can be delayed by hours.

Prevent more stings by removing your Boxer from the area where he encountered the bee.

Further stings close on the heels of an existing bee sting are likely to trigger a faster and more serious reaction.

Signs And Symptoms Of Bee Sting In A Boxer Dog

If your Boxer is going to react to a bee sting, it will usually happen either straight away or within a few hours.

The classic sign of bee sting in a Boxer is a swollen muzzle.

Interestingly, in the case of bee stings in children, the medical advice to parents is that the facial swelling can look very bad without being serious.

These symptoms can quickly progress to anaphylactic shock, culminating in collapse and, without prompt intervention, death.

If your Boxer hasn’t been outside, or near any bees, but has broken out in raised welts all over his body, he made have had exposure to some other kind of toxin.

Scented plugins, perfume and hairspray are among the common household chemicals that have caused hives in dogs.

Why Do Boxers Get Hives?

Boxers are pretty tough and dogs, in general, conceal pain as an evolutionary adaptation against showing weakness.

But bee stings can hurt!

How To Tell Your Boxer Has Been Stung By A Bee

Behavioral indications your Boxer may have been stung include:

There may well be evidence nearby e.g. bee on ground, wasp nest, insects buzzing.

Why Bee Stings Cause Hives, Swelling And More

When a Boxer has an allergic reaction to bee venom, it causes a release of natural chemicals called histamines in the body.

Anti-histamines work by blocking the H-1 receptors, interrupting the chain reaction that leads to the symptoms.

Benadryl For Boxer Dogs Stung By A Bee

Benadryl is the brand name for the drug diphenhydramine hydrochloride, an over-the-counter anti-histamine designed for humans.

There is a tendency, amongst both owners and vets, to regard this as a harmless drug.

However, like any drug, Benadryl comes with its own risks.

Many owners have given their Boxers Benadryl in response to a bee sting, without being aware that Benadryl itself can cause an allergic reaction in dogs.

If you must use it on your Boxer, do so cautiously.

Check the label, but usually each Benadryl tablet contains 25mg

The maximum Benadryl dose for dogs is 1mg/lb given two to three times a day about eight to 12 hours apart.

The effect usually wears off in 24 hours, but in dogs with liver or kidney disease, the effects last longer.

Some Boxers are more sensitive to this drug than others, so start small and slowly increase the dosage.

Benadryl is said to have a narrow margin of safety in dogs.

It is possible to overdose a Boxer on Benadryl.

Signs your Boxer may have received too much Benadryl include:

Consult a vet before giving Benadryl if your Boxer has any other health conditions.

Boxers that should not receive Benadryl include those with:

Common side effects of Benadryl in Boxer dogs include:

Benadryl can also cause:

If using Benadryl, make sure:

Note: many owners report the swelling from a bee sting goes down on its own, without giving Benadryl.

Homeopathic Alternatives To Benadryl For Bee Sting In Boxers

More natural alternatives to Benadryl in the case of bee stings, or other insect bites, include homeopathic remedies.

The two remedies most often recommended for bee sting are:

Touching them as little as possible, place two or three pellets inside your Boxer’s lip to dissolve.

Give two or three doses in the first hour.

If there’s no improvement, try the other remedy.

How To Treat A Minor Bee Sting At Home

Venom immunotherapy, (VIT), known as a “bee vaccine”, is available for dogs that have previously suffered a life threatening allergic reaction to bee sting.

The treatment is aimed at desensitizing the body to the venom.

It’s said to have a very high success rate, with dogs either having a very localized reaction to subsequent stings, or no reaction at all.

How To Stop Your Boxer Dog Chasing Bees

It’s no surprise that the nose and mouth are the number one places dogs get stung, followed by the paws.

Do all you can to protect your Boxer from bee stings via good training and management of risk.

Wifi cameras are also a good way to notice if your Boxer goes down with something like bloat, a condition that can be deadly within hours without veterinary intervention.

Teaching your Boxer to avoid bees can be as simple as:

It’s a good idea as part of your Boxer’s socialization to teach him to disregard all insects, as he may not distinguish between bees and flies.

Other Insects That Can Sting Boxers

Bees are not the only insect that can inject venom into your Boxer.

Note that indoor hazards can be as much of a threat to your Boxer as bees in the garden, if not moreso.

Set up your kitchen and bathroom with self-closing pedal trash cans like the Amazon Basics Soft-Close, Smudge Resistant Trash Can with Foot Pedal so that it’s impossible for him to raid the trash and eat something he shouldn’t.

An air purifier like the Medify MA-40 Air Purifier with True HEPA Filter is well worth the investment to help minimize indoor air pollution especially VOCs (volatile organic compounds) which are odorless but toxic off-gasses emitted by many household items.

Bee stings can be responsible for severe reactions in some Boxer dogs.

In a majority cases, there may be nothing more than some pain and swelling at the bite site, which resolves on its own.

However, if your Boxer develops hives and facial swelling, Benadryl — or less toxic homeopathic remedies like Ledum and Apis — may help.

In the case of an anaphylactic reaction, there is no option but to get to a vet ASAP for life saving intervention.

Prevention is the key.

If your Boxer has experienced extreme reactions in the past, you may want to consider an EpiPen or, if exposure to bees cannot be avoided, a “bee vaccine”.

Becker, Karen, DVM, Equally Painful for You and Your Pet, This Seasonal Mishap Can Be Fatal, Mercola Healthy Pets, 2018

Henriques, Julia. Benadryl: Not As Safe For Dogs As You Think, Dogs Naturally Magazine, 2021