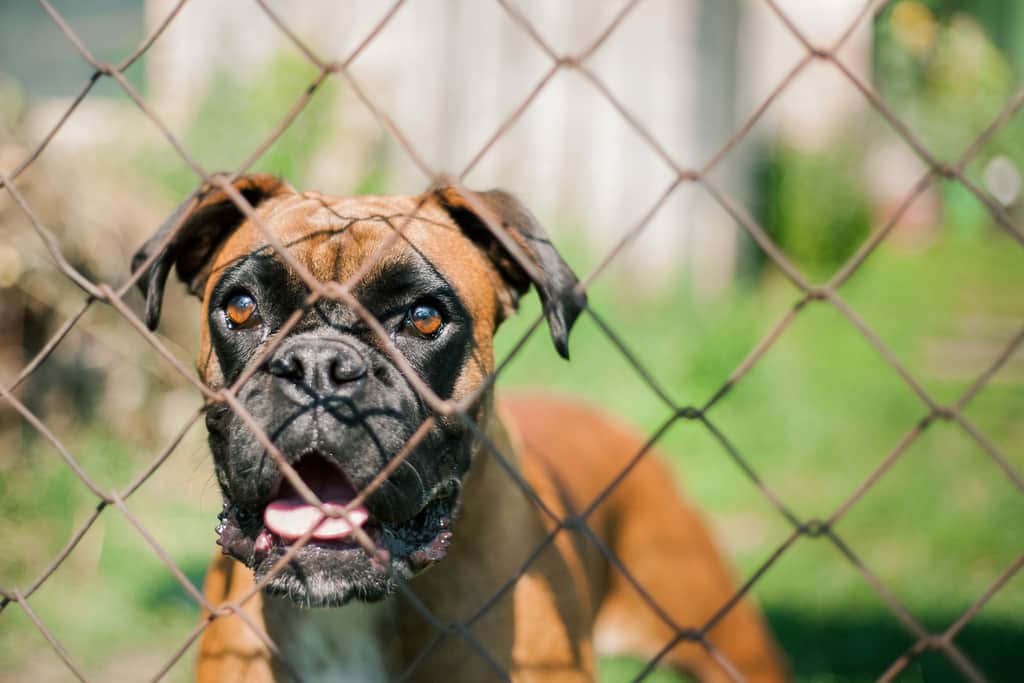 Boxers do best with a securely fenced yard.

While there are several alternatives to a traditional fence, by far the most effective way to keep your Boxer safely enclosed is to erect a regular, sturdy boundary fence.

Your Boxer needs a fence not only to keep him in and provide a private off-leash play area, but to keep other dogs out.

Depending where you live, a fence may also provide some protection from wild predators.

In addition, many breeders and rescue organizations won’t release dogs to homes without fenced yards.

What Kind Of Fence Is Best For A Boxer?

Try to build a fence that your dog can see through.

A strong chain-link fence (like the one pictured above) will allow him to watch the passing parade.

He’ll feel much more content, compared to the boxed-in feeling of a wooden paling type fence (like the one shown below).

Fence Height For A Boxer AKA Can A Boxer Jump A 4 Foot Fence?

A 4 foot fence will not contain a Boxer determined to escape.

Boxers are powerful jumpers and more than capable of clearing a 4 foot fence, and higher.

Fencing contractors generally recommend a 5 or 6 foot fence height for dogs like Labradors, and Boxers are decidedly more buoyant than Labs.

In truth, a motivated Boxer will be able to climb over even a 6 foot fence.

As this guy ably demonstrates:

And that’s no isolated case. This fence is reportedly 7 foot:

But will your Boxer jump your fence?

That depends on your individual Boxer, on how you train him and on whether you keep him properly exercised and mentally stimulated.

Putting up a fence is no substitute for teaching your dog what behaviors are expected of him and for walks and plenty of one on one time.

(Incidentally, Boxers enjoy digging. Going over the fence is not the only possibility.)

Teach your Boxer right from the start, give him better things to do than jump the fence and chances are he will never even turn his mind to the prospect.

A Boxer that’s already been on a morning run at the beach and has a raw meaty bone to look forward to this afternoon before another walk or play session before dinner will not be looking to leave the area for one second.

Home will be exactly where he wants to be.

He’ll be snoozing contently in the sun until bone o’clock.

Let your Boxer get lonely and bored, stuck for hours on end in the backyard, however lovely, and you may come home to an empty yard and a Boxer that’s been hit by a car.

Boxers are not outside dogs.

Nor are they dogs that can be happily left alone all day long.

Equally, Boxers will not fare well if crated for more than a few hours during the day.

Boxers are people dogs and crave human companionship and involvement in every aspect of their owners’ lives.

They need to be where their family is, not relegated to the backyard.

Invisible fences deliver an electric shock to your dog via a collar when he passes a designated point in the yard.

Installing an invisible fence is less work than constructed an actual fence, but it does involve burying a wire in a trench underground.

These fences are also known as hidden fences or sometimes electronic or electric dog fences.

The shock is usually preceded by a warning beep.

The delivering of an electric stimulus to the dog is not without risks.

It should not be painful as long as the device is set correctly.

But Boxers are sensitive creatures and can suffer badly when punitive training methods are used.

What’s more, invisible fences do nothing to protect your Boxer from dogs and other threats entering the yard.

They can also create issues in that passers-by and their dogs don’t know your dog is restrained in any way because the fence is invisible.

It can be quite terrifying for both dog and owner to be rushed by a well-muscled Boxer in full flight, with no sign of stopping.

Dogs will still breach an invisible fence if frightened by a loud noise or thunderstorm, for instance — or if they see something they really want.

The dog then has the problem of how to return home without getting shocked.

Some invisible fences only shock the dog on the way out, but others will shock the dog regardless of the direction from which he crosses the boundary.

Even in a best case scenario, an invisible fence is not a set-and-forget arrangement.

It requires an investment of time in training — both for you, in learning how to properly set up the fence and for your dog in understanding what the electric shock means.

You can see not only how ineffective this electric fence is.

Note the agitation created by the electric shock, and the added incentive the aversive stimulus provided for the dog to go ahead and escape the enclosure.

Can you blame him?

There’s nothing kind about letting your Boxer continually escape and roam the neighborhood where he can be hit by a car, get stolen, be attacked by another dog or, if unneutered, randomly mate with other dogs.

But there is a humane way to go about keeping your dog contained.

If you live in rural areas where there are venomous snakes, it is worth considering a snake-proof fence.

You can layer snake-proof wire over an existing fence.

If there was ever a dog unsuited to life at the end of a chain, it’s the Boxer.

A fixed tether in lieu of a fence?

Just don’t do it.

You don’t even want to leave a collar on your Boxer when he’s at home.

Collars and tags can get snagged on things, including in between floor boards, in air conditioning vents and in the bars of a crate.

Your dog can end up strangling himself in an effort to escape.

Supervise a collared and leashed dog at all times.

Training A Boxer To Stay In An Unfenced Yard

One alternative to not fencing your yard is to never leave your Boxer outside alone .. and to teach him to stay within the property limits, under supervision.

While possible, this requires an incredible amount of know-how and dedication on the part of the owner.

As alert and active as Boxers are, they struggle not to pursue every sight, sound and smell.

This can be a recipe for disaster.

Particularly if other dogs or roads are nearby.

Getting hit by a car is a leading cause of death for dogs and Boxers can tend to have a total lack of road sense.

Do not put your Boxer in this position.

Use a long line while training your dog to respect the property boundaries.

Here the idea is the dog drags a 10m or so long leash on the ground behind him.

The line gives him freedom to make decisions while keeping him safe because you can step on the lead at any time to control his movement.

Remember that dogs, even well trained ones, can still make errors of judgment.

Even if your yard is fully fenced, a Boxer left outside alone is at risk of being stolen.

If your Boxer is visible to the public in the yard, the risk is magnified.

Always supervise your dog when he’s outside, particularly in the front yard.

Bug bites are another reason not to leave your dog outside unattended.

Boxers are prone to chasing bees and bee stings frequently lead to hives.

Hives can create a life threatening emergency, if the swelling obstructs the airway.

Mosquitoes transmit heart worm to dogs and so you’ll want to avoid your dog getting bitten.

(This is less of an issue in the colder months, when low temperatures interrupt the life cycle of the heart worm larvae.)

Apartment Living With A Boxer

Living without any backyard, let alone a fenced backyard, can be done with a Boxer but it takes a lot of commitment.

Boxers can do quite well in apartments as long as they’re out and about all the time with their owners.

Fenced off-leash areas become the holy grail for apartment-dwelling Boxer owners … and the beach is a godsend.

A traditional dog fence around your yard, or at least a sizeable portion of it, will make life with a Boxer much easier.

While it’s not essential if you’re willing to never leave your dog outside for a second unattended, you’ll be glad to have one.

Remember, roaming a fenced yard is not sufficient exercise for a Boxer.

They still need the adventure and the mental stimulation of walks and the chance to explore new places.