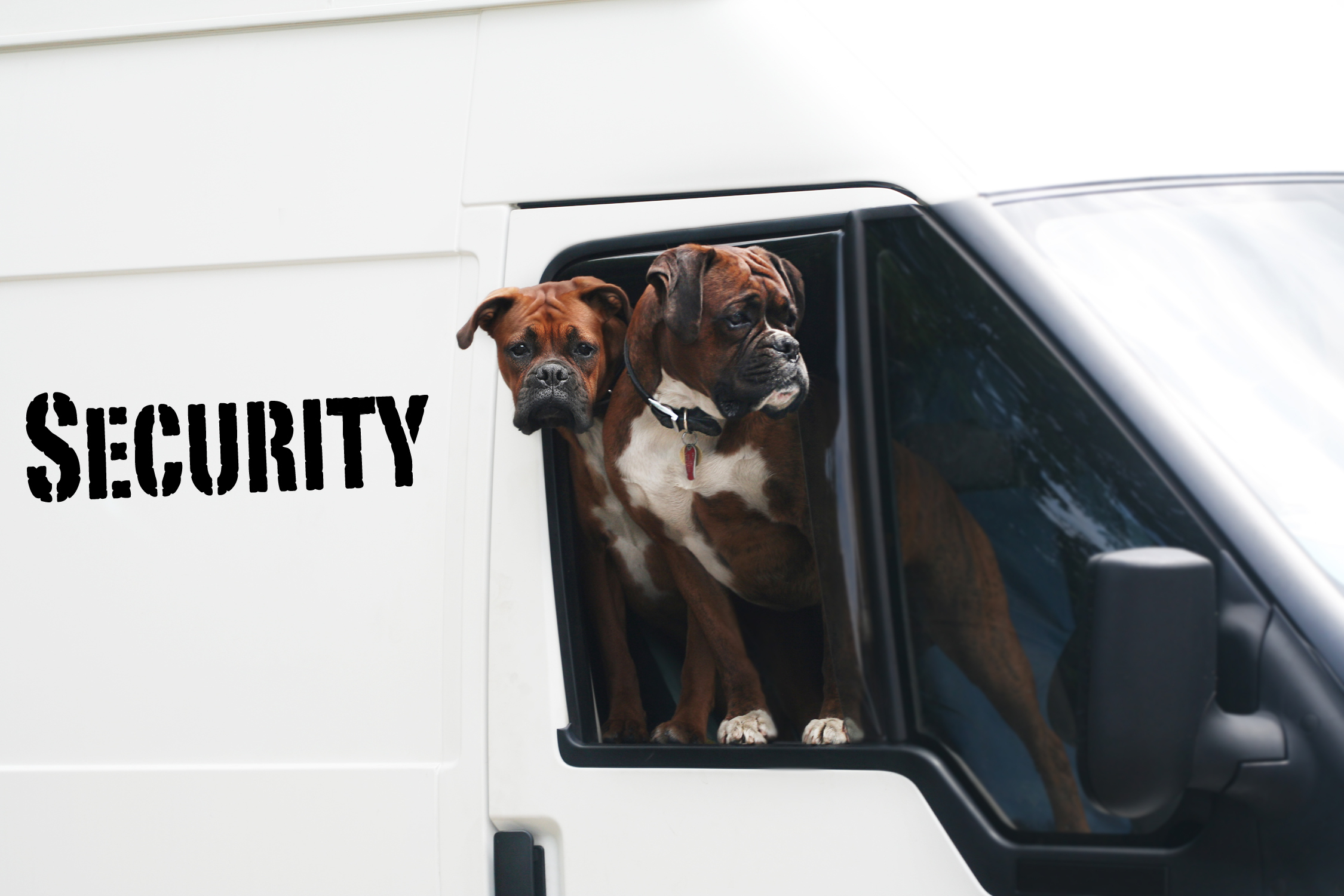 The idea that their goofy, fun loving boofhead could be a fearsome guard dog might make some Boxer owners guffaw, but the breed has historically been used for precisely this purpose.

In The Boxer, the definitive account of the breed published in 1939, John Wagner says, “As a defender of the person and the property of his master, the Boxer is famous.”

Boxers make natural watch dogs. They are observant to the point of nosy, confident and outgoing. When they bark it usually means something.

Boxer breeder and trainer Karla Spitzer describes Boxers as “gentle” guard dogs that “alert on sound and attack via a body slam rather than with jaws and teeth”.

Boxers were originally bred as hunting dogs, trained to catch and hold down large game like wild boar and bears. Not a job for a dog without some fight in him.

Boxers are known to be fearless and brave. They have served as police dogs and in the military. One of the most legendary original combat Boxers in WWI was named CH Roll von Vogelsberg. Roll is said to have been so skilled he could snatch live hand grenades out of mid air.

Boxers are classified by the American Kennel Club as a working breed. Throughout a long history, they have performed all the classic tasks of the domesticated dog, including herding (as cattle dogs) and guarding.

The Boxer was created by crossing a German mastiff-type dog, the now-extinct Bullenbeisser, with an English Bulldog. The Bullenbeisser was used for bull-baiting, among other things.

How To Train A Boxer Dog To Guard

Boxers can be trained to attack.

There are techniques to train guard dogs, and protection or “bite” work is a specific field of expertise for dogs and handlers. Encouraging guarding behavior is not something you want to deliberately do with a pet Boxer.

If you’re interested in seriously training your Boxer to guard or to bail up intruders, seek professional training for both of you. Otherwise you are likely to put both your dog and others at risk.

With a muscular physique and imposing stance, Boxers can be perceived as threatening by those unfamiliar with the breed, particularly when their ears are cropped and tails docked to make them look fierce.

Why do they crop Boxers’ ears?

Having a Boxer in the home will likely deter intruders on appearances alone.

But Boxers were also the first seeing-eye dogs, a role that speaks to their steady temperament and reliability. They are popular family dogs renowned for having a soft spot for children, with whom they are gentle and patient.

These are not descriptions typically associated with Boxers.

The Boxer’s John Wagner writes, “Although his strength and agility enable him to compete against any assailant, the Boxer is never a bully.”

Like any dog, Boxers can potentially become dangerous if mistreated or improperly managed.

As a highly active breed, both mentally and physically, Boxers can develop problem behaviors if not given proper outlets for their energy and without consistent, effective training.

According to the non-profit group DogsBite.org, those two attacks represented 4 per cent of all dog bite fatalities in the United States (there were 48 in total that year). This puts Boxers on a par with Australian Cattle Dogs and German Shepherds, which each killed two people.

Underlining the fact that any dog can be dangerous, 35 different breeds were involved in the remaining 24% of deadly maulings.

Breed-specific laws vary between US states. Most target Pit Bull Terriers and Rottweilers.

In only one state — Michigan — are Boxers named. In the city of Harper Woods they are listed among the breeds considered “suspect as vicious and potentially dangerous”. Dalmatians, Great Danes, Rhodesian Ridgebacks are also categorized this way in Harper Woods.

Boxers rate one other mention. They are among the breeds declared “dangerous” and banned from privatized housing on the US military base in Rota, Spain.

Boxers are not among the breeds most commonly blacklisted by insurers when granting policies to homeowners and renters.

It’s possible people who consider Boxers dangerous have them confused with other bully breeds that are more problematic, or even Pitbulls. Or they may have had a bad experience with a particular dog in the past.

Causes Of Aggression In Boxer Dogs

Dogs live in our homes. They sleep in our beds. But they are a different species with whom we don’t always communicate 100 per cent effectively. There is room for error in the relationship between dogs and humans. All canines can be unpredictable and even a gentle dog put in the wrong situation can conceivably turn momentarily vicious.

According to DogsBite.org’s analysis, an attack is much more likely if:

Many factors can predispose a Boxer to aggressive behavior:

1. Being An Intact Male

This is not an argument in favor of neutering, which is now known to increase the incidence of many diseases, as “the most followed vet in the world” Dr Karen Becker, acknowledges: “It’s unfortunately true that a growing body of research is pointing to early sterlization as the common denominator for development of several debilitating and life-threatening canine diseases.”

However, it’s important to be aware of the special challenges intact dogs present and the management they require. Intact dogs smell different to other dogs and can have supercharged instincts. They can exhibit different behaviors to neutered dogs, and they can elicit different — sometimes aggressive — reactions from other male dogs. Intact male Boxers should be carefully supervised around other dogs, particularly unfamiliar ones and males.

It is normal for dogs to feel ownership of their own turf and protectiveness of their owners. Sometimes a dog’s sense of his territory can extend beyond the house to the neighborhood.

Every dog, especially a dog with dominant tendencies, needs to know his place. He must understand his role is as a good follower dog, not pack leader. The pack leader is you, the owner. Once your dog knows you have things under control, he will relax. Be sure to be a good alpha with clear, consistent rules, gently but firmly enforced. If there’s a leadership vacuum, your dog will consider the top job available, and jostle to fill it.

Two dogs, especially of the same gender, can sometimes clash and fight. Some Boxer rescues refuse to place female Boxers in households that already have another female dog, for this reason.

A Boxer without enough exercise and mental stimulation will quickly become bored and a bored Boxer can get into quite a bit of trouble. Boxers are not the kind of dog you can happily leave in the backyard on their own all day long. Boxers want to be with their people. And they want to be occupied. Boxers with no constructive, acceptable way to release their pent-up energy, or Boxers that are lonesome, can become destructive in an effort to entertain themselves or soothe their anxiety.

Frustrated Boxers are much more prone to undesirable behaviors of all kinds. Make sure you’re meeting your dog’s needs so you set him to be a good dog.

Read more about how to fix Destructive Chewing In Boxer Dogs

An otherwise gentle Boxer may growl or snap if she’s sick or in hurt, particularly if a stranger like a vet is trying to examine a sore body part.

Some Boxers may not like their muzzles touched or instruments directed at their faces, or ears. Be aware of your dog’s sensitivities and read their cues so you can help navigate these situations with a minimum of stress for your dog and all involved.

If your Boxer is a rescue there may be experiences in his past that have made him fear certain situations or types of people. Be aware that a dog can be triggered unexpectedly. Tread gently until you’re fully familiar with your dog’s temperament, quirks and behavior in all situations.

8. Changes To The Household

Moving house, bringing home a new puppy or kitten or human baby. Divorce. Long absences of one owner. Any changes in routine. All these things can be stressful for a Boxer. Make changes slowly. Maintain a routine that’s as predictable as possible. Make sure your dog has a quiet, safe space to retreat to. Give him time to adjust to any major lifestyle shifts.

9. Poking And Prodding By Children

Though Boxers are known for being wonderful with kids, including babies, always supervise children and dogs of any breed. It’s as much about teaching the kids not to pull whiskers, tails or ears as it is about making sure your Boxer knows the children are above him in the family hierarchy.

Remember, children can be rough. A growl or a raised lip might be the only way a Boxer has to ask them to stop. You don’t want it to come to that. Dogs can snap when surprised and both dogs and children can have lapses of judgment. Make sure you’re there to steer the ship.

Some drugs, like the steroid prednisone, are known to cause irritability, aggression and other psychiatric disturbances. The effects can be particularly pronounced at high doses or when given for prolonged periods. Understand this is beyond your dog’s control and make allowances to keep him safe.

If you have a Boxer, chances are you have a clown that spends half the day lying on his back in the middle of the lounge room, legs splayed in the air.. playing for laughs.

But it’s not fair on your dog to overlook the Boxer’s background as a hunting and guard dog.

Responsible Boxer ownership means being aware of the traits associated with the breed, meeting your dog’s needs and shaping his behavior appropriately. Teach your Boxer how to be a trusted family member and a good canine citizen.

Proper socialization, training, and management will ensure you bring out the best in your Boxer and raise a calm, well-adjusted and gentle dog.

Is My Boxer Overweight?