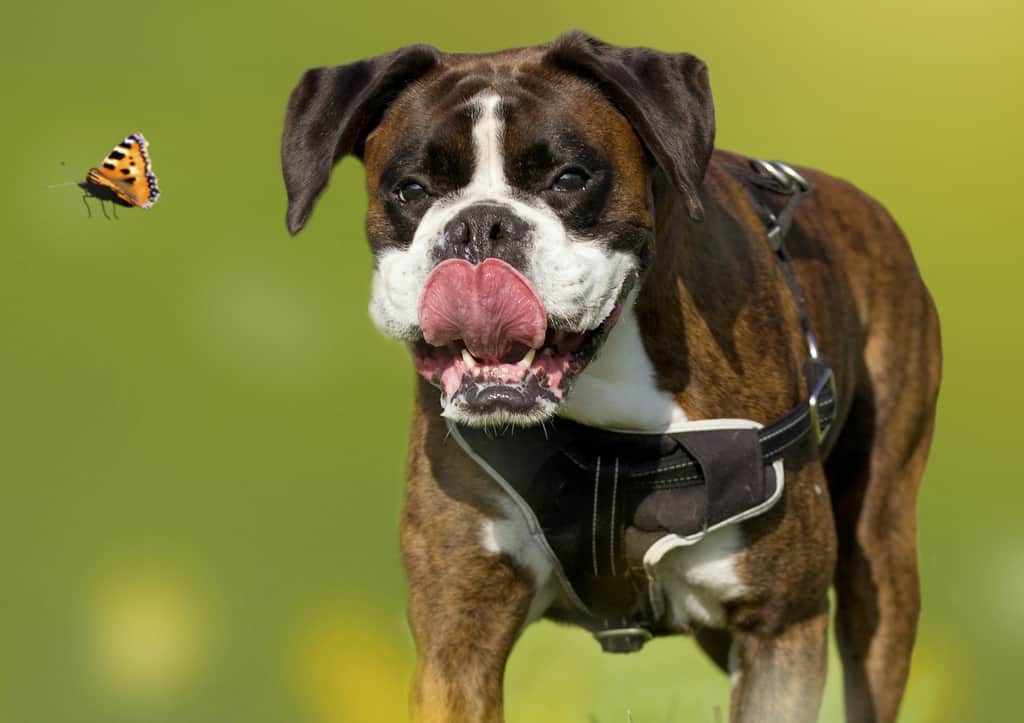 Boxers can have very strong prey drive, albeit packaged within a sweet temperament.

With their heritage as a hunting dog, Boxers have been selectively bred for their prey drive, which is the powerful natural instinct to pursue and catch fast-moving animals, or objects.

Even an otherwise mild-mannered Boxer more accustomed to lounging around the house is capable of morphing into a demon hell-bent on pursuit, if triggered.

But don’t despair. Prey drive can actually be a good thing. You just need to know how to work with it.

What Is Prey Drive In Dogs?

Prey drive refers to a dog’s natural desire to chase and to capture things that move.

It’s why dogs like to play fetch and tug-of-war. But it can also be why they might chase small children, cars, squirrels, or your neighbor’s chickens.

As carnivores, dogs are hardwired to be predators.

Their very survival in the wild depends upon catching and killing prey. That instinct can never be completely unravelled from within their DNA.

Dogs are descended, after all, from wolves. The two share a million years of evolutionary history.

The need to hunt is reflected in the dog’s eyesight. Dogs generally can’t see as well as humans, except when it comes to one thing: the ability to detect a moving object. If it moves, it’s alive and you can catch it and eat it.

Since domestication, dogs are perhaps more familiar to us as opportunistic scavengers.

A pet dog sits politely for his kibble and sedately eats whatever is served up. Other than that he might rummage in the trash can if it’s left open or counter surf.

But, at heart, dogs are born to hunt.

Hungarian dog trainer Tamas Majoros describes prey drive as a “primordial” drive to hunt that is present in all dogs.

This in-built urge can be amplified or suppressed by breeding and training.

What Does Prey Drive Look Like In A Dog?

Think of a Border Collie or a Kelpie herding sheep on a farm. The lowered head, the slow steps. The explosive dash.

In wolves, all these five stages are present as part of a balanced set of behaviors.

In the domestic dog, different breeds exhibit certain aspects of prey drive behavior more than others depending on how the animal has been selectively bred for a particular purpose.

Eye stalking is very strong in sheep dogs but farmers don’t ever want them to bite the livestock.

The chase is dominant in racing dogs while the search is where bloodhounds and beagles excel.

A bird dog is a great example of the search, chase, bite and hold.

Originally bred for bull-baiting, Staffordshire terriers have an amplified grab-bite.

Boxers? Their ancestor the German Bullenbeiser was also used for bull baiting, but since then Boxers have been used for everything from hunting to herding and guarding. Suffice to say, Boxers know how to pursue and to bail up.

As Karla Spitzer describes in The Everything Boxer Book: A Complete Guide to Raising, Training and Caring For Your Boxer, Boxers alert on sound and they attack with a body slam rather than a bite.

Signs Of Prey Drive In A Boxer Dog

Prey drive varies between individual dogs, but you might have a Boxer with high prey drive if your dog:

Generally you can spot high prey drive in a fairly young puppy. This gives you the chance to channel it early to make sure you’re satisfying your dog’s natural instincts, creating a secure, confident, well-adjusted dog.

Other Breeds With High Prey Drive

How To Train A Boxer With High Prey Drive

Prey drive can give rise to some challenging, and downright dangerous, behaviors.

But a Boxer with a high prey drive has the ability to be absolutely focused and single-minded.

This makes a dog highly trainable.

It’s not possible to take the prey drive out of a dog, but you can harness it to your advantage.

A dog with a high prey drive can be more eagerly obedient if you channel their focus where you want it and use their desire to chase as a reward.

If you have a Boxer with high prey drive:

Controlling A Boxer With Strong Prey Drive In The Moment

There are circumstances in which it’s critical a dog not give in to its natural instinct to chase anything that moves.

Going after a snake can be deadly. So can chasing a plastic bag blown by the wind onto a road.

Dogs have been known to run through and shatter glass doors in response to a scent.

Calling back a dog that’s had its prey drive activated is one of the more difficult things you’ll ever attempt as an owner.

This will be a work in progress that take a lot of practice and a staged approach to training.

First of all you need to teach a rock solid recall or “Come” command.

How To Walk A Boxer With High Prey Drive

In general, be equipping your Boxer with the skillset he needs to counter his hardwired prey drive by teaching these commands:

Before the walk, set your dog up for success by:

As dog trainer Cesar Millan puts it, the point is for your dog to learn that “prey drive has an on-off switch controlled by you”.

Tools To Help With Training A Driven Boxer

Managing A “Preyer” Dog With Other Pets

Boxers are usually fantastic with other pets if introduced when they’re young.

The trick as a Boxer owner is to find ways to harness and channel the natural instinct to chase and capture fast-moving animals, or objects.

It’s important to give a Boxer plenty of opportunities to release this energy in constructive ways.

Otherwise the pent-up need to “be a dog” will burst out as problem behaviors.

Essential, too, is equipping your Boxer with the skills to resist temptation and override their prey drive in order to obey your commands — every time.

Can Boxers Be Born With A Bobtail?

10 Reasons Boxers Are Not Outside Dogs