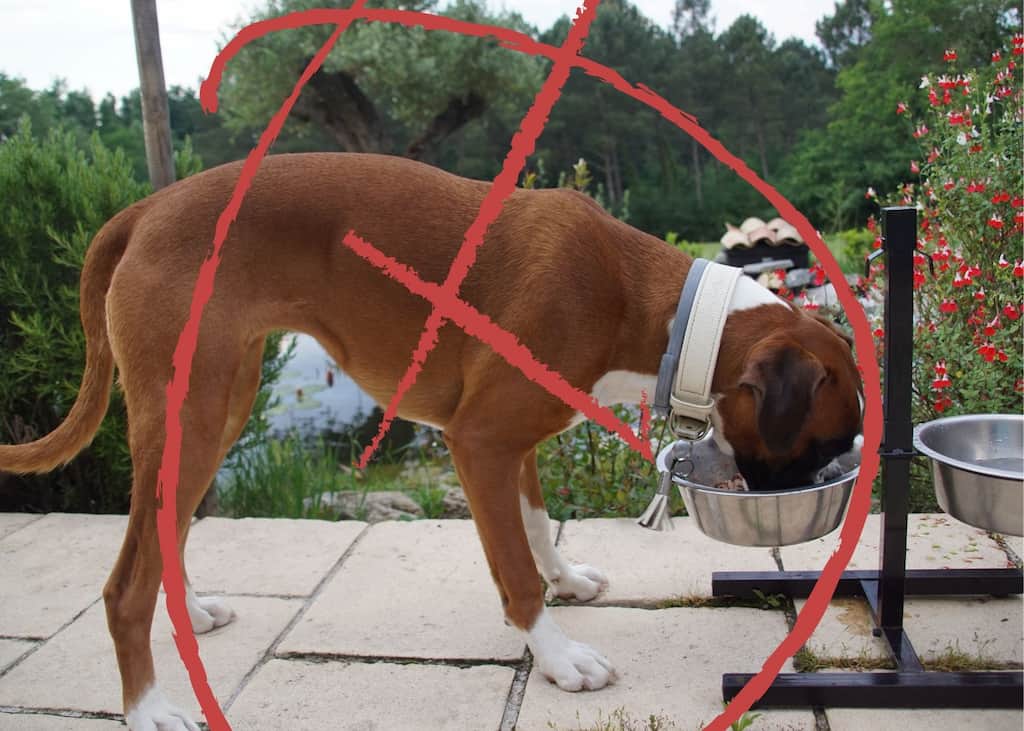 Conflicting advice abounds on the question of raised or floor-level bowls for Boxer dogs.

Boxers should always eat from floor-level dishes and never raised bowls. Elevated platforms have been found to increase the risk of bloat, a deadly condition most commonly affecting deep-chested breeds.

This is the exact opposite of what was advised in the past. Many owners still mistakenly think raised food bowls are safer for their dogs.

However, the most up-to-date research has found eating from an elevated platform actually increases the likelihood of bloat. It is, of course, most natural for a dog to eat straight from ground level.

A 2000 study attributed more than half of all bloat cases in giant breeds to raised bowls, and blamed raised bowls for 20 per cent of bloat in large breed dogs.

Delivering a speech about the risk factors for bloat in dogs at the Tufts University School of Veterinary Medicine’s Canine and Feline Breeding and Genetics Conference in 2003, vet Dr Jerold Bell said raised bowls more than doubled the risk of bloat.

I am not a vet. This post is intended for general informational and educational purposes. I encourage readers to view my full disclaimer. Boxer Dog Diaries is reader powered. I may receive a small commission, at no additional cost to you, if you make a purchase via links I share. Thank you for your support.

What Is Bloat In Boxers?

The veterinary term for bloat is gastric dilation-volvulus or GDV.

A quarter of cases are caused by gastric dilation, which is when the stomach fills with gas and can’t expel it.

But the vast majority of bloat cases (75%) are due to the gastric volvulus part of the equation, where the stomach twists on itself.

Once the stomach twists, dogs can’t swallow, belch or vomit and so there is no way to relieve the mounting pressure from stomach gasses.

What Is The Treatment For Bloat In Dogs?

If you suspect your dog has bloat, it is a true emergency requiring urgent veterinary attention.

Sometimes vets will try to release the air from the stomach by putting a tube down the throat or a needle into the stomach. Other times, surgery is necessary.

This is not a condition you can deal with at home.

If not treated within one to two hours, it can be fatal.

With prompt intervention, the prognosis is good.

One study found 80 per cent of dogs that received surgical treatment for bloat survived.

Vets don’t understand exactly what mechanism causes bloat, but there are known risk factors, like eating too fast.

Besides keeping your dog’s food and water bowls on the ground, there are many other simple things you can do to minimize your dog’s chances of ever encountering this life-threatening situation.

Only exercise your dog on an empty stomach.

Avoid excitement and exertion around mealtimes, particularly after eating.

Put a blanket ban on strenuous activity for at least two hours after eating.

Some owners believe it’s best to rest a dog until morning after a large evening meal.

Avoid walks for two hours after a meal and then keep them slow and gentle.

Ideally, wait at least one to two hours after exercise before feeding.

Certainly never feed a Boxer if they’re worked up enough to be panting.

This is one of the easiest things you can work into your Boxer’s routine and a practice which will go a long way towards protecting your dog from bloat.

Dogs that eat quickly have an estimated 15 per cent higher risk of developing bloat (Source: Tufts). This may be related to more swallowing of air.

The grooves in slow feeder bowls force your dog to eat around obstacles, slowing them down significantly.

A slow feeder bowl like the Outward Hound Fun Feeder is a must if you have a gulper, but it’s recommended for all Boxers.

Other styles of slow feeders include ceramic dishes like the LE TAUCI Puzzle Feeder with bumps your Boxer has to eat around..

Or you might try a slow feeding ball like the Omega Paw Stainless Steel Portion Pacer that you can put in an ordinary bowl to create a similar effect.

Licking mats like the Lickimat Wobble can also be useful in spinning out mealtimes, for both intestinal health and as a “canine enrichment” activity i.e. something to engage your Boxer’s mind in a task or challenge.

Snuffle mats such as the STELLAIRE CHERN Nosework Feeding Mat appeal to Boxers with their keen sense of smell.

There is some thought that the fillers in processed dog food can be a source of bloat.

But that’s not the only way kibble increases a dog’s chances of getting bloat.

According to Australian vet Dr Ian Billinghurst in his book Give Your Dog A Bone, “the excessive calcium in dry dog foods is heavily implicated as a cause of bloat”.

In his Tufts speech Dr Jerold Bell noted there had been a 1500 per cent increase in bloat in the past 30 years, coinciding with more kibble feeding of dogs.

The study noted there was much less bloat in susceptible breeds in Australia and New Zealand where kibble feeding of dogs, at that time, was less prevalent than in the United States.

Some owners believe soaking kibble in water decreases the risk of bloat but Dr Bell says dogs fed dry foods containing citric acid, and which were moistened prior to feeding, had a 320 per cent higher risk for developing bloat. The finding that soaking kibble increases bloat risk has been repeated in other studies too.

Mixing table food or canned food into kibble does help reduce the risk of developing bloat.

There are other commonsense ways in which raw food diets are likely to protect against bloat.

The dog has to tear meat from bones and crunch those bones up, so the pace of eating is usually much slower than for processed foods, whether dry or canned.

Then there’s the high water content of fresh raw foods.

Real, whole foods don’t expand the way dehydrated products like kibble do when they hit the stomach.

Dogs fed their entirely day’s food in one large sitting are more likely to suffer bloat.

Feeding two smaller meals can be a smart move for Boxers.

Dogs aren’t designed to be grazers and there are many health benefits associated with fasting and digestive rest. You can keep the eating at one end of the day and still minimize the bloat risk by giving two smaller feeds 4-6 hours apart.

For the same reason that gulping food is not advisable, don’t let your Boxer drink large amounts of water at once or right after exercise.

Slow feeder bowls can also be used for water.

While water should always be freely available to your dog, it can help to use a smaller bowl or to monitor your dog’s water consumption.

Interrupt him if he’s drinking too much, or even pick up the bowl if necessary. Just make sure you remember to put it back down before long.

Stress …And Other Factors Associated With Bloat

Stress seems to play a role in bloat.

To quote Dr Bell from Tufts again, “many dogs bloat after recent kenneling, or a recent long car ride.”

Your Boxer may also have an increased chance of bloat if he is:

How To Recognize Bloat In Your Boxer

The first symptoms of bloat can be restlessness, drooling and unsuccessful attempts to throw up.

Discomfort can rapidly progress to weakness and pain.

A distended abdomen may or may not be visible.

There might be a hollow drum-like sound when the belly is sharply tapped.

The pulse might be weak and the gums pale and tacky (sticky).

If nothing is done, breathing can become difficult and the dog will finally go into circulatory collapse.

How Common Is Bloat In Boxers?

A 2017 study found of almost 80 000 dogs presenting to emergency clinics in Britain found bloat accounted for less than one per cent of cases.

But it is much more common in deep-chested breeds.

Boxers feature among the at-risk breeds but they’re not right at the top of the list.

That unfortunate spot goes to Great Danes which have a 37 to 42 per cent chance of getting bloat, depending on where you source your statistics.

Other breeds with a higher than average risk of bloat include Irish setters, Irish wolfhounds, standard poodles, Akitas, bloodhounds, German shepherds and Weimaraners 19%.

The risk of bloat goes up if a dog has a blood relative that has suffered bloat, or if the dog has suffered from bloat in the past.

Some vets recommend owners pin their dogs stomachs to the abdominal wall with an operation called “prophylactic gastropexy” to prevent stomach twisting.

It tends to be offered as an add-on procedure when a dog is neutered and can be done laparoscopically via a small incision on the abdomen.

This is automatically done in dogs that require surgery for bloat to prevent recurrence as studies have shown 76 per cent of bloated dogs that don’t have a gastropexy will bloat again, most within three months.

It’s worth noting that six per cent of dogs bloated a second time even with a gastropexy.

A decision to do elective surgery in a young, healthy Boxer is far less clear-cut.

The Pre-Anesthetic Drug Boxers Must Never Have

In Conclusion: No Guarantees

It’s possible to do everything right and still have a dog struck down with bloat.

The Tufts conference heard that dogs can bloat in the middle of the night on an empty stomach.

But this doesn’t mean owners are powerless to protect their dogs from GDV.

It’s worth remembering that dogs do not inherit bloat.

They only inherit a predisposition to it.

This predisposition can be lowered by taking a few commonsense steps in a Boxer’s everyday life.

Is Your Boxer Living His Best Life?

Supercanine is your how-to guide for understanding why your dog has the health niggles he does, and how to heal them before they progress into a full-blown crisis.

If you want to know how to raise a healthy, long-lived wigglebutt free of allergies, itch, acne, “yeasty” ears, paw gnawing, stomach problems and all the other afflictions chalked up to “just part of the breed”, this is the book for you. No more vets, potions or complicated regimes. Just simple yet powerful tweaks you can make to your dog’s care to transform his health.