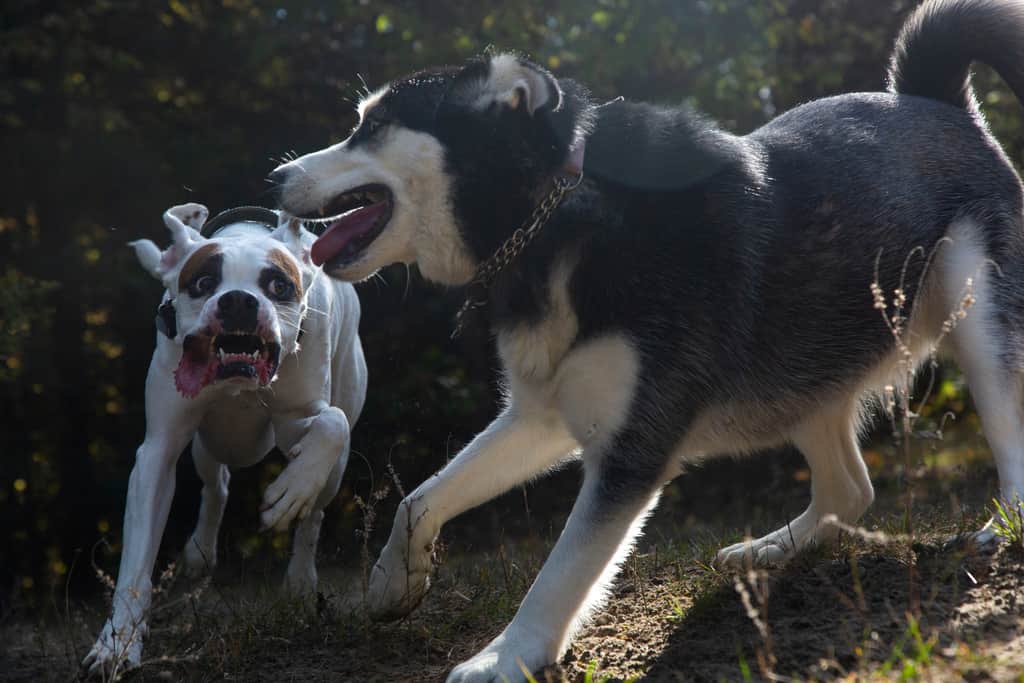 Boxers are generally fantastic with other dogs.

However, all dogs can make mistakes and particular combinations of dogs can clash, depending on the situation.

How well your Boxer gets along with other dogs will depend less on his breed … and more on how effectively you have socialized him and how well you manage him.

Potential Issues Between Boxers And Other Dogs

Not the retiring type!

Their happy-go-lucky approach to life, combined with their fearlessness, can put them in harm’s way if they’re not properly managed.

Situations that are particularly ripe for conflict between dogs include:

What makes these settings appealing is also what makes them potentially dangerous to your dog.

There are frequently new and unknown dogs and untested combinations of dogs from one half hour to the next.

While many dogs behave appropriately, others will bully and menace others.

Owners don’t always recognize these behaviors as problematic, mistaking it as all in good fun.

Even if there are not fights, beneath the color and movement many dogs are often having negative experiences or learning exactly how not to behave.

This isn’t to say dog parks can’t ever work.

But, a lot of variables have to be in your favor.

Keep an eye on the mix of dogs and be prepared to move on quickly if the dynamics change.

Many professional dog trainers advise owners to avoid off-leash dog parks altogether because you just can’t guarantee the safety of your dog.

When you leave your dog at daycare, you are putting his safety entirely in the hands of the staff, who may unfortunately have little more qualifications than a love of dogs.

These settings carry all the risks of off-leash dog parks, made worse by the fact that you are not there to supervise.

When one dog visits a home where another dog lives

This introduces the element of territoriality.

When one dog enters the territory of another, there is more chance of conflict because the resident dog will be more on edge and potentially motivated to “defend” his patch.

Better to have play dates on neutral territory, at least until the dogs are very well acquainted.

They smell different to neutered dogs and they behave differently.

On a primal level, an unneutered dog poses a reproductive threat to other males, which may provoke conflict.

An intact dog may be more dominant and more territorial.

But often it’s through no fault of their own that intact males draw aggressive reactions from other males, both neutered and intact.

Owners of intact Boxers must be aware of this and take measures to protect their dogs from bearing the brunt of other dogs’ sudden aggression.

One Vs. The Pack

The safest interaction is one-on-one.

Whenever there are two dogs from the same household, approach with caution.

Your lone dog will come off worse if there’s an altercation.

If there’s a disagreement, it can set off pack dynamics that can quickly escalate a grizzle into a full-blown brawl.

One Leashed, One Free

This represents a power imbalance.

The dogs are not on an equal footing.

Generally the off-leash dog behaves quite well and the leashed one goes bananas.

A dog attached to a leash can feel trapped or restrained when approached by a free-ranging dog.

This can cause the leashed dog to lash out.

When Owners Drop The Ball

High-risk scenarios require owners to be attuned to the signals dogs are giving off and to know how to effectively intervene before anything goes wrong.

In this way it’s possible to head off problems before they pass a point of no return.

Dogs communicate clearly with each other but much of this goes on beneath the level of human awareness.

When Dogs Are Hyped Up

A tired dog will always be calmer and behave better than one with pent-up energy.

It can help to structure your outings so that your Boxer burns off energy before interacting with other dogs.

At the beach, exercise care around spots where people arrive and first release their dogs.

Right after a dog is first let off the leash is a high-risk moment as they’ll be so excited, they’re not thinking straight.

A dog in this state might easily barrel up to your pup in an overly exuberant manner, which can make a confrontation more likely.

Close To An Owner

Some dogs can be more inclined to get aggressive if they’re meeting new dogs right underfoot of their owner.

This can trigger a misguided protective instinct or jealousy.

Boxers, while gentle and good-natured themselves, can sometimes blunder into situations like a bull-at-a-gate — particularly when they’re young and still learning that not all dogs are friendly.

This in-your-face style is not always well received, and can inadvertently provoke aggressive reactions from other dogs.

For a Boxer owner, it becomes doubly important to be vigilant during off-leash walks.

Which Breeds Are Most Compatible With Boxers?

Boxers tend to be especially wonderful with dogs smaller than themselves.

More often than not it will be the little dog that snaps or growls, and the Boxer that rises above to ignore it.

If a Boxer cops this same treatment from a dog his own size or larger, there is more chance he’ll react in kind.

Boxers tend to be a good match with:

Boxers can clash with:

Of course, these are broad generalizations with plenty of exceptions.

Be guided by an individual dog’s temperament and behavior, not the breed they happen to be.

The single best way to set your Boxer up for success in interacting with other dogs is to be super observant.

Take the opportunity to appraise the way dogs are behaving with other dogs, before they get close enough to spot your Boxer or vice versa.

Is the dog rushing in and jumping on other dogs? Or is he approaching more tentatively and exchanging sniffs with tail wagging? How connected is the dog to their owner? Are they out of control or responding to commands and staying close?

Be prepared to take evasive action to avoid exposing your Boxer to situations that seem unpredictable or likely to turn sour.

How to Socialize Your Boxer With Other Dogs

Socializing a Boxer doesn’t just mean randomly exposing him to lots of other dogs.

If you simply take turn your Boxer loose in dog parks and sign up for puppy school and send him to dog daycare .. a lot can go wrong.

It’s important your dog be exposed to as many unfamiliar situations as possible, including other dogs — but in a controlled, deliberate way.

When socializing your Boxer:

Puppies that leave their mothers at six weeks miss out on an important period of socialization with their littermates.

A puppy should never be removed from his mother before 8 weeks and ideally will be as old as 10 weeks.

During this time a puppy learns all sorts of lessons from his mom and his siblings, including bite inhibition.

Puppies taken away too soon are more prone to behavioral issues including problem biting.

How To Manage Problems Between Your Boxer And Other Dogs

If your Boxer is having trouble with other dogs you encounter on walks, try some of the following strategies:

1. Give Your Boxer Something To Focus On Besides Dogs

Teach your dog a game that you play on the walks.

Carrying a tug toy that you whip out for a session here and there can work well.

You will need to reinstitute high-value treats as motivation.

Perhaps let your Boxer greet other dogs but only for a brief sniff, then move him on.

Choose dogs that you know behave well, so your dog can learn from them.

4. Stop Interacting With Other Dogs

You might want to try this for a while, if your dog’s behavior is really problematic.

Eventually you can go back to interacting, but for now it could be worth taking a hiatus as a bit of a circuit breaker.

What you don’t want is to keep interacting with dogs if things are not going well.

Minimize the opportunities your dog has to repeat undesirable behaviors.

5. Build Your Dog’s Tolerance For Distraction

Play or walk or obedience train with your dog in proximity to, but separated from, other dogs so that he gets practice at not caring what other dogs are up to, and focusing on you.

Outside a fenced dog park can be a great place to build this skill.

You can slowly move closer as your dog improves.

Spend time outside with your dog, encouraging him to remain calm in the presence of dogs and other activity.

Station yourselves somewhere that other dogs pass by but where there’s no interaction.

This will help desensitize your pup to the presence of other dogs.

Sit on the steps of the city library, lie in the park, have a coffee in a cafe.

Teach your dog to watch without having to insert himself into every situation.

Boxers are great observers so they take to this pretty well once they understand clearly what they’re being asked to do.

Your pup will have an easier time containing himself if he’s run out the wiggles.

Work on a “heel” command where your dog is not just loose-leash walking, but maintaining eye contact with you and staying directly by your side.

Make things a game and keep it fun so your Boxer stays interested.

A good “heel” can help you move your dog past distracting situations.

This is a good way to give your dog more freedom to make decisions while retaining control.

If your Boxer has become reactive or is displaying aggression towards other dogs, it might be time to seek the advice of a good positive reinforcement trainer.

Find one experienced with Boxers.

An aggressive dog should never be let off leash or put in a situation where he can be a danger to himself or other dogs.

But not every dog will like every other pup they encounter.

Your Boxer will need guidance to learn how to be a good canine citizen.

Training and constant management is essential, not only to ensure your big lug doesn’t become a liability .. but to keep him safe and sound.

Can Boxers Be Service Dogs?