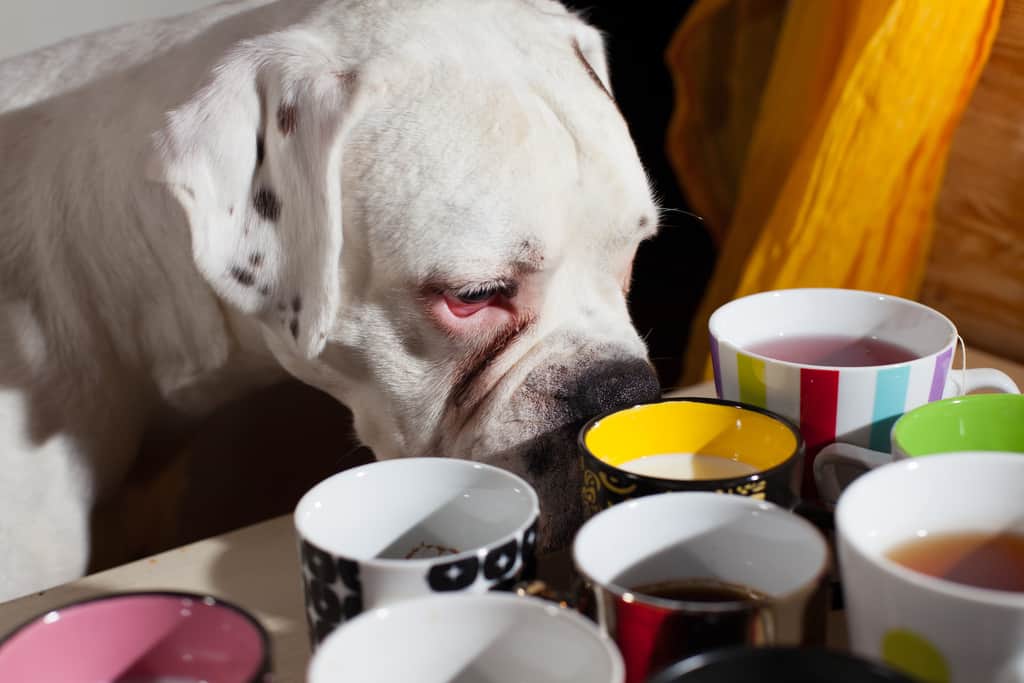 Your Boxer won’t drop dead from stealing a few laps of milk from your glass, but there is no reason to deliberately have your dog drink milk.

Dogs have no biological requirement for the milk of another species.

This means milk is not necessary in a dog’s diet — and the nutrients it contains are readily provided by other, more species-appropriate foods.

Why Milk Is Not Recommended For Boxer Dogs

Dogs can be allergic to milk and to the milk by-products contained in many processed foods.

In her book Canine Nutrigenomics, veterinarian Jean Dodds rules cow’s milk out as a healthy food for dogs for multiple reasons.

For a start, it is “highly antigenic” for dogs — in other words, it’s likely to trigger an allergic reaction.

In some dogs, milk causes:

Some dogs, like some people, don’t produce the enzyme lactase once they’ve finished weaning.

The undigested lactose is converted by bacteria in the gut into volatile fatty acids, hydrogen gas and carbon dioxide.

These by-products are very acidic, irritating the bowel. Because of this, water is not reabsorbed from the bowel like it usually is.

Frothy, smelly diarrhea is the result.

There is a third issue with milk, associated with a genetically mutated protein known as A1 beta-casein that is found in much of the modern day milk supply.

These days, however, about half the cows in the United States produce milk containing the A1 version of this protein.

Even organic and raw milk contains this A1 protein.

A1 cows include breeds commonly seen in western countries like Holstein, Friesian and Jersey cows.

These breeds have proliferated because they produce more milk than their A1 counterparts, which are the lesser known breeds like Gir and Sahiwal native to India.

A1 protein is that it digests differently, releasing a peptide called beta-casomorphin-7 (BCM7), an opioid with characteristics similar to morphine.

This peptide can cross from the stomach into the bloodstream, provoking an autoimmune response and triggering inflammation.

Though not everyone agrees A1 protein is a problem, in his 2009 book, agricultural scientist Keith Woodford called A1 “the milk devil”, citing more than 100 peer-reviewed papers indicating that A1 beta-casein might be responsible for autoimmune diseases including heat disease and diabetes.

Milk is also quite fatty, upping the overall fat content of your dog’s diet.

This is not something most pet dogs need, since they already arguably consume more fat than they should.

Wild dogs eat lean game meats, as opposed to the deliberately fattened livestock which the majority of pet dogs consume.

If you’re going to feed milk to your dog, it will be more worthwhile if you choose raw, unpasteurized milk.

In his book Give Your Dog a Bone, Dr Ian Billinghurst says giving a dog pasteurized milk is “about as good as feeding any other cooked food”.

Most milk is also homogenized.

Homogenization mixes and disperses the fat in milk using a high-pressure procedure to break it into smaller particles that then remain suspended, giving the milk a more uniform consistency.

Alternatives To Milk As A Source Of Nutrients For Dogs

If you are wanting to give milk for its calcium content, there are far more biologically appropriate sources for a dog.

Raw meaty bones are how dogs are meant to receive their calcium (and their phosphorus).

If you feed a natural, canine diet based on raw meaty bones, there is no need to supplement or tinker with calcium levels.

Your dog will be getting the right amount.

If, for some reason, you are needing to add calcium, eggs shells ground to a powder in a clean coffee grinder are a better option than milk.

Note: Intact eggshells given when feeding whole raw eggs are fine to feed but may not provide much calcium since they’re often not digested, especially if you’re noticing egg shell in the poop.

However, liver and egg yolk are two more species-appropriate sources of vitamin A for dogs that will already be in your Boxer’s diet if you’re raw feeding.

Check out our Beginner’s Guide To Raw Feeding A Boxer

Goat’s milk has been successfully used as a milk substitute with young pups.

More on goat’s milk below.

In his experience, cow’s milk augmented in this way rarely causes the diarrhea and other issues often seen with plain cow’s milk.

The theory is this has something to do with the fact that adding protein and fat to the milk, in the form of the raw egg:

(Dog’s milk is twice as concentrated as cow’s milk, containing double the energy, protein and fat, but the same amount of lactose.)

If You Must Give Your Adult Boxer Milk

If you are determined to give milk to your Boxer, milk sourced from sheep or goats is likely to cause him fewer problems.

Most dogs tolerate these milks well.

Goat’s milk is raw and still contains its own enzymes, which usually means even lactose-intolerant dogs can handle it better than cow’s milk.

On the downside, goat’s milk:

Organic, grass-fed milk of all kinds is preferable to conventionally farmed products because it contains:

Should Boxers Eat Other Dairy Products?

Though your Boxer has no need for milk, whether he should eat other dairy products is less clear cut.

Sweetened dairy foods like ice cream are basically frozen confectionery and not appropriate for your dog.

However, Dr Billinghurst does recommend cottage cheese on account of the fact it contains three essential amino acids (leucine, isoleucine and valine) that are said to aid wound healing and help build muscle.

Yoghurt and cheese do not contain lactose, which is good for lactose intolerant dogs but also means the calcium in these products is less well absorbed, as lactose plays a role in helping the body access calcium.

Dr Billinghurst sees a place for plain, natural yoghurt (not the sweetened varieties) in a dog’s diet.

He says it can stand in for the consumption of feces, something wild dogs do but a behavior we rarely let our pets engage in.

With its living culture of bacteria, yoghurt provides a truckload of bacteria that can help normalize the bowel microflora.

Your Boxer doesn’t need milk in his diet and can get the same nutrients from more biologically appropriate sources like raw meaty bones.

Cow’s milk can cause allergic reactions, stomach upset due to lactose intolerance and even autoimmune issues and inflammation due to the presence of A1 protein.

Goat’s milk can be useful for young pups needing a milk substitute.

Give Your Dog a Bone, Dr Ian Billinghurst, 1993

The Devil in the Milk: Illness, Health and the Politics of A1 and A2 Milk, Keith Woodford, Chelsea Green Publishing, 2009

Your Soybeans Are Better For You When There’s Not Tons Of Weedkiller In Them, John Upton, Pacific Standard, June 14 2017