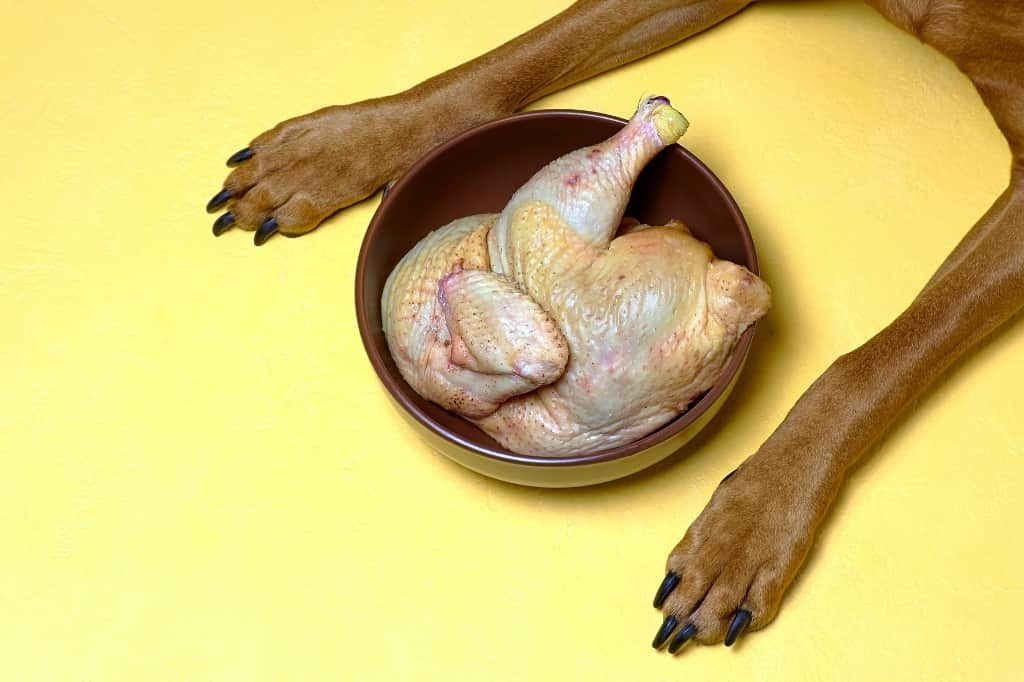 Chicken is perfectly suitable for Boxers when fed in the right way.

Chicken is a nutritious and affordable food and Boxers do well consuming this white meat as part of a balanced diet.

It is a great source of edible bone and should be fed raw — just as dogs have always consumed their meats and bones.

Why Chicken Is Good For Boxer Dogs

The raw feeding pioneer, vet Dr Ian Billinghurst describes raw chicken as “the best all round meat” for dogs.

As a breeder of Rottweilers and Great Danes as well as a vet, raw chicken fed on the bone makes up about 60 per cent of the raw meaty bones he feeds the dogs in his care.

The benefits of chicken as a food for dogs include:

Source: Give Your Dog A Bone by Dr Ian Billinghurst

Note: Cooked chicken bones are dangerous and should never be fed to your Boxer.

How To Feed Chicken To Your Boxer

It’s a good idea to feed chicken alongside other meats in your Boxer’s diet, since the vitamin and mineral content varies between different meats.

Be aware that chicken meat can be among the fattiest meats, depending on what cut you feed and how you prepare it.

Breasts can be quite lean, but legs have many hidden pockets of fat.

Chicken carcasses are typically extremely fatty, and all visible fat and skin should be trimmed to return the frame to a more natural meat:bone:fat ratio.

Is Chicken Ever Bad For Boxers?

Dogs Naturally Founder Dana Scott stopped feeding chicken to her dogs because of the unnatural way conventionally-farmed chooks are raised.

First, there is the food chooks are given.

Chickens are supposed to eat grasses and insects.

But the average conventionally-farmed chook subsists on a diet of commercial chicken feed, made of corn and soy meal and other waste products left over from human food manufacturing.

This diet is so deficient that it has to be supplemented with synthetic vitamins and minerals.

As a result, the chook’s body develops the same imbalance.

The high Omega-6 levels in chicken flesh are then passed up the food chain to animals that eat the chicken .. like your dog.

Diets high in Omega-6 fatty acides and low in Omega-3s cause chronic inflammation in the body.

As Dogs Naturally highlights, ongoing inflammation has a role in causing nearly every chronic disease from joint pain to diabetes and kidney disease.

But this doesn’t necessarily mean you can’t feed chicken.

(It’s quite tricky to find an alternative source of edible meaty bone, which your dog needs in every meat meal.)

It is a reason to feed more naturally-reared chicken.

Since the Omega-6 to Omega-3 ratio of chickens is a result of what they’re fed, free-range, organic chicken is likely to have a more natural balance of fatty acids.

And it’s a reason to make sure you’re not feeding only chicken.

Including grass-fed (and ideally organic) beef in your dog’s meals provides meat with a healthier balance of fatty acids.

Are Chicken Necks Linked To Paralysis In Dogs?

An Australian vet school recently produced a piece of research warning owners not to feed chicken necks because they contain the Campylobacter bacteria, which they suspect may be a risk factor for a rare form of paralysis known as acute polyradiculoneuritis (APN).

Because the nerve disorder shares similarities with Guillain-Barré Syndrome (GBS) in humans, and the latest theory is that the bacteria Campylobacter spp. plays a role in triggering GBS in people … researchers went in search of a connection between the bacteria and APN in dogs.

The sample size was 27 dogs with suspected APN and 47 healthy dogs.

The researchers found a majority of the sick dogs had been fed raw chicken and therefore advised owners to feed “regular dog food” instead.

However, as the holistic vet clinic The Natural Vets, points out: correlation is not causation.

The Natural Vets say the study framework failed to examine many important factors including:

Notably, campylobacter was found in healthy dogs as well as sick ones.

Rather than avoiding raw chicken, The Natural Vets recommend minimizing your dog’s toxic exposures, which over time through a “stacking effect”, result in disease.

The Natural Vets don’t recommend feeding chicken necks but it has nothing to do with bacteria or paralysis.

They regard the shape and size as a choking hazard and the high bone and cartilage content as a constipation risk.

But this clearly depends on the size of your dog, whether he’s a gulper, how much is fed and the composition of the rest of the meal ie. the overall bone and cartilage content of the diet.

Are Some Boxers Allergic To Chicken?

Many dogs testing positive for “allergies” to chicken only experience the problem when the chicken is fed one of two ways:

These supposedly allergic dogs almost always go on to consume chicken with no problems whatsoever when it is fed in its fresh, raw form.

In other words, when it’s fed in a species appropriate form.

Dogs are carnivores and their bodies are designed to consume meat raw, not cooked.

It’s possible some “allergic to chicken” dogs are reacting not to the chicken itself, but to either:

The extra money you spend on buying high quality chicken will be saved in the lack of vet bills later.

Boxer puppies can be weaned at five or six weeks old, straight onto minced chicken wings and necks.

After about ten days, the puppies will be handling the wings and necks whole, without need for further grinding.

See also: What To Feed A Boxer Puppy

Other Poultry Good For Boxers

Full grown Boxers are usually so large as to require chicken carcasses as their edible bone, rather than smaller birds.

However, other poultry is also suitable, including:

Fed once or twice a week, eggs offer a powerhouse of nutrition for a Boxer.

Boxers can eat chicken and other poultry.

Feeding chicken this way — as opposed to cooked or in kibble — usually avoids so-called chicken “allergies” which are more akin to a reaction to toxic residues from hormones, growth promoters and antibiotics found in factory-farmed chooks.

Give Your Dog A Bone, Dr Ian Billinghurst, 1993

How To Choose The Best Collar For Your Boxer