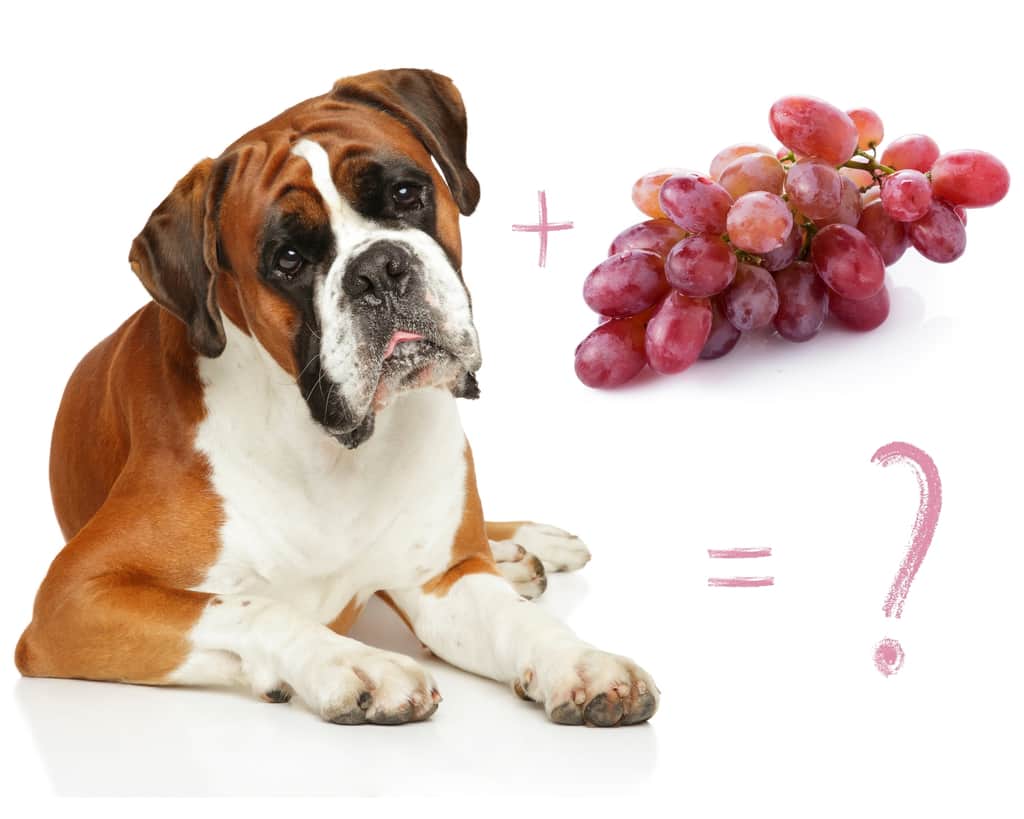 Boxers can safely enjoy most fruits, but grapes are one to avoid.

While some owners report feeding grapes with no adverse effects, grapes have a history of causing acute renal failure and death in dogs.

Exactly how grapes poison dogs remains unknown, even in 2021.

Grapes that tested free of pesticides and free of mold have caused problems … and both seedless and seeded varieties are implicated.

Raisins, currants and sultanas are all made from dried grapes and are also toxic to dogs.

Are Grapes Safe For Boxer Dogs?

The available evidence suggests grapes are not safe for your Boxer, or any other dog.

According to the ASPCA Animal Poison Control Center, sensitive dogs have a risk of initial gastrointestinal upset followed by acute renal failure.

They call it “grape or raisin toxicosis” or GRT.

Why Do Grapes Cause Problems For Dogs?

This is a mystery.

The exact mechanism of grape and raisin toxicosis is unknown.

What’s strange is that some wolves do eat grapes.

Dogs Naturally Magazine reported that zoologist and wolf researcher Dr Isla Fishburn told the 2016 Raw Roundup conference that individual wolves had been observed eating grapes as part of their diet.

Grape toxicosis in pet dogs was unheard of until the 1980s.

This timing would support the theory that it’s related to pesticides.

Are Pesticides To Blame For Grape Toxicity In Dogs?

In an interview in 2016, the FBI analyst Melissa Gardner told integrative veterinarian Dr Karen Becker that wine from Californian grapes contained high amounts of fluoride, from the fluoride-based pesticide cryolite.

Cryolite has been in use since the eighties, which is exactly when vets first noticed raisin toxicity in dogs.

According to United States Department of Agriculture data, grapes are the sixth most pesticide-laden fruit.

(Strawberries were the most contaminated, followed by spinach, kale, nectarines and apples.)

In some cases, grapes that have caused acute renal failure in dogs have been tested for pesticides, heavy metals and mycotoxins .. and found to be negative for all three substances.

What if the pesticide itself was not detectable, but some of its base ingredients, like fluoride, were present in amounts large enough to be toxic?

Which Part Of The Grape Is Toxic?

It’s not known whether the skin of the grape is the problem, or the flesh.

What Kinds Of Grapes Cause Problems For Dogs?

Grapes in a wide variety forms have been associated with acute renal failure in dogs, including:

Are All Grape-Related Products Dangerous?

Dried grapes of all kinds are just as risky as grapes.

Never give your Boxer:

In fact, these products are even more likely to cause problems because the drying process concentrates nutrients.

Grapeseed oil or extract (made from the seeds of grapes) does not appear to be a threat.

(Grape seed oil is not recommended for other reasons, namely that it’s high in omega-6 fatty acids, which will further skew a modern dog diet already high in omega-6s compared to omega-3s.)

What Is A Toxic Dose Of Grapes?

No one knows how many grapes a Boxer has to consume to get sick or die.

Some dogs have severe reactions after just a few grapes, whereas others consume a whole bunch and are fine.

The lowest documented grape dose to cause acute kidney injury is:

The good news is grapes seem to digest slowly.

Whole grapes have been found in a dog’s stomach the morning after the day they were consumed.

This means if you act fast, you have time to save a dog that’s accidentally eaten grapes.

Symptoms Of Grape Or Raisin Toxicosis

The most likely sign of grape toxicity that you’ll see in the first 2 hours is vomiting.

Symptoms that typically occur within the first 5 to 6 hours include:

Some studies suggest problems can arise as long as several days after consuming grapes.

But if your Boxer is going to suffer an adverse reaction to grapes, you will usually know it much sooner than that.

Symptoms of grape toxicosis typically appear after 6 hours and almost always within 24 hours.

This is called uremia, the presence in the blood of urea and other nitrogenous waste compounds normally excreted by the kidneys.

The condition may worsen to encompass:

How Is Grape Toxicosis Diagnosed?

Diagnosis of GRT hinges on:

A recent study out of Switzerland suggests the presence of neurological symptoms can make initial diagnosis of grape toxicity more difficult.

Swiss researchers found neurological disturbance can occur early in the onset of grape toxicity, even before bloodwork shows abnormalities.

These findings suggest that if a dog has severe gastrointestinal disturbance alongside neurological symptoms and may have had access to grapes, grape toxicosis should be considered.

An acquired toxic syndrome known as “uremic encephalopathy” is well-described in human medicine.

Inadequately treated end-stage renal patients develop confusion and can end up having seizures and lapsing into a coma.

Any diagnosis of GRT should first rule out other causes of acute renal failure such as:

How Do You Treat Grape Poisoning In Boxer Dogs?

If your Boxer has consumed grapes, you want him to vomit to expel the grapes.

How To Make Your Boxer Vomit After Eating Grapes

She says to give your dog 3 per cent hydrogen peroxide at a dosage of just less than 1mL per pound of body weight (2 mL per kg) … but give no more than 45mL in total.

Your dog should throw up within 15 minutes.

Vomiting can work as long as no more than 2 hours has passed since your dog ate the grapes.

Activated charcoal can be given afterwards, to absorb remaining toxins.

What Will Happen At The Vet

Blood chemistry should be monitored for 72 hours, including renal enzymes.

When the dog has gone into anuric (not producing urine) renal failure, vets may resort to drugs like:

Other procedures may be used to purify the blood, including:

What Is The Prognosis If A Boxer Develops Grape Toxicosis?

Studies suggest slightly more than half of dogs that suffer acute kidney injury as a result of eating grapes will survive.

In one study of 43 dogs with grape-induced renal failure:

The likelihood of survival depends on:

If the dog stops urinating (becomes anuric), the prognosis is said to be poor.

How To Prevent Your Boxer Eating Grapes

Rather than in the fruit bowl, store grapes in the fridge where your Boxer can’t reach them — even by counter surfing.

Take care when unpacking groceries or eating grapes yourself.

Be sure to pick up any grapes that are dropped, before they can roll under benches and be forgotten .. to be discovered by your dog later.

Safe fruits to feed your Boxer include:

Melons like papaya, cantaloupe and honeydew are all suitable for dogs and have the added benefit of being among the fruits least likely to be contaminated with pesticide residues, according to the most recent USDA data.

Grapes, raisins, currants and sultanas are known to cause kidney failure in dogs.

Dogs have died after eating them.

It’s true that some dogs appear to be able to consume grapes with no ill effects.

But with so many other entirely safe and delicious fruits to choose from, why take the risk?

Acute Renal Failure in Dogs After the Ingestion of Grapes or Raisins: A Retrospective Evaluation of 43 Dogs (1992-2002)