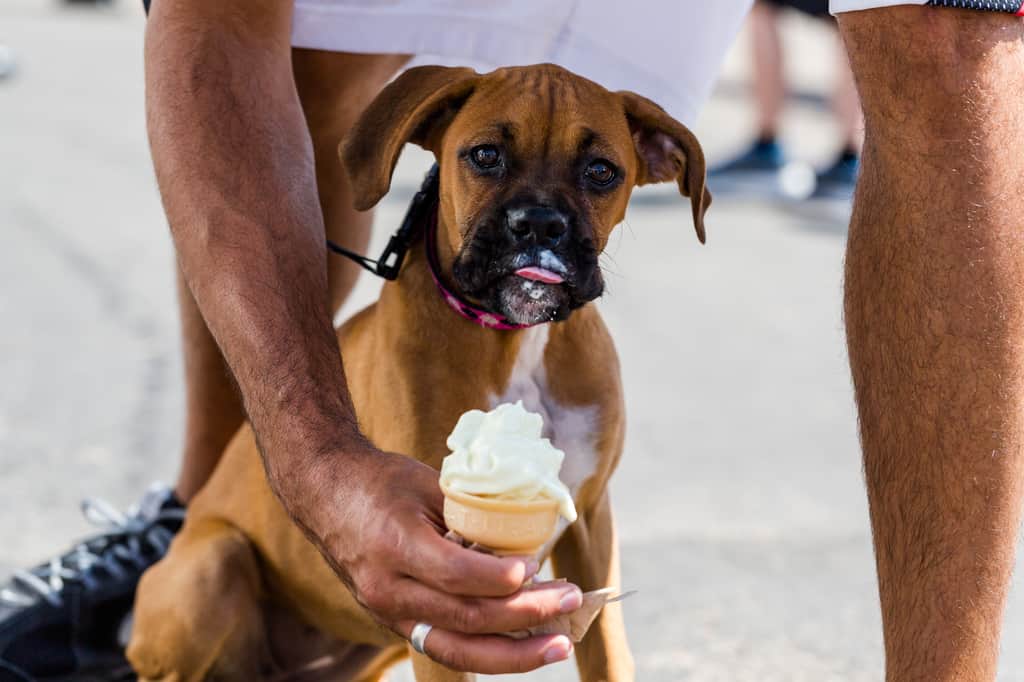 There are countless videos on social media of owners giving their Boxer dogs ice cream as a treat.

While it’s unlikely your Boxer will suffer major problems as a result of having a lick or two of your ice cream cone, there is no nutritional benefit and he’ll be better off if you don’t make a habit of it.

Some types of ice cream do contain ingredients that, in large enough amounts, are toxic to dogs.

And there are far better ways to treat your dog that are both biologically appropriate and will give him far more enjoyment.

I am not a vet. This post is for general informational and educational purposes only. I encourage readers to view my full disclaimer. Boxer Dog Diaries is reader powered. I may receive a small commission, at no extra cost to you, if you make a purchase via links I share. Thank you for your support.

While you mightn’t be able to imagine anything more appealing than a bowl of ice cream, your Boxer doesn’t share your human cravings.

As a dog, he would much prefer to spend a few hours getting stuck into a raw meaty bone.

Ice cream is a frozen dessert.

As such, it has no nutritional value for your Boxer (or for you, truth be told).

It’s a junk food, even for humans.

While ice cream contains sugar, it is mostly fat.

A majority of pet dogs in the United States are now overweight or obese, so the last thing they need is more fat.

Most Pet Dogs Are Fat. Is Your Boxer One Of Them?

But fat content is the least of the problems ice cream can pose for your Boxer.

Like any processed product, ice cream commonly contains additives, many of them synthetic, including:

The Food and Drug Administration in 2018 banned several artificial flavorings previously used in ice cream, due to their association with cancer in animal studies.

Ice cream has no place in a species appropriate canine diet.

For the same reason you wouldn’t give your Boxer candy, you really shouldn’t give him ice cream.

#2 Ice Cream Contains Lactose, Which Your Boxer May Not Digest Well

Dogs are not meant to consume the milk of another species.

As puppies, they are able to digest their mother’s milk.

But, once weaned, dogs stop producing the digestive enzyme lactase, which is needed to digest the milk sugar lactose.

This creates lactose intolerance, which results in digestive upset when milk is consumed but can’t be properly digested.

The symptoms of lactose intolerance that your Boxer may suffer after eating ice cream include:

#3 Dogs Can Be Allergic To Milk Protein

While true food allergies and intolerances are rare in dogs, your Boxer may have a reaction to the protein in milk.

Food Allergies: What Every Boxer Owner Should Know

Most modern cow’s milk contains a mutated protein called A1 beta-casein, which digests differently to the original, A2 form of this protein.

Though how much of a problem A1 protein poses is hotly debated, agricultural scientist Keith Woodford in 2009 published the book Devil in the Milk: Illness, Health and the Politics of A1 and A2 Milk in which he deemed A1 protein “the milk devil”.

A1 protein releases a peptide called beta-casomorphin-7 (BCM7), an opioid with characteristics similar to morphine.

This peptide can cross from the stomach into the bloodstream, provoking an autoimmune response and triggering inflammation.

In his book, Woodford references more than 100 peer-reviewed papers indicating that A1 beta-casein might be responsible for autoimmune diseases including heat disease and diabetes.

#4 Ice Cream Can Contain Ingredients Toxic To Your Boxer

No ice cream is appropriate food for your Boxer, but some kinds may cause him more problems than others.

Never give your dog ice cream that contains ingredients known to be toxic to dogs, such as:

While it’s highly unlikely that licking your ice cream stick will expose your Boxer to enough to cause a life threatening reaction, all of the above ingredients can poison dogs.

Of the above ingredients, xylitol is perhaps the biggest threat, as this artificial sweetener is highly toxic to dogs.

Steer clear of sugar-free ice cream as it may contain xylitol.

5 Foods Your Boxer Should Never Eat

Before digestion begins, food must be warmed to body temperature.

This is why raw feeding owners don’t serve meat straight from the fridge, but allow it to come to room temperature.

Rarely in nature will you see a dog consume anything frozen.

In winter, wolves may occasionally, out of necessity, eat carcasses that have frozen in the snow.

Normally though, dogs eat warm meat, consuming their prey right after they’ve caught it and while it’s still at body temperature.

How To Raw Feed Your Boxer
Should Boxers Eat Kibble?

Give This Treat To Your Boxer Instead Of Ice Cream

If you are giving ice cream because it’s a dairy food, there are far healthier ways to boost your dog’s calcium intake.

Even other dairy foods like milk or cheese have more nutritional value.

But dogs have no requirement for dairy products, making them unnatural canine foods.

Raw meaty bones are the ultimate treat for dogs and contain calcium and phosphorus in perfect balance.

Your Boxer will be ecstatic to receive one.

Lamb necks make a great choice as they’re non weight-bearing (and so softer on teeth) and from young animals (resulting in fewer toxins accumulated in the fatty tissue).

Just be sure to trim the thick fatty sheath first and to supervise bone consumption.

The benefits of raw meaty bones for dogs extend from nutrition and dental health (no more dental cleanings under anesthetic!) to the deep psychological satisfaction that carnivores derive from crunching on bones.

How To Feed Bones To Your Boxer
Best Chews For Boxers

There are behavioral benefits too, since a dog that’s happy and satisfied and given a healthy outlet for his natural urges is far less likely to engage in destructive chewing or nuisance barking.

How To Stop Your Boxer Chewing Everything
Nuisance Barking In Boxers

If you must give a frozen treat to your Boxer, a far healthier choice than ice cream is simply frozen fruit.

Fruit is a biologically appropriate food for dogs.

Wolves eat fruit as a secondary food in the wild, when prey is scarce.

Alternatively, you can make a doggy ice cream by blending ripe bananas and then freezing.

Give sparingly, since frozen or cold food is not conducive to optimal digestion.

Room temperature fruit is an even better option.

Fruits A Boxer Can (& Should) Eat
Treat Your Boxer Right: Healthy Food Rewards

Sometimes as owners, we are tempted to give our Boxers foods that we ourselves consider a treat … but which are biologically inappropriate for dogs.

If you want to celebrate your Boxer’s birthday or spoil him?

Forget the Mister Whippy and give him what he really wants, and something that will enhance rather than undermine his health: a raw meaty bone.

Surprised to hear ice cream is no good for your Boxer?

Peanut butter isn’t appropriate for your Boxer either.. nor are many other human foods commonly given to dogs.

The Devil in the Milk: Illness, Health and the Politics of A1 and A2 Milk, Keith Woodford, Chelsea Green Publishing, 2009

Martino JV, Van Limbergen J, Cahill LE. The Role of Carrageenan and Carboxymethylcellulose in the Development of Intestinal Inflammation. Front Pediatr. 2017;5:96. May 1 2017