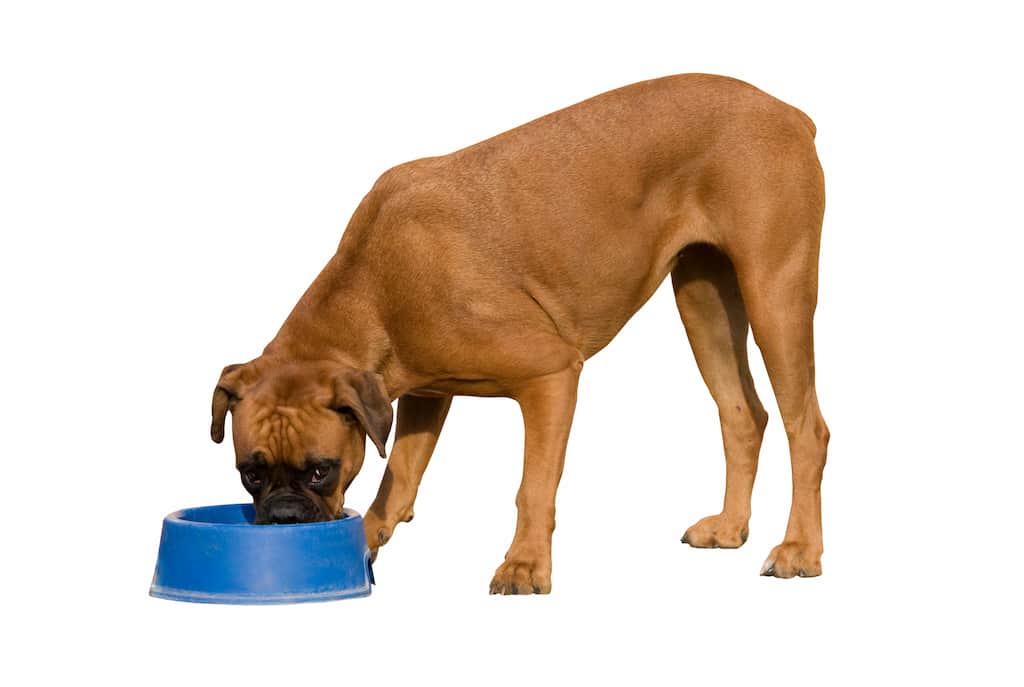 Fish makes a healthy addition to your Boxer’s diet, with some important caveats.

You can safely feed fish to your Boxer on the proviso that it is always raw, does not constitute the main protein in your Boxer’s diet and that you choose small, oily fish.

Sardines are a much better option than tuna, for instance, because they contain much lower levels of mercury and other ocean pollutants that accumulate up the marine food chain.

Salmon is another fish you may wish to avoid.

I am not a vet. This article is intended for general informational and educational purposes. I encourage readers to view my full disclaimer.

Rule #1 Boxers Can Eat Fish, As Long As It’s Raw

This means canned fish is out of the question, because it’.s cooked.

Cooking not only denatures proteins and destroys beneficial bacteria and enzymes, it also makes bones unsafe.

Cooked bones are brittle and prone to splintering, which makes them dangerous on two fronts:

Canned fish is also usually prepared with additives, preservatives, spices, salt and other flavorings that don’t belong in your Boxer’s body.

So, buy your fish fresh, raw and ideally whole from the fishmonger.

This gets the fish as close to the form in which dogs eat it in the wild.

Rule #2 Sardines Are Better For Your Boxer Than Tuna

Certain types of fish make a healthier choice for your Boxer than others.

Other large fish to avoid include:

Sardines are perhaps the best fish for your Boxer dog to eat.

Reasons to feed sardines to your Boxer include the fact that sardines:

Other small oily fish that are a good choice include:

It’s an unfortunate reality that because of contaminated oceans worldwide, fish are not fit to form the basis of your Boxer’s diet.

Nor do wild dogs ever eat fish as their main diet.

Mercury And Other Toxins

Contaminants in seafood include:

Mercury accumulates in tissues, so even a little every day can add up over time.

Note that fish contained as “fish meal” in kibble and other processed dog food is not only cooked, and subject to all the same contamination concerns as raw fish, but it often contains a chemical called ethoxyquin.

Ethoxyquin is a known cancer-causing agent, banned from use in human food except in minute amounts as a preservative in spices.

Prominent integrative vet Dr Karen Becker has spoken out about this danger — her own Rottweiler went into liver failure after consuming a major “veterinary line” pet food containing ethoxyquin.

Another reason not to feed too much fish is that it is oily.

On the plus side, oils are what make fish a great source of fatty acids like omega-3 fatty acids which:

Far better to feed whole foods than to try to meet your Boxer’s fatty acid requirements by dosing with fish oil, which is prone to going rancid.

Yet, you must remember to factor in the fat content when feeding oily fish.

Whether on account of toxins or fat content, feeding fish in moderation is good practice — as with any one food type.

So, include fish as an occasional addition to your Boxer’s core raw diet comprised of three main components day in, day out:

For best digestion, remember to feed meat separately to plant matter, which is how dogs eat it in the wild.

Farmed fish tends to be raised in less than ideal conditions.

Farmed fish such as salmon or tilapia, a very popular fish in the US, may well be:

In addition, farmed tilapia often comes from China where fish are fed low quality feeds and kept in poor conditions, leading to overuse of pesticides as well as antibiotics.

Is salmon good for Boxer dogs?

On the face of it, it certainly has a lot to recommend it.

However, farmed salmon is a hard no, as explained in rule 4.

And wild salmon comes with its own risks.

Many advise raw salmon shouldn’t be fed because it may contain a parasite called Neorickettsia helminthoeca.

This parasite can cause salmon poisoning which can kill a dog without prompt treatment.

While cooking certainly kills bacteria and other parasites, it also ruins salmon as a food for your Boxer, since a dog’s natural diet is by definition raw.

According to Dogs Naturally Magazine, Neorickettsia helminthoeca is typically found in Pacific Salmon and freezing for two weeks should kill it.

Buying human grade salmon ensures the fish has been through the highest meat inspection processes.

But, with so many other nutritious fish to choose from, there is no need to risk feeding salmon.

Other Seafood Boxer Dogs Can Eat

Aside from small oily fish like sardines, there is plenty of other seafood you can mix in to your Boxer’s rotation.

Let’s take a look at just two of the options:

Benefits of green lipped mussels include that they are a rich source of:

Green lipped mussels can be fed as freeze-dried treats.

Make sure the mussels haven’t been heat treated as that destroys their value to your dog.

Kelp is plentiful in vitamins, minerals like iodine and trace minerals.

Kelp can be given as a powder made for dogs.

Feeding fish will deliver benefits to your Boxer dog as long as you keep in mind a few cautions, and select the right type of fish.

You can’t go wrong if you feed fresh, raw wild-caught sardines once a week or so.

Skip both tuna and salmon due to the risk of toxins and parasites respectively.