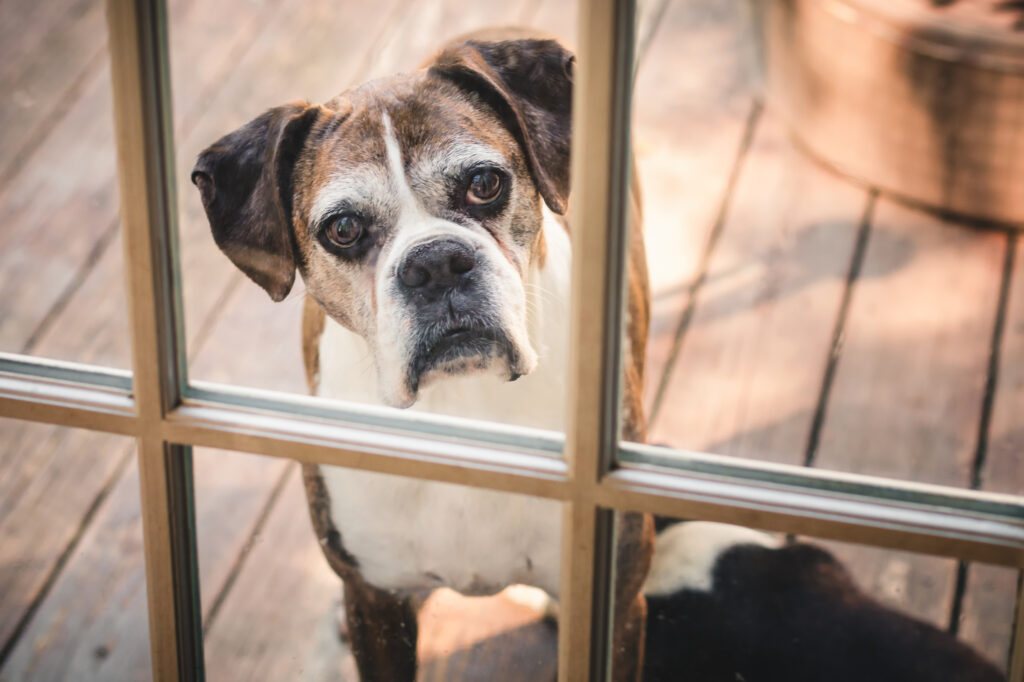 Most Boxer owners react with horror to the thought of a Boxer being left outside for long periods. They know the breed and how people-oriented they are.

Boxers are not outside dogs. They are not suited to sleeping outside at night. Nor should a Boxer be left outside alone during the day.

As one of the many agencies rehoming Boxers given up by people who didn’t understand the breed, Atlanta Boxer Rescue wants prospective owners to understand, “Boxers should NEVER be outside dogs.”

10 Reasons Boxers Are Not Outside Dogs

If you want a happy, healthy, well behaved Boxer, keep him wherever you are.

There are a heap of reasons not to leave a Boxer outside for any length of time.

Some relate to your dog’s emotional wellbeing.

Others are to do with physical health.

Boxers love people to the point that it’s cruel to keep them separated from their family.

This breed is playful and fun-motivated and will quickly get bored and lonely if left alone in the backyard.

With a long history as a working dog, the Boxer needs to be busy.

The Distinguished History Of The Boxer

Idle Boxers will make up their own tasks — like chew the tires off the car or the door off its hinges — if not given things to do or allowed to participate in family activities.

Sensitive dogs, Boxers are very attuned to their owners and will take it to heart it if they’re not receiving plenty of love and affection.

Highly active both physically and mentally, they will stick their noses into everything which means they can get into trouble if left to their own devices, and need a lot of attention and supervision.

When they’re hot, dogs perspire through their paw pads and by panting.

Even with drinking water and shade provided, a Boxer should never be left outside for even a short time in anything other than mild weather.

Your Boxer probably needs the air con in Summer more than you do.

15 Ways To Leave A Boxer Home Alone (And Happy)

Prolonged exposure to heat can progress from heat stress to heat exhaustion and then to heat stroke, which can be fatal.

Symptoms of heat exhaustion include:

Signs of heat stroke include:

Above 105 degrees heat stroke starts to set in.

A dog with heat stroke has lost his ability to regulate his own body temperature.

How to avoid overheating your Boxer dog:

Low temperatures can pose almost as much of a threat to Boxers as heat.

With their short coats, and lack of undercoat, they have no insulation from the cold.

Depending on his lifestyle, your Boxer will probably need a jacket for winter.

We love the Carhartt Insulated Dog Chore Coat which comes in brass as well as hunting orange.

Best Clothes For Boxers: Our Picks For 2022

Even with a jacket though, your Boxer should always be left inside where it’s comfortably warm but not too stuffy.

If you want to provide your Boxer with the ability to visit the backyard for toilet breaks, by all means install a dog door like the PetSafe Freedom Door, but don’t leave him stuck outside all day long.

A bored and lonely Boxer is creative enough, and motivated enough, to do something to change his predicament.

Their ability to jump and scale even seven foot fences like this one means a Boxer relegated to the backyard may well become a flight risk.

Dogs that escape from yards are all too often lost or, worse, hit by cars.

Perhaps you’ll get lucky and your Boxer will only dig up the entire flower bed.

How To Stop A Boxer Digging Holes

Avoid the whole drama by protecting your Boxer when you go out — leave him safely inside where he’s happy to be.

The Boxer’s inquisitive nature can get him into trouble.

Bee stings are far too frequently suffered by Boxers left unsupervised outdoors and can be serious.

Sometimes Benadryl works to bring down facial swelling, but not all dogs are so lucky.

Should I Give My Boxer Benadryl?

Bee stings can result in an intense allergic reaction known as anaphylactic shock, which can cause breathing difficulties and even kill.

Boxer Stung By A Bee?

Mosquito bites are also much more likely if a dog is left outdoors for extended periods. The concern here is more than itchy bites.

Mosquitoes are how dogs catch heartworm.

The moral of the story is: your Boxer does not belong outdoors on his own.

With their lack of pigment, white Boxers are especially prone to sunburn which can lead to canine skin cancer.

But even fawn and brindle Boxers frequently have white flashes on their faces.

Muzzles and bellies, where fur is sparse, can easily burn.

A little lying in the sun is fine and healthy, but you need to supervise and limit your Boxer’s sun exposure, particularly during the hot midday hours.

We don’t recommend sunscreens which contain chemicals that are inevitably licked off and consumed.

However, sun shirts like the Gold Paw Sun Shield, pictured in pistachio, can be worthwhile.

If all dogs are social creatures, Boxers are known for being particularly attached to their human pack.

They crave days filled with interaction and activity.

They need to be included in just about every aspect of the family’s life.

A Boxer left isolated in the backyard will lack a sense of belonging.

Dogs feel safe in their pack.

That sense of security is essential for general wellbeing.

In extreme cases, Boxers that are improperly managed at home can develop separation anxiety.

This is a clinical condition akin to a human panic attack, which can be associated with destructive behaviors and causes enormous physical and mental distress to the dog.

For purely practical purposes, your life will be a lot easier if your Boxer knows how to behave in the house.

A dog only let inside occasionally will never have enough practice to learn how to deal with things like vacuum cleaners, doorbells, you name it.

Then there are all the undesirable behaviors that can arise outside when a Boxer is left unattended, from digging up the garden to incessant barking.

Boxers are quiet dogs, so if yours is barking a lot, there’s a fair chance he’s bored or lonely.

Barking can be a way to self soothe or it can be a cry for attention.

How To Stop A Boxer Barking

It shouldn’t have to be something you think about, but dogs have been known to be stolen from back yards and even attacked by unhinged individuals.

Purebred Boxers are a very distinctive looking and sought-after breed.

They can also be easily befriended by strangers.

Poisoning, whether accidental or deliberate, is a threat for a dog left outdoors alone.

Neighbors unhappy about barking can take sometimes criminal action to shut a dog up.

Boxers can too easily be poisoned by snail bait or rat bait or even rats that have consumed rat bait.

If you share a fence line, it’s not just your own property you need to worry about.

Fertilizers stored in sheds and lawncare chemicals and weedkillers sprayed on grass are highly toxic to dogs.

Glyphosate has long been linked to cancer in humans.

Toxic accumulation, by its very nature, builds over time and can have serious and not-well-understood consequences for your Boxer’s health, so it’s well worth minimizing exposures wherever possible.

Indoor Hazards For A Boxer

Indoor environments come with their own set of dangers when you’re a Boxer.

Be sure to dog proof your house and beware of:

Other Places Never To Leave A Boxer

Final Thoughts On Boxers As Outside Dogs

If your idea of a dog is a guard that stays in the backyard and sleeps in a kennel, then Boxers are not for you.

A Boxer is happiest inside with his people, often right on someone’s lap.

Boxers are so lovable and entertaining that most owners don’t want to spend any more time away from their dog than they absolutely must.

Both temperament-wise and for a range of physical health reasons, a Boxer really needs to be with you, not left outside alone.