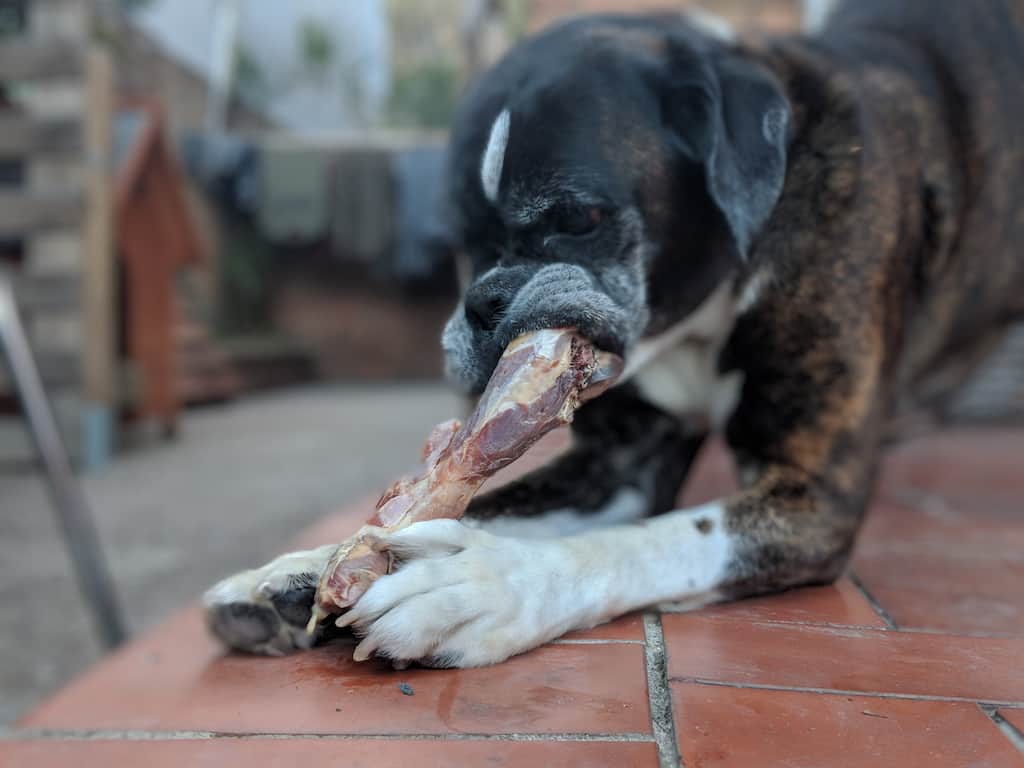 Boxer dogs can eat bones, as long as they are raw.

Raw meaty bones are the foundation of a fresh, natural canine diet, delivering many health benefits. Bones are nutritional powerhouses. They are also “nature’s toothbrush”, with proven ability to remove dental calculus.

The benefits of bones for Boxer dogs include:

In the wild, wolves eat plenty of raw meaty bones. Throughout a million years of evolution prior to domestication, raw meaty bones were the food dogs thrived on.

Even kibble-fed dogs, or dogs eating a home cooked diet will derive enormous benefits from the additional of raw meaty bones.

(Cooked bones should never be fed. They are brittle and prone to splintering, which can cause gut perforations, and much of their nutritional value has been degraded and their enzymes destroyed by high heat.)

Nutritional Benefits Of Bones For Boxers

In his book Give Your Dog A Bone, the raw feeding pioneer and vet Dr Ian Billinghurst says, “if a dog is to become and remain healthy, its diet must be based on raw meaty bones”.

He says bones are so powerfully health-promoting that most dogs brim with health when fed raw meaty bones and little else.

(He starts puppies on ground chicken wings and chicken necks but says within 10 days pups can be given the wings whole.)

Most of the healthy dogs he’s known as a vet have been bone eaters. Most of the sick ones rarely or never ate bones.

He describes bones as “the only single food item that guarantees a dog will have excellent health”.

The beauty of the raw meaty bone is that the only things missing from the bone component (the amino acid methionine and some of the B vitamins) are contained in the meat portion, making the combination a complete food.

In 2016 researchers fed beef bones to a group of three-year-old Beagles and measured an 87 per cent reduction in dental calculus in just three weeks.

Owners of raw fed dogs report not only gleaming white teeth but also a total absence of bad breath, which is usually caused by rotting food stuck between the teeth.

All that gnawing and crunching of bone and ripping and tearing of cartilage, tendon and sinew is the canine equivalent of a thorough brushing and flossing.

Chomping on a bone is good for a carnivore’s mental health.

A study of captive cheetahs at the San Diego Wild Animal Park in 1990 videotaped feeding time, comparing the behavior of cheetahs fed a commercial diet and those given a natural diet.

They found that the cheetahs fed carcasses fed longer, spent more time smelling their food, chewed their food more, and used their molars to slice the food more.

Those behavioral observations indicated the natural diet was not only meeting nutritional needs and improving dental health but enhancing psychological wellbeing.

A Boxer that regularly gets to sink its teeth into a raw meaty bone is a contented Boxer. A satiated and happy dog is a well-behaved dog.

Bones are a fantastic way to channel a Boxer’s energy. A tasty bone will always trump chewing the leg of your favorite armchair, or any other kind of mischief.

Fermentation in the large intestine converts these animal products into short chain fatty acids, which improve the health of the cells that line the gut.

Note that raw fed dogs poop more slowly than kibble fed dogs. This is not constipation but normal.

Raw fed droppings are far less odorous and far less voluminous, due to the lack of poor quality ingredients, fillers and artificial additives and preservatives in raw, whole food.

Owners of raw fed dogs report their dogs remain naturally flea and tick free and have no need for chemical worming.

A healthy Boxer is less susceptible to disease all round.

Muscle Tone And Development In Puppies

In this way, meaty bones aid in the proper physical development of dogs.

Which Bones Should A Boxer Eat?

There are two types of bones in a raw canine diet:

Edible bone should form a daily part of a Boxer’s diet. This bone is entirely consumed.

Chicken carcasses are a cheap, readily available and highly digestible option. A dog’s stomach acid can break down every bone in a chicken’s body.

Their main purpose is the psychological satisfaction and dental health provided by the chewing action, although they obviously do provide additional nutrition.

How To Select The Best Bones For Boxers

Bones that are saw-cut and sold as “soup bones” are typically femurs.

These marrow bones, as they’re often called, also contain a lot of fat.

They’re softer and have lots of nooks and crevices that really give your Boxer’s teeth a good clean.

Lamb neck bones can be very fatty. Poultry shears make it simple to cut off the sheath of fat and any obvious veins of fat.

Another advantage to lamb necks is that these bones, by definition, come from young animals.

As a result these bones are softer. But also, the animal has had less time to accumulate and store toxins in its tissues, and so can’t pass them up the food chain to your dog.

What Size Bone Should You Give A Boxer Dog?

A common rule of thumb is to give a bone bigger than the dog’s head.

With Boxers’ big blocky heads, that’s easier said than done. Just make sure you give bones in as whole a form as possible, rather than sawed up.

Always supervise your Boxer when he’s eating a bone.

Get to know what kind of chewer he is. Is he a delicate eater? A gulper?

Be vigilant and remove the last bit of the bone before it gets small enough that your dog swallows it in one piece, rather than grinding it down.

You can hold onto the bone once it gets small, so you dog can have some more chew time but without the risk of swallowing a chunk of bone.

Practice a strong “give” or “drop it” command.

It helps to feed recreational bones after your Boxer has already had something to eat that day, so that your Boxer is less ravenous. This way your dog will be more likely to take his time, and eat carefully.

Apartment dwelling should not deprive a Boxer of bones.

Feed them inside on a towel or, better still, a mat with a tough waterproof cover.

Many dog beds come with a waterproof inner that is handy for bone eating. Afterwards, simply strip off the cover and throw into the wash.

Wipe your dog’s paws and jaws down with a warm wash cloth and you’re done!

Raw meaty bones are non-negotiable requirement for a healthy dog.

The benefits extend far beyond nutrition to dental health, psychological wellbeing and everything in between.

Can Boxers Be Born With A Bobtail?