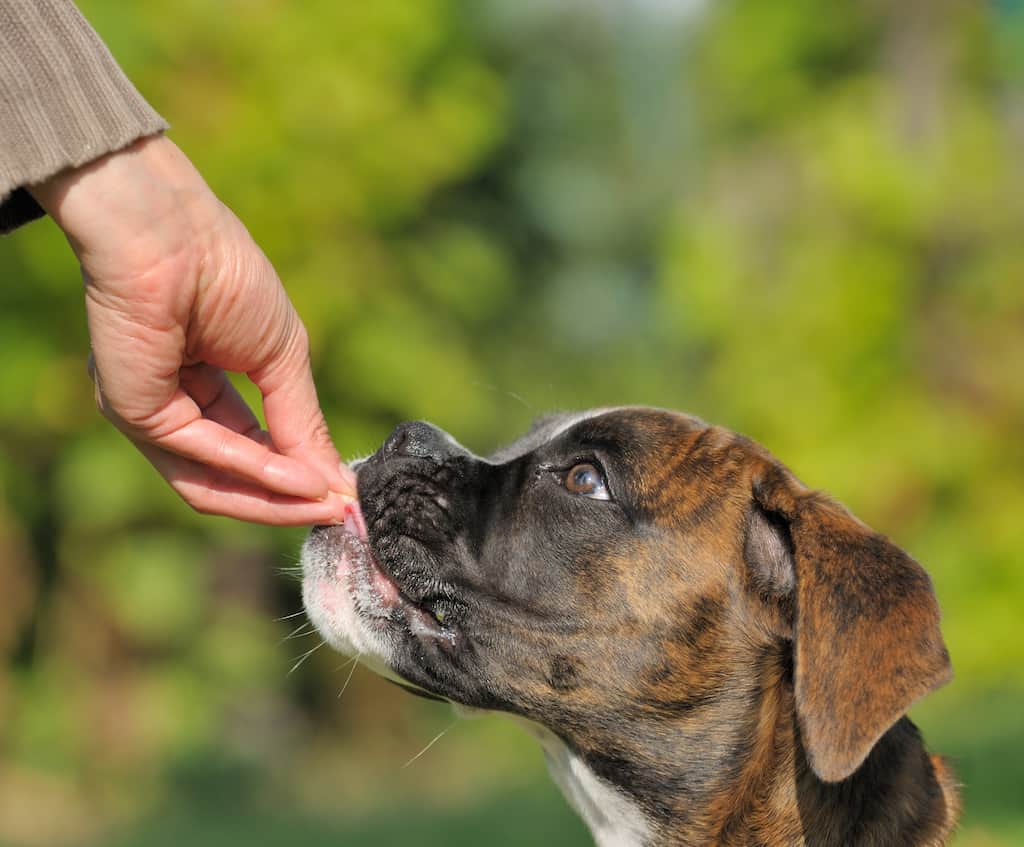 As a general rule, the occasional all natural treat derived from whole foods won’t do your Boxer any harm, but it’s best to avoid processed human foods.

A good guide for deciding whether a human food is appropriate for your Boxer is whether it’s something a dog would consume as part of a natural canine diet.

While you may be able to feed bread, cooked chicken or oats, for instance without your Boxer showing any obvious ill effects… none of these foods are required by a dog — or belong in an optimal canine diet.

Always make sure you are giving your Boxer a food because it offers benefits, and not for your own amusement or gratification.

Giving your Boxer some of your McDonald’s or a lick of your ice cream does him no favors.

I am not a vet. This article is intended for general informational and educational purposes only. I encourage readers to view my full disclaimer. Boxer Dog Diaries is reader powered. I may receive a small commission, at no extra cost to you, if you make a purchase via links I share. Thank you for your support.

Some owners find peanut butter smeared on a licking mat can provide distraction during tasks like nail grinding or baths.

It’s true that peanut butter seems appealing for its:

It’s very commonly believed to be fine for dogs.

However, peanut butter is a poor choice of treat for your Boxer.

The usual advice is it’s fine to feed your Boxer peanut butter as long as you check the label to make sure the brand you choose is single ingredient, containing 100% nuts and is xylitol-free.

Certainly, even trace amounts of xylitol can poison your Boxer, much smaller amounts than are required of chocolate.

However, the hazards of feeding peanut butter go far beyond xylitol.

Cancer In Boxers: 7 Ways Owners Can Lower The Risk
Help! My Boxer Has Allergies
Joint Problems In Boxers

What Brands Of Peanut Butter Are Safe For Boxer Dogs?

While some brands of peanut are xylitol-free, all brands are affected by the other problems outlined above.

Even making your own peanut butter at home will not spare your dog exposure to the glyphosate, lectins and other hazardous aspects of peanuts.

Whether peanut butter or something else, there are several problems associated with giving “human foods” to Boxer dogs:

How To Raw Feed Your Boxer
Most Pet Dogs Are Fat. Is Your Boxer One Of Them?

Next, we’ll deal with a few specific human foods and whether you should ever give them to your Boxer.

Lots of owners give cheese to their dogs as a training treat because dogs love the taste, and it’s convenient.

However, cheese really forms no part of a natural canine diet and your Boxer will be better off without it.

But there are far more species-appropriate sources of these nutrients for your Boxer.

Your dog will receive more than enough of them if you feed a raw meaty bone-based diet consisting of lean muscle meat, edible bone and a little offal (organ meat).

If you are bent on feeding your dog cheese, which cheese is best for Boxers?

Cottage cheese is perhaps the best choice as it’s lower than other cheeses in fat, sodium and lactose.

Lactose can be responsible for stomach upset in some dogs fed cheese.

Boiled chicken is often named as a good “bland diet” for a sick or recuperating dog.

It’s better than kibble, but that isn’t saying much.

Cooked chicken — like any other cooked meat — is inappropriate for your Boxer precisely because it’s cooked.

What To Do If Your Boxer Ate Something Bad

As demonstrated in a landmark, decade-long study known as Pottenger’s Cats, by Dr Francis Marion Pottenger in the 1930s, when a species is fed cooked food instead of its natural, raw diet, the health of the animal declines in every measurable way including:

Dr Pottenger studied 900 cats over nine generations, but his findings apply equally to dogs — or any species eating something other than its natural diet.

The doctor found by changing the diet back from cooked to raw food he was able to reverse most of the disease, up until the third generation.

Thereafter, much of the damage caused by misfeeding was permanent.

After the ninth generation of eating cooked food, Pottenger’s cats were completely sterile and stopped reproducing.

There is only one occasion on which you’d want to feed bread to your Boxer.

A slice of white bread can legitimately help clear a shard of cooked bone from your Boxer’s throat, if the situation should ever arise.

Remember to only ever give your Boxer bones that are raw.

Cooked bones are prone to splintering and can cause obstructions and perforations.

But, accidents happen and perhaps your Boxer got into the cooked chicken bones in the trash and now seems to have an irritation in his throat.

In this situation, just as for humans, a slice or two of white bread often does the trick.

Note, this remedy is for minor issues.

See your vet for anything more.

Oatmeal is is one of those things commonly fed to dogs and which won’t do any obvious immediate harm, but which is not super great for them.

Certain types of oatmeal contain ingredients unsuitable for dogs, but even the totally plain kind you make from scratch at home is not a wonderful idea.

Oatmeal contains some worthwhile nutrition but it’s high in carbohydrates when a natural canine diet is low in carbs.

It’s often touted as a source of fiber, but for dogs, bones, with their associated collagen and cartilage provide species-appropriate fiber and play the role that plant-based fiber and roughage does in the human diet.

These animal products are fermented in the large intestine, creating short chain fatty acids that are beneficial for the cells lining the gut.

How To Feed Bones To Your Boxer

As with cheese, there are more biologically-appropriate ways to provide the same nutrients to a dog.

Is Honey Good For Boxer Dogs?

Raw honey, particularly from local sources, can be beneficial for your Boxer to consume in small amounts.

Honey contains pre and probiotics and so may aid digestion and there is some thought by exposing your dog to pollen, it may protect against the development of environmental allergies.

Honey can also be applied topically to wounds or skin irritations in preference to pharmaceuticals for its antibacterial, antifungal and antiviral properties.

Make sure you get pure, raw, unfiltered honey so that it doesn’t contain pesticides and actually contains real honey — many supermarket brands don’t.

A word of caution: raw honey contains clostridium botulinum spores and should not be given to puppies under one year, when their immune systems are still developing.

Many raw feeders give small amounts of garlic for benefits they believe include flea and tick repellence.

It may also repel mosquitos which are how heartworm is transmitted to your Boxer.

Garlic is not something a dog would naturally consume, however.

Here at Boxer Dog Diaries we tend to favor getting the basics of dog husbandry right (in terms of feeding a fresh, raw meaty bone-based diet and avoiding chemical ingestion and exposure), rather than adding in a whole heap of extras that wouldn’t figure in a natural canine diet.

We mention garlic in case you think it may be right for your Boxer and you’d like to investigate further.

If you’re going to include garlic in your Boxer’s diet you need to feed it in very small amounts to avoid toxicity, and only to dogs with a fully healthy digestive function.

Worms & Your Boxer: What You Don’t Know
Safer Flea Protection

There are those that believe apple cider vinegar can cure all sorts of ailments, internal and external.

UTIs, gut issues, heart health, cognitive problems and infections are among the problems people use ACV to treat.

A 50/50 mixture of apple cider vinegar and water sprayed on the coat may help repel fleas and ticks before an outing.

In no way do we believe it’s necessary for a healthy Boxer, but you may be interested to research it for yourself.

The mother is the bacteria and yeast used to ferment the apple cider into vinegar, drifts near the bottom of the bottle and makes the liquid cloudy.

Can I Give My Boxer Puppy Milk?

Milk of any species other than dog is an unnatural food for your Boxer.

Your Boxer has no biological requirement for milk once he’s been weaned.

If you are giving your Boxer milk anyway, goat’s milk may be the better choice.

However, it’s recommended to avoid all dairy if your Boxer has skin problems or digestive issues, cancer or pancreatitis.

Should I Give My Boxer Yogurt?

Many owners give yogurt for conditions like acid reflux and other digestive problems.

Boxer Licking The Air? It Could Be Acid Reflux

The thinking is its live cultures of bacteria may help restore gut health.

In the wild dogs do this naturally by eating poop, which you may have seen your Boxer do.

Of course, yogurt, as a processed manmade dairy product, is not an element of a natural canine diet.

If you can get your hands on it, a more biologically appropriate way to replenish your Boxer’s gut microbiome is green tripe, which is the stomach lining of ungulates like sheep and cows.

It’s important to only give the “green” type of tripe, which means it’s unbleached and non-chemically treated.

How To Feed Human Foods To Your Boxer Dog

The very best way to feed your Boxer is to get the basic elements of a raw meaty bone-based diet spot on.

This way you will be much less likely to need to resort to other types of non-biologically appropriate foods as “remedies” for health problems.

If you are going to feed human foods to your Boxer, it’s a good idea to:

Why Do Boxers Get Hives?

More Information On How To Feed Your Boxer Dog Properly

On the plus side:

5 Rules For (Safely) Feeding Fish To Your Boxer

Fruits your Boxer can happily eat include:

Peanut butter might be the most common, but there is no end to the human foods that owners feed to their Boxers in the belief they supply some benefits.

If you are considering feeding something that falls outside the bounds of a natural canine diet — in other words, if it’s not raw meaty bones, lean muscle meat, offal or fruit — make sure you do your due diligence and satisfy yourself it’s a justified inclusion.

Duker Freuman, Tamara, Goats Milk: Is This the Right Milk for You? Healthline, 2019