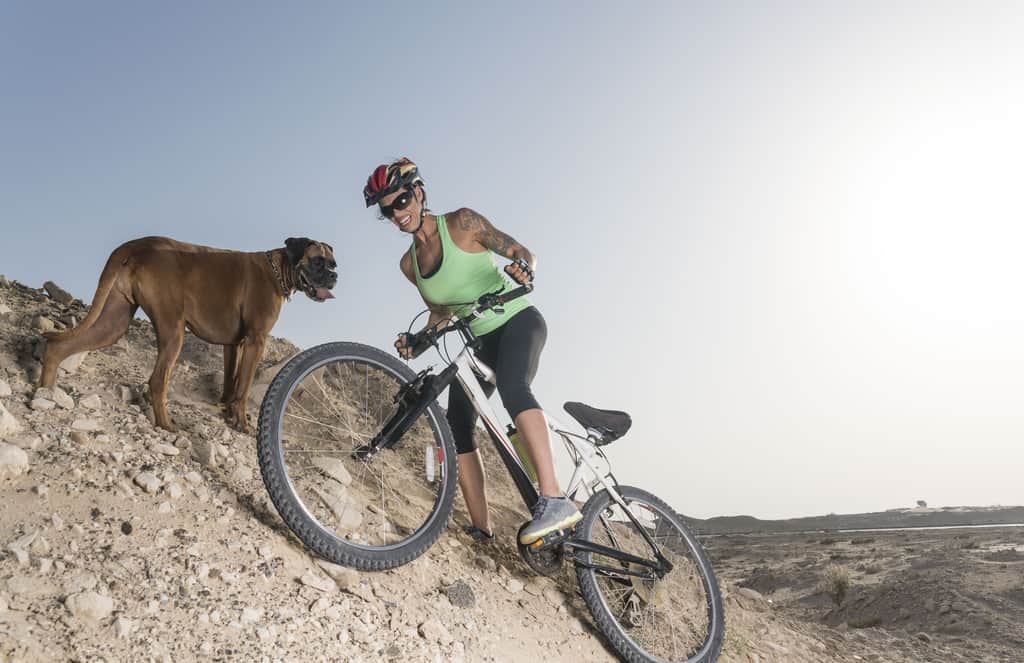 Boxers love to run and will rarely say no to any invitation, but there are a few things to keep in mind before taking yours jogging or biking.

The two big risks associated with going running with your Boxer are joint damage if you run your dog when he’s too young, and heat exhaustion.

A third danger is bloat, which is deadly and can happen if you exercise your dog vigorously too close to mealtimes.

You’ll also want to be mindful of the surfaces you run your dog on, to avoid injuring his paw pads.

The most important thing to know is that Boxers shouldn’t be taken running until they’re finished growing.

This is because the jarring, repetitive action can damage their still-forming joints.

You won’t notice your pup limping at the time. The effects show up years later in the form of joint problems like arthritis in mid life and onwards.

Keep in mind that your Boxer might look fully grown, but Boxers are a slow maturing breed and aren’t considered out of puppyhood until the age of two or even three years old.

Although you’ll want to bring your Boxer everywhere with you, cool your heels for those first few years and you’ll spare your dog pain and mobility issues as an adult.

To protect your Boxer’s joints, restrict exercise during puppyhood.

Even long walks are best avoided.

Instead, opt for short walks, training sessions and plenty of playtime on soft surfaces like grass or sand.

This benefits of this kind of exercise are:

It’s also more interactive, and a chance to bond with your pup.

Swimming is another great low-impact form of exercise that’s gentle on joints.

Even as an adult, do your best to minimize time spent on hard surfaces like concrete or asphalt — definitely save running and jumping for the park or beach.

When you throw the ball or frisbee for your dog, keep jumps long and low to the ground. No acrobatics high in the air, which might be crowd pleasing but predispose your dog to heavy landings.

Did you know very young Boxer puppies can develop growth abnormalities from being raised on hard, slippery surfaces like tiles or concrete? It’s called knuckling and can usually be corrected by putting down mats that offer more cushioning and grip.

2. Boxers Are Prone To Heat Exhaustion

All the same nasal structures are squished into a much more compact space, which can make breathing difficult when it’s hot. And since panting is how dogs cool off, heat stress can quickly develop.

The risk of heat exhaustion and breathing difficulties is highest during prolonged exertion and in hot or humid weather. A combination of the two can be a recipe for disaster.

Here are some strategies for avoiding heat stress when jogging (or walking) with your Boxer:

Check out more tips for keeping a Boxer cool.

3. Bloat Can Be Caused By Eating Close To Exercise

No discussion of Boxers and exercise would be complete without mentioning the importance of not running within a few hours of eating, both before and especially after.

Strenuous physical activity close to eating has been associated with an increased risk of bloat or gastric dilatation-volvulus.

This is an emergency condition where the stomach fills with fast and twists on itself, cutting off blood supply to vital organs.

Without prompt veterinary intervention, it can be fatal within hours.

Deep-chested breeds like the Boxer are more susceptible to bloat.

Other risk factors include: eating kibble, eating one large meal per day, eating rapidly (use a slow feeder) and eating from raised food bowls (always feed from a floor-level bowl).

Guzzling large amounts of water is also a bloat risk.

Rest your dog for several hours after eating, preferably for the rest of the day. A gentle walk is fine.

While it’s most important not to eat before exercise, it’s also a good idea not to feed straight afterwards.

Give your dog a chance to cool off and have a snooze for at least an hour, ideally a few, before eating dinner.

To learn more, see our detailed article on bloat.

4. Running On Cement Can Hurt Your Boxer’s Paws

Paw pads are just skin, albeit a little thicker.

Beware how scalding the bitumen road and cement sidewalk can get on a hot day and don’t make your dog walk on these surfaces.

Don’t be tempted to run your dog on concrete as a nail file. This is rough on your pup’s joints and his paw pads and will create more problems than it solves.

5. Mental Activity Will Tire Your Boxer Out Faster Than Physical Exercise

On a hot day, don’t be afraid to take a few quick bathroom breaks outside but hole up in the air con with your pup.

It’s preferable to skip a day’s exercise rather than push it when the weather’s oppressive.

Work on some training, teach your dog some tricks (here are 5 that come naturally to Boxers) or play a game of find it indoors.

Getting your dog to use his brain to problem solve will actually tire him out faster than pure physical activity.

Anyone who’s witnessed the zoomies knows the answer to this question is yes.

Short sharp bursts of speed are a Boxer’s specialty.

Boxers were historically used as hunting dogs to catch and hold down wild bear and boar, so they have the capacity for endurance.

Every Boxer is different, so tailor activities to your dog’s particular capabilities and preferences.

Pay attention, too, to how your Boxer is feeling from day to day and let him determine his activity levels.

Training Your Boxer To Run With You

An out of control Boxer can get you both into trouble, so make sure you start slow and teach your dog to match your pace.

It’s critical your dog remains to the side, and doesn’t veer in front of you to create a tripping hazard.

We are reader supported. As an Amazon Associate we earn a commission from qualifying purchases.

A Hands Free Dog Leash may come in handy.

If you’re running with your dog at night, when it’s cooler, consider a LED Collar Light for visibility.

Make sure not to run your dog in a head halter, but ideally a harness which puts less strain on his head and neck.

Check out how to choose the right harness for your Boxer.

Before recruiting your newest jogging partner, wait until your Boxer is at least two years old so that he doesn’t damage his joints.

With an adult Boxer, run only in cool temperatures and when your dog has an empty stomach.

Avoid running on hard pavements or hot bitumen and don’t hesitate to replace a job with some indoor activities when it’s just too hot for a Boxer.