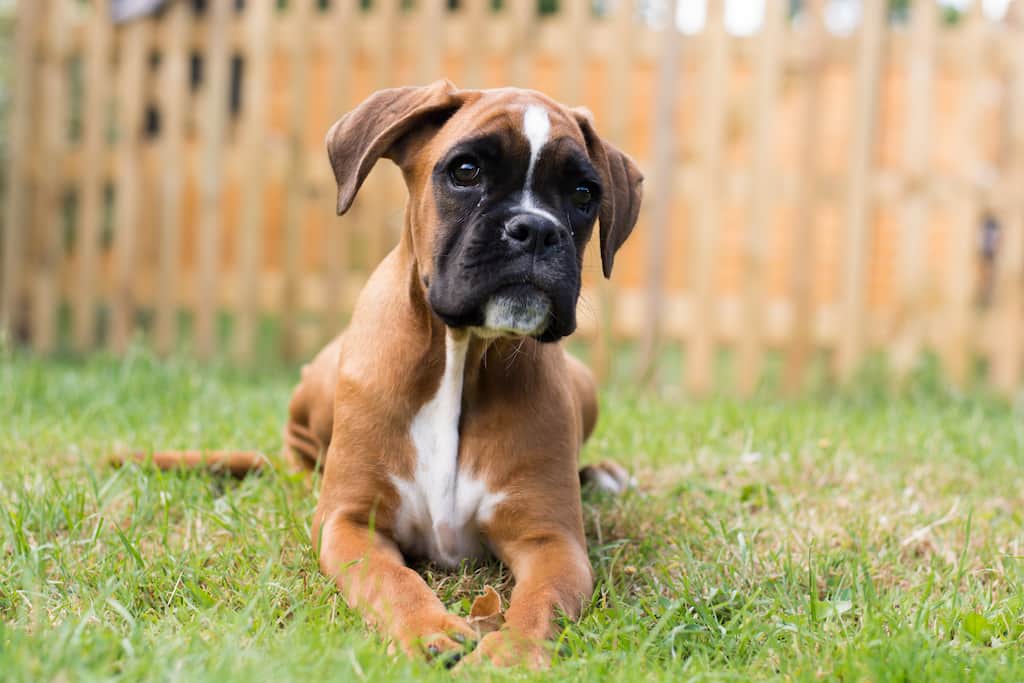 Owners frequently suggest Benadryl to each other for their Boxers, and many vets are willing to recommend this over-the-counter drug for allergy-like symptoms.

Despite its availability and popularity, Benadryl is not a medication you should give to your Boxer lightly — or in lieu of addressing the underlying cause of the hives or the itching.

I am not a vet. This post is intended for general educational and informational purposes. I encourage readers to view my full disclaimer.

What Is Benadryl For Boxer Dogs?

Benadryl is the brand name of the drug diphenhydramine hydrochloride, invented by the company that’s now part of Pfizer, and approved as the first prescription antihistamine in the 1940s.

Antihistamines counteract histamines, natural body chemicals involved in many processes including the dilation of blood vessels as part of an immune response to pathogens.

An over-release of histamine is associated with allergic reactions that may damage capillaries and allow blood plasma to leak into tissues, creating inflammation and itch.

Benadryl was designed for use in people but is now frequently given to dogs.

You may have encountered it as Vetadryl, a liver flavored version for pets.

As well as being an antihistamine, Benadryl has other effects including sedation.

It is given to dogs for just about anything from allergies and anxiety to motion sickness and as an antidote to adverse vaccine reactions.

Can You Give A Boxer Dog Benadryl?

Ask your conventionally-trained vet whether you can give Benadryl to your Boxer and the answer is bound to be yes.

Benadryl is often the gateway drug to a slew of “allergy” meds encompassing immunosuppressant steroid injections or prednisone tablets, regular Cytopoint shots and ofen culminating in Apoquel, a drug that comes with an increased risk of tumors and which many owners find involves a nasty detox if you ever try to discontinue it.

Note that none of these “treatments” address — or even try to identify — the underlying cause of the dog’s symptoms.

They suppress or mask symptoms, in some cases.

When you give these drugs you may achieve temporary relief, but you are no further advanced in solving the root cause of your dog’s problem.

So, while you can give your Boxer Benadryl, whether it’s a good idea is a different question.

Is Benadryl Safe For Boxer Dogs?

However, if you are looking for a safer, lasting solution to your Boxer’s allergies or other symptoms, you may wish to look deeper than the quick fix that is Benadryl.

What Can I Give My Boxer For Allergies Instead Of Benadryl?

Rather than medicate your Boxer in a bid to cover up symptoms, it’s best to identify the cause of those symptoms.

Likely culprits, often in combination, are:

Natural Alternatives To Benadryl For Boxers

As well as identifying and removing the cause of your Boxer’s symptoms, there are a number of things you can do instead of giving your Boxer a drug like Benadryl.

Safer options that can benefit your Boxer include:

Regardless of your Boxer’s issue, fix the basics first and see if you actually have a problem.

There is every chance the symptoms that are being attributed to “allergies” may actually be a normal reaction to poor diet or other mistakes in basic dog husbandry.

These mistakes are all too easy to make, as so many of the practices that are normalized as part of modern dog ownership run counter to your Boxer’s health.

What Benadryl Is Safe for Dogs?

If you are going to give Benadryl to your Boxer, it’s best to use a formula that’s specifically intended for dogs.

Many owners use a human product bought at the pharmacy.

If you’re doing this, it’s imperative that you check the label and make sure you get a product that contains only diphenhydramine and no other active ingredients.

Some cautions if using Benadryl with your Boxer include:

What Does Benadryl Treat In Boxer Dogs?

For better or worse, owners most commonly give their Boxers Benadryl for:

Side Effects Of Benadryl For Boxer Dogs

Like any drug, Benadryl comes with a range of side effects, some mild and others severe.

Common, mild side effects of Benadryl in Boxer dogs include:

But Benadryl’s side effects in dogs can be even more serious.

Antihistamines cross the blood brain barrier and, as a result, can cause significant suppression of the central nervous system and toxicity, which can result in impaired movement, coma and even death.

Other possible adverse effects of Benadryl on your Boxer include:

Note that Boxers are a breed that tends to have a sensitivity to drugs e.g. the common veterinary sedative Acepromazine which is one reason they benefit so much from natural rearing practices.

It’s important to observe your Boxer closely if you do give him Benadryl, to make sure he doesn’t suffer an allergic reaction to the drug itself.

It can become complicated, as signs your Boxer is allergic to Benadryl include many of the symptoms for which you may have given the Benadryl in the first place such as:

These reactions will ordinarily show themselves within an hour of receiving the drug.

Benadryl Dosage For A Boxer Dog

Dogs metabolize Benadryl differently to people, so if you’ve bought medication intended for humans, the dosage guidelines on the packet don’t apply.

According to the Merck Veterinary Manual, the canine dosage of Benadryl is about 1mg per pound (2-4mg per kilogram).

Never try to guess how much to give.

This is one situation where you need to ask your vet.

If Benadryl is working for your Boxer, it’s said to begin reducing symptoms of something like skin rashes within about an hour.

If your Boxer is having an adverse reaction to the Benadryl, its effects should wear off after 24 hours.

Beware that Benadryl has a narrow safety margin, which means it’s easy to give too much.

Signs of Benadryl overdose include:

These symptoms can progress to:

Contact your vet immediately for emergency treatment if you suspect Benadryl overdose.

How Often Can I Give My Boxer Dog Benadryl?

The Merck Manual says the above dosage of Benadryl can be administered two to three times per day i.e. every eight to 12 hours.

Benadryl should only ever be used for the shortest possible duration.

If your vet suggests keeping your Boxer on Benadryl long term, run a mile.

Many of the worst adverse consequences of Benadryl arise from extended use.

Hopefully you can find a good holistic vet who has a more extensive array of tools in her kit bag and is less likely to automatically reach for drugs as a first resort.

If there are no holistic vets in your area, some offer telehealth consults long distance.

Other Drugs Sometimes Given Instead Of Benadryl

Other drugs sometimes given in place of Benadryl include:

Beware that these drugs are often combined with decongestants that are dangerous for dogs.

When Benadryl May Not Be Enough

For acute allergic reactions involving swelling that may threaten the airway, faster acting drugs that begin to work within minutes, like a steroid shot, may be necessary.

Steroids are best reserved for emergencies and used for the shortest possible duration, given the damaging effects these immunosuppressant drugs can have on your Boxer’s overall health.

Before you reach for Benadryl to deal with your Boxer’s symptoms, try getting to the bottom of what’s causing the problem.

Far better to identify and remove the root cause than to medicate your dog while the underlying issue persists.

The kinds of symptoms typically suppressed with Benadryl can usually be resolved once and for all with proper diet and care.

Henriques, Julia, Benadryl: Not As Safe For Dogs As You Think, Dogs Naturally Magazine, 2021