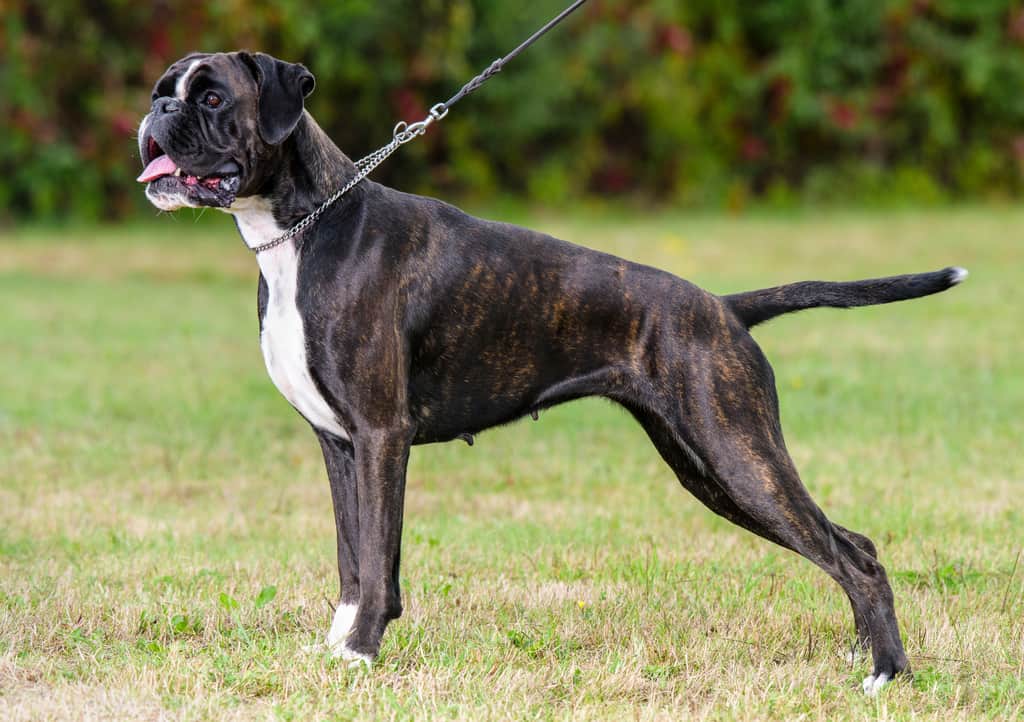 Can you tell whether the Boxer in the photograph is from European or American bloodlines? Or perhaps it’s a UK Boxer?

In general, American Boxers are more slender and fine boned, whereas their European counterparts are stockier and heavier in the front quarters.

There can also be differences in temperament.

British (and Australian) Boxers tend to fall somewhere in between the two extremes.

Boxer Breed Types: Is There Really More Than One Style Of Boxer?

Just as culture varies from place to place, each country tends to favor a certain look in their Boxers.

There is only one Boxer breed, but there are five breed standards guiding breeders in different parts of the world.

Notwithstanding a few variations, the standards enshrine essentially the same physical traits as desirable and regard the same qualities as defining the Boxer breed.

Top quality Boxer specimens, regardless of country of origin, are much more similar than they are different.

But as far as the average pet Boxer in each country goes, there do tend to be slight variations between Boxers from Europe and Boxers from the US… UK and Aussie Boxers are subtly different again.

These differences are partly due to the fact that interpretations of the breed standard are, inevitably, subjective and shaped by local factors including culture.

Another influence on how Boxers are bred is the purpose for which the dogs are predominantly used.

In Germany, Boxers evolved as working dogs originally bred by hunters who trained them to pursue and hold down quarry like bears and boars.

The demands of this job made “function” paramount and “form”, or appearance, secondary.

What mattered most was the muscle, jaw shape, fitness and temperament to perform these highly physical and dangerous tasks.

In the United States, Boxers have been used as guard and working dogs, but are mostly companion (pet) dogs.

This has meant that in the US, performance in the show ring has taken precedence in shaping which characteristics are selected for by American breeders.

“Conformation” or appearance has been the primary driver of breeders’ choices.

Some believe this has seen form override function in American Boxers.

The suggestion is these dogs look sleek and elegant, but may lack the power and muscle cultivated in European Boxers.

All of which is to say nothing of the influence of pet owners breeding their own Boxers, using highly variable criteria and often with little attention to upholding any particular look, temperament or breed standard (and potentially without any health testing for heritable diseases).

Should you breed your Boxer? Things to consider first.

Looking for a Boxer breeder? 24 must-know questions to ask.

The History Of The Boxer Dog

Yes, they can be.

While American Boxers are often slightly taller, European Boxers tend to be more muscled and to have heavier body weights at maturity.

How Big Do American Boxers Get?

The North American Boxer standard says males should be 23 to 25 inches at the withers (highest point of the back) and females 21.5 to 23.5 inches.

The European standard calls for Boxers to be slightly shorter, with males 22.5 to 24.8 inches while females are 21 to 23.2 inches.

Factors like nutrition and neutering also affect how a dog develops.

Neutering before two years old is known to delay closure of the bone plates, prolonging the growth phase and producing an unnaturally tall dog with distorted anatomical proportions (and a predisposition to joint problems later in life).

What Happens When You Neuter/Spay A Boxer

The US standard includes no weight guidelines.

Weight is specified in Europe as more than 66 pounds (30kg) for males and about 55 pounds (25kg) for females.

Whether individual dogs become aggressive is mostly determined by the way they are treated, trained and raised.

However, there is some thought that European Boxers can have more aggressive tendencies, as a result of being bred as working, hunting dogs.

Traits Of The European Boxer

Though this is far from agreed by all breeders and Boxer fanciers, European Boxers are generally ascribed the following traits:

Note, very occasional long haired or “fuzzy” Boxers are a phenomenon all of their own, though to arise from a mutation of the FGF5 gene that is known to produce the odd long haired pup in normally short haired breeds.

American Boxers are usually distinguished from Euros in the following ways:

Features Of The UK Boxer

English (and Australian) Boxers are said to combine qualities of both American and Euro Boxers, resulting in a more “middle of the road” dog displaying:

Though it’s a controversial topic, there is some suggestion that health problems are more common in American lines of Boxers.

Certainly, many factors other than genes influence the health and lifespan of a Boxer.

Just as the Standard American Diet is recognized as to blame for a lot of health problems in humans, the widespread feeding of kibble and other highly processed dog foods in the United States arguably arguably explains much of the disease riddling the pet dog population as a whole, including Boxers.

How Long Does A Boxer Live?

It’s also true that any reduction in genetic diversity in a population, of any species, tends to lead to health problems.

This is due to the effect of recessive genes that would otherwise not find expression if the gene pool was larger.

Genetic diversity is reduced by inbreeding, or line breeding, where the same few, related dogs are constantly bred back with each other.

These practices are a pretty universal part of breeding, used to concentrate desirable genes, creating the homogeneity that defines a breed.

Whether Boxers are European or American, or British/Australian, it’s best for the health of the dogs to incorporate breeding between bloodlines to create what’s known as “hybrid vigor”, the protective effect of genetic diversity.

Hybrid vigor is why “mongrel” dogs are often naturally healthier than purebred ones.

On one hand, breeders seek to maintain the integrity of their bloodlines by inbreeding to eliminate undesirable genes and duplicate desirable ones.

Desirability in breeding terms usually refers not so much to health attributes as to how closely the dogs conform to the breed standard in body structure and appearance.

On the other hand, you have the long term health and vitality of the breed as a whole.

The ideal is to conserve “good” genes that produce the classic Boxer characteristics, but to do so using as rich and assorted a gene pool as possible.

This requires breeders dedicated to the improvement of the breed and willing to take a long view, rather than chasing immediate success in shows through the production of consistently physically similar dogs, at the expense of health.

Even maintaining differences between European, American and British Boxers, to an extent, reduces the gene pool of each type.

Most breeders see the pursuit of distinctly different looks or any kind of deliberate separation between the styles of Boxer as antithetical to the overall welfare of the breed.

In this way, there is value in careful breeding of American Boxers with European ones, to refresh the gene pool and combine the most desirable characteristics of each.

Indeed, many dogs have both American and European heritage and there are Boxers with a mix of all three types in their bloodlines.

Are American Boxers Harder To Train Than Euro Boxers?

Temperament, intelligence and trainability are in-built qualities of Boxers, prioritized by breeders everywhere.

However, according to Von Aztlan Box Kennel, California-based breeders of full European Boxers, the differences between bloodlines extend beyond physical traits to mental ones.

American Boxers, they say, are equally as smart but tend to be less focused, less driven and more easily distracted.

It’s easy to identify major differences between a German Boxer trained as a police dog, say, and a “hyperactive” pet Boxer in an American household.

Most of this is a result of environment and training.

But maybe, just maybe, genetics could be playing a role.

So, what type is the dog in the picture at the top of this article?

She has the short muzzle typical of European Boxers and the sloping topline, but she isn’t overly muscled or heavily set.

She’s young, so this could come later.

Trying to tell a Boxer’s lineage by examining the dog at any moment in time is a bit of a guessing game.

Perhaps a professional eye could decipher it, but for the rest of us?

Your guess is as good as mine.

Often the easiest way to tell where the dog is from is whether she has a docked tail (this is forbidden in Germany but still written into the standard in the US) or cropped ears (much more common in the US than elsewhere in the world).

Internationally, natural ears are increasingly the norm, as unnecessary surgical alteration is shunned more and more — and even made illegal on animal cruelty grounds.

However, since an owner in the US can have a pure German Boxer and one in Europe can have an American Boxer, what’s been done to tail and ears might only reflect where the dog has been raised, without telling you anything about her genetics.

What Do You Want To Know More About?

The American Boxer? A Discussion of Standards, Newcastle Boxers