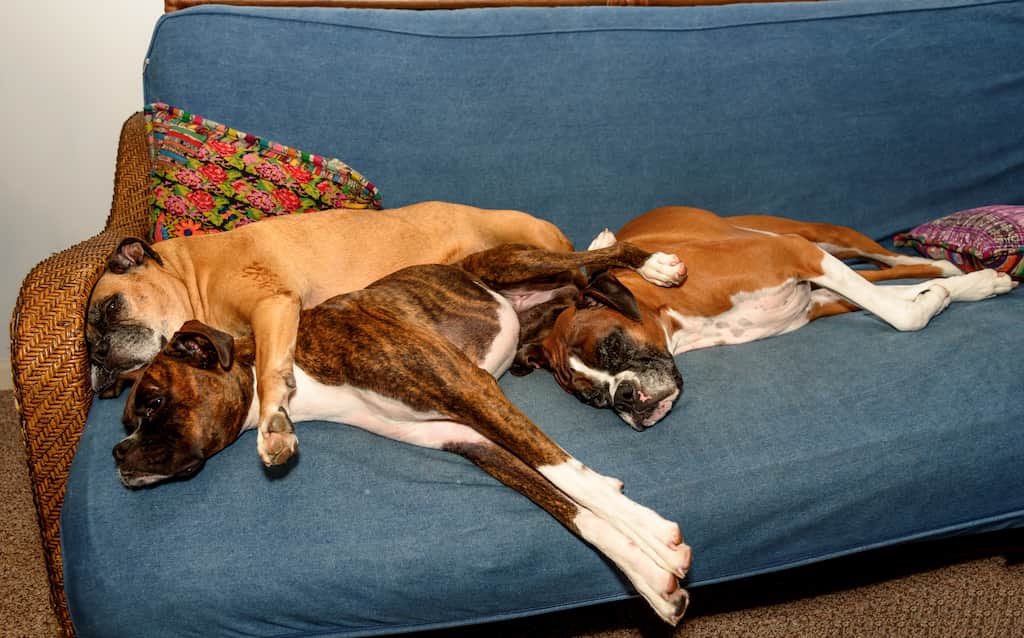 How much sleep a Boxer dog needs depends on factors including their age, activity levels and health.

A Boxer will generally sleep about half the day in total, dozing whenever there is a lull in activity.

Your Boxer’s sleep habits, like his bowel and urinary habits, are worth keeping an eye on as they can provide clues as to his general health and wellbeing.

How Many Hours Does A Boxer Dog Sleep?

A healthy adult Boxer will usually sleep about 12 to 14 hours a day.

Your Boxer won’t get all his sleep in one stretch, like humans.

Dogs are opportunistic sleepers, and dozers.

Your Boxer will sleep most soundly at night, when there is no noise or distractions.

But he will also sleep during the day when you’re out or whenever there’s nothing interesting going on.

If your Boxer isn’t sleeping well, or is restless or continually waking up it could indicate:

If your Boxer is sleeping much more than usual it can also be a sign of:

You can help your Boxer sleep well by establishing and maintaining a regular sleep routine.

It’s a good idea to:

Do Boxer Puppies Sleep A Lot?

Your Boxer puppy will, of course, need to sleep a lot more when he’s little.

When he first comes home, probably at eight weeks, he will probably sleep as much as 18 to 20 hours per day.

Life will be a cycle of sleep, potty, eat, potty, play, potty.

Daytime naps may be half an hour or as long as two hours at a stretch.

It can be tempting to constantly interact with and handle your pup, but it’s important to leave him undisturbed so he learns to settle down and rest on his own.

Just like children, overtired puppies can get out of hand, so recognize the signs and encourage a time out.

Should A New Boxer Puppy Sleep Through The Night?

You might get lucky and find your Boxer pup sleeps right through the first night.

Resist the urge to bring him in bed with you, if that’s not where you want him to remain once he’s fully grown.

It’s far easier to allow your Boxer in your bed for the first time as an adult, if you want to go that way, than to try to oust him once he’s already accustomed to sleeping in the big bed.

Your Boxer may whine and cry in his crate because he’s getting used to it — ignore these complaints but learn to recognize the difference between that and him needing to go potty.

If your pup does need to go potty during the night, attend to him as uneventfully as possible, praising him calmly for going outside, but without throwing in any extra attention or a midnight play session.

Should Your Boxer Puppy Sleep In A Crate?

There is no reason your Boxer must sleep in a crate, though it’s quite popular in the US.

It can certainly be useful for your Boxer to at least be comfortable with a crate, so that if he ever has to stay in one at the vet’s, it’s more familiar.

But, if you’re able to Boxer proof your house by closing doors, keeping power cords and other potentially hazardous objects off the floor and using baby gates etc, you may not need to crate train.

One thing’s for sure: if you intend to crate train your Boxer, start on day one.

This goes for all house rules, like whether dogs are allowed on the couch, and whether they are required to wait for humans to go through doors first when exiting the house.

Decide early what they are, and stick to them — no exceptions, they’ll only confuse your Boxer and create headaches for you later.

Should You Let Your Boxer Sleep In Your Bed?

There are plenty of good reasons not to have your Boxer sleep in your bed with you, such as:

It comes down to personal choice.

They aren’t like greyhounds that can happily lounge around all day, every day.

But they do enjoy a snooze as much as the next canine.

Your Boxer will happily chill out once he’s had his daily exercise and a chance to get his wriggles out.

Why Do Boxers Sleep On Their Backs?

Boxer dogs have a range of quirky behaviors, including entertaining sleeping positions.

Sooner or later you will see your Boxer sleeping on his back, with all four legs splayed in the air.

This sleeping posture may indicate your Boxer has had a hearty meal and is feeling full and contented.

Or it might be more practical: a way of ventilating the skin and getting rid of excess body heat, the opposite of curling in a ball when it’s cold.

Why Does My Boxer Twitch In His Sleep?

If you notice your Boxer twitching, yelping, growling under his breath and even breathing heavily in his sleep, don’t worry.

Judging by the sleep barking and running, Boxer dog dreams are as exuberant as their waking lives.

Your Boxer’s sleep needs will vary over his lifetime, depending on what’s going on, just like yours.

In general, though, you will get to know your dog’s sleep patterns, and what’s normal for him.

Pay attention if you notice any change to your Boxer’s sleep schedule as it may be a subtle indication that something is amiss.