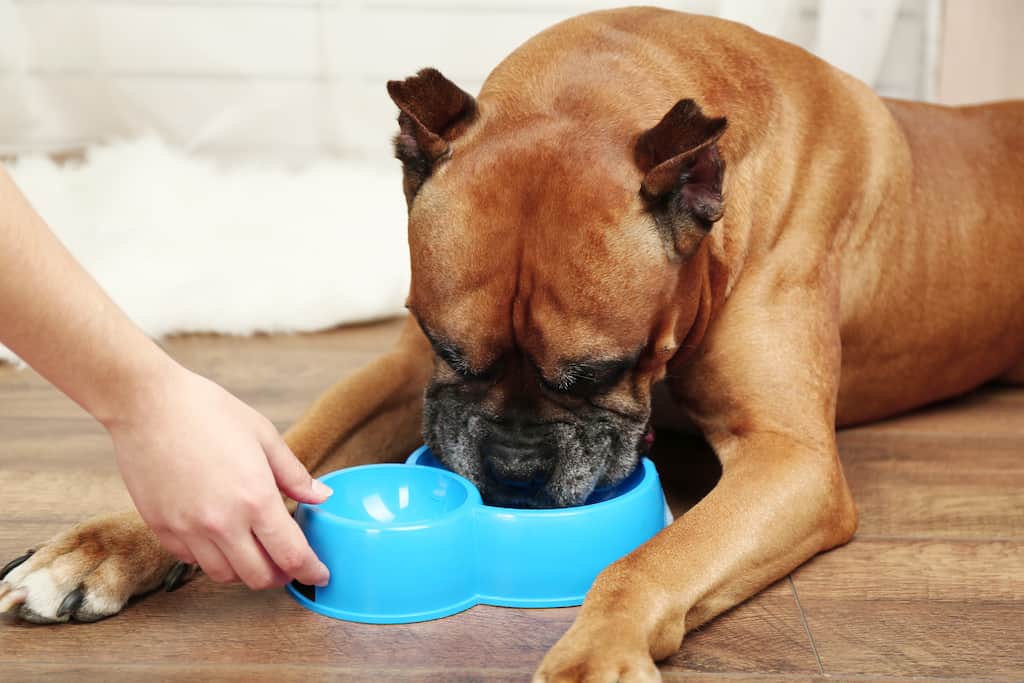 A homemade diet is much better for your Boxer than store-bought dog food — but it must be done properly.

The best home-prepared food for Boxers is a raw diet, which offers numerous health benefits compared to cooking your Boxer’s food.

Making your Boxer’s food yourself doesn’t require any complex recipes and is relatively straightforward once you understand the basics of canine nutrition.

Feeding your Boxer a homemade diet avoids many of the problems associated with store-bought dog food.

Kibble exposes your Boxer to:

Canned, wet dog food shares many of the same shortcomings.

Pre-made raw dog food is a step up, but still makes a number of mistakes that you can avoid if you home prepare your Boxer’s food.

The number one mistake made by owners who feed their Boxers a home cooked diet is right there in the name — the food is cooked.

While cooking for your Boxer at least eliminates some of the issues associated with commercially-manufactured dog food, and gives you more control over what’s in it, home cooking your Boxer’s food recreates one of the biggest problems associated with kibble: the food is cooked, when a dog is designed to eat raw food.

Despite the normalization — and monetization — of feeding cooked food to modern pet dogs, the simple, biological fact is that cooked meat is entirely inappropriate for dogs.

Dogs are versatile, opportunistic feeders and they have adapted to eating cook food as a result of their association with man.

They’ve also developed a heap of health problems since domestication, diseases not seen in wild dogs and which echo the conditions seen in people.

The canine digestive system is designed to thrive on a fresh, raw meaty bone-based diet.

This is what dogs have eaten for over a million years throughout their evolution.

The moment you cook meat, and fail to feed raw meaty bones — two mistakes that usually go together — you’ve departed from your Boxer’s ideal diet.

Your dog is a carnivore, yes.

But that doesn’t just mean he needs to eat meat.

The meat needs to be in a biologically-appropriate form.

Why You Should Not Cook Your Boxer’s Food

It should be enough of a red flag to know that cooked food in no way resembles a natural canine diet.

To break it down even further, home cooked food is inappropriate for your Boxer because:

Cooked bones should never be fed to dogs as they are likely to cause gut perforations and bowel obstructions.

Raw meaty bones, however, are the single most crucial part of the canine diet.

They are typically not given to Boxers eating home cooked diets, a glaring error that exacts a heavy toll on a Boxer’s health.

If you only do one thing to improve your Boxer’s diet, feed him plenty of raw meaty bones.

Here is a guide that explains how to choose the best raw meaty bones for your Boxer.

Cooking changes the composition of food.

Heat removes much of the nutritional value and cooks away the magic health-promoting factors contained within raw or “living” food, such as enzymes.

You might have heard that cooking makes food more digestible for dogs.

According to well-known integrative veterinarian Dr Karen Becker, this is true of ingredients like soy, corn (both of which are biologically-inappropriate for dogs) and sub-standard protein sources like rendered meat by-products.

Hopefully you are not feeding any of these things.

As for quality cuts of lean meat, Dr Becker says:

“Denaturation makes these once healthy proteins more difficult for your dog (or cat) to digest and assimilate.”

Recipes are a human invention that distort the way dogs are meant to eat.

In other words, they eat one thing at a time — usually a whole prey animal.

They do not mix in fruit and other plant matter with the animal protein.

Yes, dogs may consume some of the pre-digested grass contained in the stomach contents of the prey animal.

Yes, Boxers can eat a wide range of fruits and that’s entirely appropriate.

But, in natural settings, wolves and other relatives of the domestic dog always eat fruit and other plant matter separately to meat.

Dogs are what’s known as “facultative” carnivores, which means their primary food is meat, but they can sustain themselves on a secondary food when necessary.

So, include fruit in your Boxer’s home-prepared diet.

But make sure you always feed it separately to the meat meals.

Note: If your Boxer is eating grass it may be for reasons that have nothing to do with nutrition, such as scent-cloaking.

This is an ancient instinctual behavior related to the dog’s origins as a stealthy predator, designed to hide his smell from prey.

As mentioned above, cooking destroys nutrients.

This is why dog food manufacturers have to resort to adding nutrients back in, usually in synthetic form, to satisfy basic nutritional requirements.

If you cook your Boxer’s food, you will have to do something similar.

If you don’t, you open the door to potential deficiencies.

But once you start tinkering with macro and micronutrients, you also run the risk of creating excesses, which can be just as damaging.

You avoid all this guesswork by meeting your Boxer’s nutritional needs the way nature intended: in fresh, whole food form.

Nutrients in whole foods are complexed with other nutrients in ways that makes them more bioavailable.

Nutrients in whole foods are also presented to the body in a take-it-or-leave-it form that runs no risk of overdosing.

In the 1930s, a human doctor named Francis Pottenger was keeping a lot of cats as experimental subjects for his research into human medicines.

In the process, he made an accidental discovery.

It came about when Pottenger’s usual source of food for the cats ran out.

He was forced to switch their diets from cooked meat leftovers from the local restaurant to raw meat, bones and offal direct from the abattoir.

Pottenger wasn’t consciously trying to feed his lab cats their natural diet, but he noticed a dramatic change in their health when he did.

In what became a decade-long investigation that is still regarded as the largest ever study into the effects of raw feeding, Pottenger observed 900 cats over nine generations.

He found that cats fed cooked food rather than their natural raw diet deteriorated in every measurable way.

Dr Pottenger found by changing the diet back from cooked to raw food, he was able to reverse most of the disease, but only until the third generation.

Thereafter, the damage was permanent — which speaks to the powerful influence of nutrition and the way it can stretch beyond the individual to offspring.

This underlines the importance of maternal health and nutrition when breeding Boxers.

The doctor also discovered that soil he fertilized with the feces of cats eating cooked food would not grow beans or grass.

Ground fertilized with the manure of raw-fed cats, on the other hand, grew both vigorously.

Of course, Pottenger’s findings apply equally to dogs and to all species and their natural diets.

His work aligns with the experiences of many raw feeding Boxer owners who notice a transformation in their dogs’ health after ditching kibble.

Both science and anecdotal accounts attest to the benefits of raw feeding over all other kinds of diets.

How Do You Make The Best Homemade Dog Food For Boxers?

If you want to provide your Boxer with a species-appropriate homemade diet, you need to make sure it’s a raw meaty bone-based diet.

These components should be provided in the following proportions:

An example of an ideal home-prepared meal for your Boxer is chicken frames (as the edible bone component), diced lean beef and a little lamb’s liver.

Here are detailed instructions for how to raw feed your Boxer.

You don’t need complicated, time-consuming recipes for Boxers with health problems, either.

A simple, natural canine diet is best for Boxers with:

and Boxers that are:

How Much Food Should A Boxer Dog Eat?

When you’re feeding real, raw food, a good guide is to feed between three and five per cent of your dog’s ideal bodyweight.

This is just a starting point.

Adjust up or down depending on how your dog responds.

Signs of overfeeding include a range of symptoms that are often mistaken for other things, such as:

Keep in mind that some of these symptoms are also normal when your dog is in transition from kibble to a fresh, homemade raw diet.

In this case, they are part of detox and will play themselves out and resolve as your dog’s body adjusts.

A similar thing happens whenever the body’s internal conditions are improved, such as when a course of heavy medication, like prednisone or antibiotics, is stopped.

What’s happening is the body is responding to the lightened toxic load, and using the opportunity to “clean house” by shifting long-stored wastes that the liver had parked in adipose tissue while the system was overburdened.

It’s a case of things appearing to get worse before better, but rest assured detox is a positive sign and a necessary part of the process.

A classic indication of detox is mucus in the poop.

How Much Does It Cost To Feed Your Boxer A Homemade Diet?

Home preparing your Boxer’s food doesn’t have to be expensive.

While fresh food can be pricier than packaged products, there are plenty of ways to make it affordable:

Bear in mind that a quality raw diet is an investment in your dog’s health and wellbeing.

Providing your Boxer with fresh, real food that’s in line with his biological requirements will save you money throughout your dog’s life, by sparing you the cost of vet bills.

If you are going to the effort of making your Boxer a homemade diet, make sure to choose the right kind.

Take care not to reintroduce the primary failing of store-bought dog food by cooking your Boxer’s food.

By far, the best home-prepared dog food is a natural canine diet, which is a raw meaty bone-based diet.

Becker, Karen, The Most Dangerous ‘Food’ on the Market – Snuffs Out Key Nutrients, Mercola Healthy Pets, 2018

Billinghurst, Ian, Give Your Dog a Bone, Warragul Press, 1993