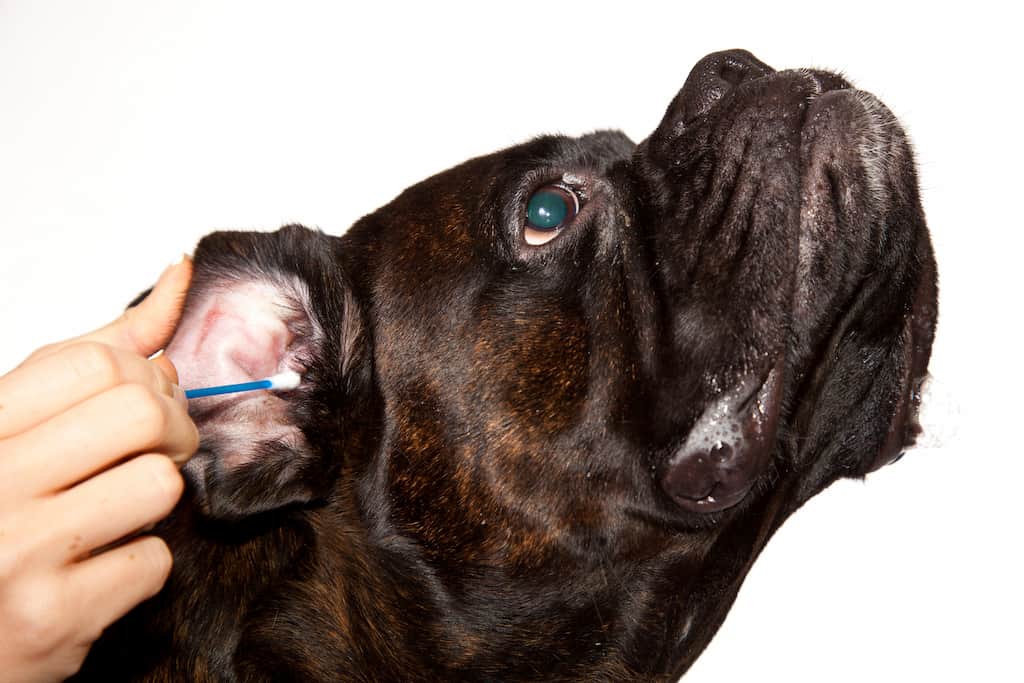 In a healthy Boxer, you should never need to clean the ears at all. Ears are self cleaning.

Then, get to thinking about why your dog’s ears are producing an excess of this material.

Because if you don’t address the cause, it will continue.

Worse, the same thing that’s causing the ear gunk will eventually go on to result in more serious health problems.

I am not a vet. This post is for general informational and educational purposes only. I encourage readers to see my full disclaimer here.

Why Are My Boxer’s Ears Full Of Brown Gunk?

It is not normal for a Boxer’s ears to be gunky, or to require cleaning.

They should be a pale pink color with no unpleasant odor or waxy build-up.

If the ears are producing so much waste that you need to clean it out, this ought to be a red flashing warning light that you pay attention to.

It is telling you that something is going awry in your dog’s body.

Normally, your Boxer’s body (like your own) gets rid of wastes via the kidneys and the bowels.

In other words, in pee and in poop.

The gut and the kidneys are the primary organs of elimination. The liver is also intimately involved in detoxification pathways.

However, when the body is overburdened with toxins or wastes, these organs get overwhelmed.

And so, the body enlists another organ — the skin, as a kind of pressure release valve.

In order to preserve as pristine an internal environment as possible, it pushes out the excess wastes or toxins through the skin.

The skin’s role in elimination is why it’s referred to as “the third kidney”.

What Causes The Body To Be Overburdened With Wastes?

The average pet Boxer is constantly ingesting toxins including those contained in:

Your Boxer also encounters a slew of environmental toxins on a daily basis, including:

Few owners connect these things with the condition of their dog’s health. The sooner you do, the better off your Boxer will be.

Resolving and preventing ear gunk (and other health problems) involves reducing your Boxer’s exposure to as many of these toxins as possible.

Environmental exposures cannot always be avoided, but you can control what you deliberately put into your dog’s body.

If you only do one thing, feed your dog a fresh, natural, species-appropriate diet.

Home-prepared raw food, particularly if you source organic meats, will be free of the preservatives, additives, flavorings, colorings, chemicals, pesticide residues and traces of weed killers including glyphosate that are regularly found in kibble.

See also: How To Raw Feed Your Boxer

Other Symptoms That Can Accompany Gunky Ears

In addition to the ear gunk, a Boxer whose body is overburdened with toxins may:

Holistic approaches to health understand these symptoms as all part of the same phenomenon.

Your dog’s body is trying to cope with an excess of toxins by eliminating wastes through secondary avenues.

The urinary and gut symptoms are due to irritation caused by the toxins on their way out of the body through these routes.

There is one circumstance in which ear gunk can actually be a positive sign.

If you’ve recently discontinued drugs or switched from kibble to a fresh, raw diet and your Boxer starts having ear gunk, you might conclude that the change has made things worse for your dog.

Your first thought might be to go back to kibble, or restart the medication.

What’s actually happened is this.

In removing the kibble from your dog’s diet, or the drugs from his system, you have lifted a toxic burden.

As a result of the improved biological conditions, your dog’s body is now able to begin clearing out long-stored wastes that, until now, have been parked in body tissues.

(This is similar to the way in which a fish stores in its body toxic heavy metals from an ocean polluted by industrial run-off, passing them up the food chain when it’s consumed by a larger fish.)

In other words, what you are observing is detox.

Sometimes the mobilization of stored wastes causes such an influx of toxins into your Boxer’s circulation that it triggers the use of the skin (and ears) to urgently release the excess.

During detox, in both dogs and humans, it’s common to see a temporary exacerbation of symptoms en route to healing.

It’s a case of things getting worse before they get better.

However, because you have removed the original cause of the toxicity (misfeeding or drugs etc), these are productive symptoms that are serving an important purpose: to get the waste out of your dog’s body fast.

Stick with proper feeding and you will see the ears clear in days or weeks.

The only thing that can interfere with this natural process is if you administer medication, misreading the symptoms as an ear “infection” in need of treatment.

Drugs are themselves a fresh source of toxins. And they will suppress the symptoms that were, in fact, achieving the healing.

You can see how this sets back the process while doing nothing to address the underlying cause.

It’s recognized that suppressing the release of toxins through the skin pushes disease back into deeper organs.

Your job here is not to add anything. It’s to get out of the body’s way and give it time to clear the backlog of toxicity.

According to the American Kennel Club, 20 per cent of dogs have some form of ear disease.

Dirty ears in a dog often get labelled “yeasty” ears or perceived as an ear “infection”.

But is the ear really “infected”?

Inevitably the result of such a diagnosis is the prescription of medication, both topical and internal, to kill the bugs.

Drops typically contain a triple-ingredient cocktail of antibiotics, steroids and anti-inflammatories, all in the one medication.

Oral antibiotics are guaranteed to mess with your Boxer’s gut biome, which can be difficult to restore, leaving behind a raft of gastrointestinal problems.

Before going down this path, it’s worth pausing to consider why your Boxer’s ears might have a yeast overgrowth or a proliferation of bacteria.

Yeast and bacteria belong on your dog’s skin and in his ears.

They can only overgrow when there is sufficient food for their population to explode.

What is the food?

The wastes excreted by your dog’s skin and ears.

Rather than kill nature’s microscopic clean-up crew, it’s worth treating the ear holistically, as one part of the entire body.

Address the systemic cause of the excess waste and the microbiome will naturally fall back into balance.

Again, proper feeding and avoidance of chemical exposures is the solution.

Fasting is known to accelerate detox.

To clear a gunky ear quickly, incorporate fast days into your dog’s routine.

How Not To Clean Your Boxer’s Ears

Refrain from putting ear cleaning solutions or home remedies in your Boxer’s ears as these can cause irritation.

A whole industry is built around convincing dog owners they need these products and potions.

There are far better, and safer, ways to keep your dog’s ears healthy.

The chemicals in these cleaning products do not belong anywhere near your Boxer’s ear canal.

Home remedies abound, but are just as inappropriate.

Commonly suggested things you should never put in your Boxer dog’s ears include:

The Right Way To Clean Your Boxer’s Ears

Ideally your dog is 100 per cent healthy and his ears are clean as a whistle.

If not, and while you are waiting for proper feeding and other measures to work, you can use a clean cotton pad such as a makeup removal pad.

Even better, use a piece of soft fabric like an old T-shirt cut into squares. This avoids the lint from cotton pads, which you don’t really want in the ear.

Use the cotton square or pad to gently wipe out the ear, being careful to sweep in an outward direction to avoid jamming gunk further into the ear canal.

It can help to fold the cotton pad, and to use the edge to get into the nooks and crannies.

If you must moisten the cotton pad with anything, colloidal silver is one of the less noxious things you can use, but you’re better off without it.

Colloidal silver is made of tiny particles of the metal silver, suspended in a liquid.

Silver was the most important antimicrobial agent prior to the introduction of antibiotics in the 1940s.

Its antimicrobial effect will interfere with the balance of bacteria and fungi that naturally live on a healthy dog’s skin, including in his ears.

You could wet the cotton pad ever so slightly with pure water.

Ideally though, you don’t want to be introducing moisture into your Boxer’s ear.

Make sure you use the tiniest amount of water and don’t leave the ear wet.

If your dog is completely relaxed with you inserting things into his ears and there’s no chance of him suddenly moving, you can use a cotton bud.

The anatomy of the ear actually means it’s actually quite difficult to rupture the ear drum (tympanic membrane).

You will be staying in the vertical part of the ear canal, well away from the horizontal canal that leads to the ear drum.

Still, be careful and don’t linger in there.

Again, be careful with your technique so you don’t push the debris further into the canal.

How To Teach Your Boxer To Let You Clean His Ears

It’s quite normal for your Boxer to dislike you inserting anything into his ears.

However, it’s smart to get him used to having his ears examined and fussed with, in case it’s ever necessary.

Begin this when he’s a puppy. Regularly touch and inspect his ears, putting your fingers inside and even mock wiping them out with a cotton pad.

If you encounter any resistance, you’ll need to go back a step. Use treats to reward him for allowing his ears to be touched. Then, gradually progress in small steps until he’s okay with having his ear wiped with a plain cotton pad.

This way, he’ll be well and truly desensitized to the process if he ever has a problem with his ears later in life.

Ordinarily, you shouldn’t need to clean your Boxer’s ears.

If the ears are producing gunk, reexamine what you are feeding your dog, and any use of chemical wormers, medication etc.

Often ear symptoms result from the combined effect of several of these factors, which increase the overall toxic load on the body.

You can wipe away the debris with a clean cotton cloth but preventing of recurrence will require addressing the cause.

Why Do They Crop Boxer Dog Ears?

Are Boxers Good With Cats?