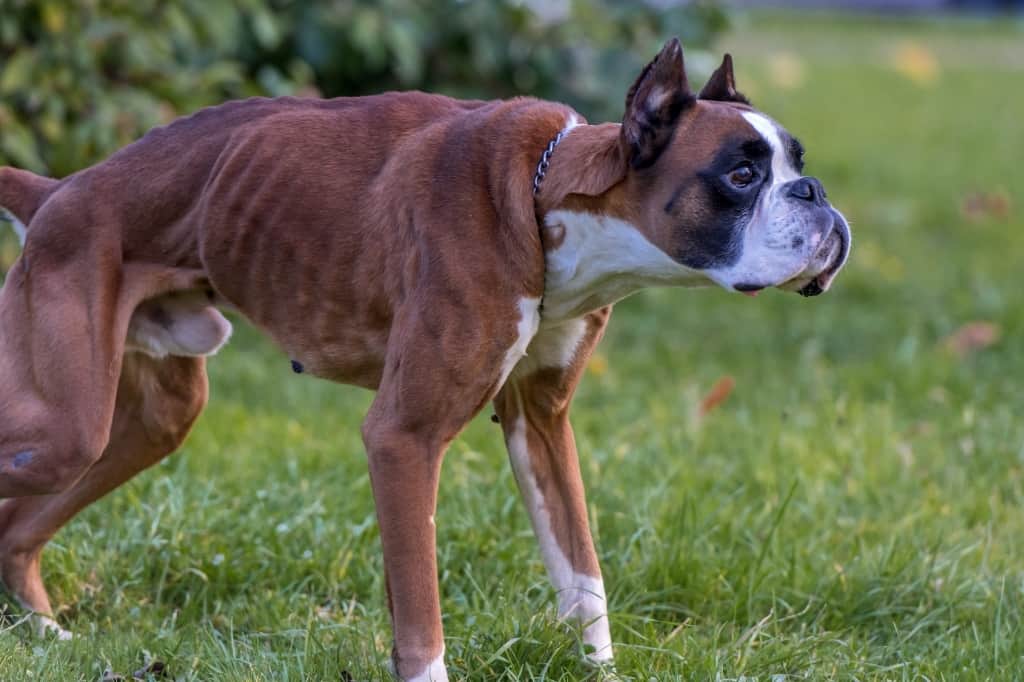 Boxer owners often worry that their young dogs are too thin and try to fatten them up.

It’s possible to put weight on a Boxer dog in a healthy way by carefully increasing the amount fed, or by supplementing the diet with high quality, protein-rich snacks like whole raw eggs.

But it’s also important to understand why your Boxer is lean — and to realize that he may not actually be underweight at all.

The Boxer pictured above is certainly too thin.

However the two photographed sniffing noses at the beach below are right-weight, displaying the hint of ribs seen in this lean, muscled breed.

How To Fatten Up A Boxer Dog

You can healthily increase your Boxer’s calories by:

Remember, plant/fruit and meat should be fed separately, rather than combined in the same meal.

This principle, ignored by many raw feeders, emulates the way dogs eat in the wild — consuming both meat and fruit but never at the same time.

Eating plants and meat separately (as done in the raw feeding style known as rotational monofeeding) leads to most efficient digestion.

This is because simple carbohydrates (fruit) digest much faster than the protein and fat that makes up meat.

Fruit and other plant matter will ferment (and create noxious waste products) if delayed in the gastrointestinal tract by consuming them at the same time as the much slower-moving meat.

How Not To Fatten Up A Boxer

There is a right and a wrong way to provide your Boxer with more calories.

Some common approaches will do your dog more harm than good.

A Caution Against Huge Meals When Fattening Up A Boxer

Dogs in the wild eat according to a feast and famine schedule, as dictated by the availability of prey.

A wolf pack might make a kill and gorge themselves, but then not eat meat again for a week or longer.

Because of the risk of bloat or gastric dilatation volvulus (GDV) in deep-chested breeds like the Boxer, it’s best not to feed enormous amounts of food in one sitting.

Feeding a single, large meal has been associated with an increased bloat risk.

So, if you’re trying to boost your dog’s food intake, consider doing it by adding an extra meal.

When a Boxer puppy first comes home at eight to ten weeks old he is usually quite roly poly (at least, for a Boxer).

It’s generally as he starts to shoot up and the puppy fat falls away, that some owners start to worry their dog appears to be “losing weight” despite eating plenty.

There might be comments from strangers — or even vets.

It is perfectly normal for Boxers to be on the lean side, especially when they’re one, two and even three years old.

Boxers are late maturing dogs that are still growing and not considered adult until three.

Sometimes vets unfamiliar with the Boxer breed will tell owners their dogs are underweight and recommend diets to “put some meat” on them.

As long as your dog is receiving adequate nutrition, don’t fall into the trap of trying to bulk him out before his body is ready to do so.

What Causes A Dog To Be Skinny

Other than being young, there are several other reasons a Boxer dog can appear on the skinny side.

A dog will ordinarily put on weight when he consumes more calories than he burns in exercise.

A raw-fed dog (as every Boxer should be) typically requires anywhere from three to five per cent of their ideal body weight in food made up of edible bone (eg. chicken frames), lean muscle meat (eg. diced lean beef) and a small amount of organ meat (offal) like liver.

Every dog is different, so experiment to find the right amount for your dog.

A dog’s needs will change over time, too, so what was the right amount in the past may need tweaking up or down now.

If you are already feeding five per cent of body weight, you can try slightly increasing but much more and you’re likely to be overfeeding.

Signs of overfeeding or fat overconsumption include:

This is often an owner’s first thought when a dog is skinny, but it’s not likely to be the problem.

Just as “scooting” is often wrongly associated with worms but more commonly caused by other things, a failure to gain weight is not usually due to intestinal parasites.

Chemical wormers are toxic chemicals known to cause problems in many Boxers — as more than 20 000 members of this group can attest — so they are not something you want to use regularly or lightly.

If you want to rule out worms, opt instead for a fecal test which will show if parasites are present.

Dogs recovering from being sick can be both over and underweight and may appear generally out of condition.

Steroids like prednisone cause dogs to gain weight while losing muscle.

They can develop pendulous abdomens in what’s known as a “Cushingoid” appearance.

If this occurs in a dog not taking prednisone, it can be a sign of Cushing’s disease which is due to an excess of the stress hormone cortisol, made by the adrenal glands.

Boxers often get labelled as having “sensitive stomachs” and all too often experience gastrointestinal upset.

They may receive diagnoses of inflammatory bowel disease or “Boxer colitis”.

The vast majority of these dogs are kibble fed.

Regardless of brand and price, kibble is a poor quality diet compared to the fresh, raw meats a dog is designed to eat.

As a result of this misfeeding, and gut damage inflicted by commonly prescribed medications like antibiotics and steroids, Boxers can end up “malabsorbed”.

This is a condition where a damaged gut is not able to properly extract the nutrients from food.

Even when more food is fed, it doesn’t produce weight gain because the dog’s body is not able to access the nutrition.

The solution is actually to feed not more, but less — in the form of fast days.

Fasting supports the gut to heal by providing digestive rest, which allows energy to be concentrated on cellular repair and regeneration.

This is not a process that’s well understood by mainstream medicine — human or veterinary.

However, owners of dogs that have been heavily medicated (or repeatedly medicated over a long period of time) often observe their dogs experiencing a period of intense detox when the drugs are stopped.

The same effect can be seen when the diet is improved from many years of kibble feeding to fresh, raw, species-appropriate food.

The same phenomenon happens in humans.

During detox a dog will rapidly lose weight and fail to gain weight regardless of how much is fed.

This is because the body is prioritising the clear-out of long-stored toxins, a process that takes a lot of energy and takes precedence over the storage of fat reserves.

Once the detox is complete, the dog rapidly returns to a healthy weight but often the skinniness has to be endured while the body heals.

Perception plays a role in this.

Because so many pet dogs are fat, many owners think an ideal weight dog is too thin.

One big factor is neutering, which makes dogs heavier.

Because it’s the norm to neuter pet dogs, people are used to seeing Boxers that are fatter than they ought to be.

Another effect of neutering, particularly when done young, is that it makes dogs grow taller — because it interferes with the closure of the growth plates in bones.

Dogs of normal growth and stature can appear stockier in comparison.

Check your own perceptions, and resist the temptation to overfeed your Boxer so that his appearance conforms to society’s mistaken expectations.

Why You Mustn’t Overfeed Your Boxer

All things being equal, it is far healthier for a dog to be on the lean side than to be overfed.

Overfeeding causes a number of problems.

For a start, it won’t work.

You can’t override biological program your Boxer’s body is following.

Secondly, overfeeding will only create more workload for the body, more waste to process.

This saps vitality with no gain.

Thirdly, heaping on the calories can cause a Boxer puppy to grow too fast — something that can cause bone and joint issues in larger breed dogs.

As the Australian vet Dr Ian Billinghurst explains in his book Give Your Dog a Bone, it is better to err on the side of less food than more for a growing puppy to, in a sense, slightly hold back his growth.

This mirrors what happens in nature, where dogs are always lean because of limited food and the energy expended to find, catch and kill prey.

Your Boxer will fill out naturally according to his body’s own timeline, not any we impose.

Why So Many Boxers Are Fat

Yet, we feed them more often.

Dogs in the wild eat more like every three days to once a week, not every day.

And we feed our dogs much higher fat foods than they’ve evolved to thrive on.

The game meats that dogs eat in the wild (like deer and rabbit) are lean compared to factory-farmed livestock.

The disparity in fat content between a dog’s natural diet and what pet dogs are fed is even more dramatic when you compare fresh, wild lean meats with highly processed dog foods like kibble.

See also: Most Pet Dogs Are Fat. Is Your Boxer One Of Them?

What Is The Correct Weight For A Boxer?

The individual height, weight and physique of a Boxer will vary depending on his bloodline.

According to the American Kennel Club an adult male Boxer can be larger, weighing 65 to 80 pounds (29 to 36 kg).

These figures are not terribly important.

More than counting kilograms, the best way to judge whether your Boxer is the right weight is to take a look at his appearance.

First, look at your dog from the side.

There should be a hint of the last couple of ribs visible — if not while standing, in certain positions as your dog moves about.

You ought to be able to feel the rest of the ribs beneath a thin layer of fat, but not see them.

The deep chest should taper into a tucked waist.

Now, look at your Boxer from above.

Rather than a barrel shape, you should be able to see the waist from above.

A Boxer is genuinely too thin if you can see:

If a Boxer is truly underweight, it’s a matter of increasing the calories consumed compared to energy expended.

The important thing is to do this by upping the intake of high quality protein sources, rather than by adding junky or high fat food, which will only have a detrimental impact on health.

But in the vast majority of cases, time and continued proper feeding will see a Boxer build muscle and attain a healthy weight.

Should I Get A Second Boxer?

How To Fix Boxer Dog Acne