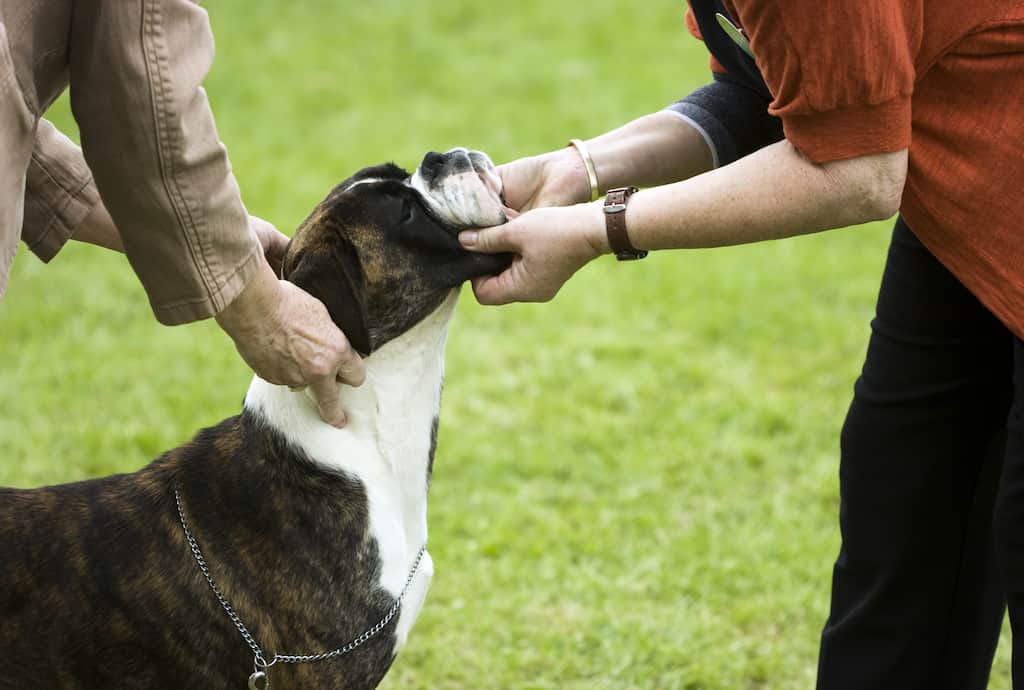 Sometimes owners are told – by strangers at the dog park or by vets or trainers — that their Boxers “don’t look purebred” or “aren’t full Boxer”.

Though you can’t go solely on looks, you can generally tell whether a Boxer is full blooded or a mix by examining the dog’s features and seeing how well they match the breed standard.

Sometimes a Boxer’s features may vary from the classic Boxer look not because he’s a Boxer cross, but because he has been “poorly bred” or comes from a bloodline unfamiliar to the person making the assessment.

If you got your Boxer as an adult from a shelter or from a breeder who wasn’t registered and didn’t give you any papers, your best bet may be to try a DNA test.

I am not a vet. This post is intended for general informational and educational purposes. I encourage readers to view my full disclaimer. Boxer Dog Diaries is reader supported. I may receive a small commission, at no additional cost to you, if you make a purchase via links I share. Thank you for your support.

What Features To Look For In A Boxer Dog

Boxers are are highly recognizable dogs — not just because they figure each year among the most popular breeds in the United States (ranked 14th by the American Kennel Club in 2020).

Why You Shouldn’t Get A Boxer: 12 Cons Of The Breed

They have distinctive qualities that set them apart from other dogs and that are found consistently in Boxer after Boxer, defining the breed.

If the dog in front of you is a Boxer you will see:

What It Could Mean If Your Boxer Doesn’t “Look Purebred”

If your Boxer doesn’t look as expected, possibilities include:

American Vs. Euro Boxers
Egg Headed Boxer Puppy?
“Flying Nun” Ears In Boxer Puppies
When Should I Neuter Or Spay My Boxer?
Boxer Coat Colors
Why Do They Dock Boxers’ Tails?
Ear Cropping In Boxers

Signs That A Boxer Puppy May Not Be Purebred

There are plenty of “sure-fire ways” to supposedly tell if a Boxer is purebred.

Some people have the idea that the roof of a purebred Boxer’s mouth will always be pink, not black.

Others insist the tiny bottom front teeth will always be crooked in a true Boxer.

More reliable indicators that may suggest your Boxer is not purebred include:

What Is The Boxer Temperament?

Signs Of A “Poorly Bred” Boxer

Your Boxer may be 100% genetically pure, but carry one or more “faults” as a result of being “poorly bred” by a non-professional breeder.

Faults in Boxers include:

It could just mean this particular dog is not “show quality” i.e. does not represent the breed at its absolute best and should not be bred from.

These Boxers will still likely have the winning Boxer personality, although poor breeding can extend to temperament.

These dogs may lack steadiness and have a higher likelihood of developing behavior problems.

…all of which sets dogs up to reach their full potential as exemplars of the Boxer breed.

DNA Testing: How To Find Out If A Boxer Is Purebred

DNA testing is available to owners wondering about their dogs’ lineage.

It can also indicate whether a dog may have a higher likelihood of developing some of the diseases seen in Boxers.

Partnered with Cornell University’s veterinary school, Embark bills itself as “the world’s most accurate DNA testing”.

Embark’s Breed + Health Kit screens for more than 200 genetic diseases as well as breed and ancestry.

You’ll also get a “wolfiness score” for your dog and a family tree allowing you to potentially connect with your Boxer’s relatives.

There is no blood test or vet visit required, just a cheek swab you can do at home and send in.

Results are usually available with two to four weeks.

Be aware that while a DNA test may satisfy your curiosity, it doesn’t take the place of papers provided by a registered breeder.

Without this documentation, a dog has no traceable lineage and won’t ever be officially considered purebred.

Commercially-available DNA testing is also no substitute for proper health screening done as part of any reputable Boxer breeding program — as described in the next section of this article.

Does It Matter If Your Boxer Is Purebred Or Not?

It’s tempting to think it doesn’t matter whether a pet Boxer is purebred or not.

After all, most of us aren’t looking to show our dogs, or breed from them.

On one level, a Boxer’s purebred status is irrelevant — once the dog has been brought home, he’s a member of the family and will be loved regardless of his pedigree or lack thereof.

However, breeding matters very much when it comes to health.

It’s not so much about the dog’s appearance and whether his nose is too long or short to please a show ring judge.

More the concern is the poor breeding practices that tend to accompany Boxers of uncertain lineage.

The value of getting your Boxer from a breeder who is not only registered, but reputable, is that this person has likely dedicated a lifetime to breeding, gaining valuable experience and specialist knowledge.

And if this breeder is truly ethical, the focus will have been as much, if not more, on breeding vitally healthy, long lived dogs as well as ones that look the part.

Registration of breeders introduces a higher degree of accountability and increases the likelihood that all possible efforts have been made to not breed from dogs carrying genes for heritable diseases.

Rigorous testing and careful selection of dams and sires helps mitigate the health risks created by the reduction in genetic diversity that necessarily occurs in purebred dogs.

Purebred dogs, in contrast to mutts, are produced by repeatedly breeding the same relatively small number of dogs together (inbreeding) to give uniform, desirable characteristics.

A trusted breeder will have done a battery of tests on your Boxer’s parents and several previous generations, to make sure that dogs with hip and elbow dysplasia, various heart abnormalities and the genes for degenerative myelopathy are excluded from breeding programs.

This is what’s meant by the expression “betterment of the breed”.

As Kaco Boxers told Boxerforums.com, “Papers are not just for those interested in showing or breeding. They are much more than that. They help protect the breed we all love.”

A poorly bred but pure Boxer may be more likely to end up with one of the diseases the breed is prone to, as a result of the breeder not bothering to conduct health screening.

A Boxer cross is usually the result of random breeding, but at least benefits from what’s known as “hybrid vigor”.

Hybrid vigor refers to the protective effect of the greater genetic diversity created when dogs of different breeds mate.

How To Make Sure You Get A Purebred Boxer Puppy

The best way to make sure you’re getting not only a purebred Boxer, but one that’s as healthy as can be, is to do your research and find an ethical, reputable registered breeder.

This kind of breeder will provide you with papers detailing your puppy’s pedigree going back at least five generations, naming the specific dogs your puppy is descended from.

These papers then allow you to register your dog as a purebred Boxer.

Note that a “limited registration” just means you don’t have the right to breed from your dog, something many breeders stipulate in order to retain control of their bloodlines and prevent “backyard” breeding by owners without the necessary expertise.

Without papers a Boxer may be purebred but will always be officially regarded as a mix, in the sense that the dog’s offspring will not be able to be registered as purebred Boxers.

Once you’ve settled on a breeder, the next challenge is to choose the right puppy from the litter.

It’s thought that the presence of a pronounced “smart bump” or “egg head” in a young Boxer puppy leads to a better head shape in the adult dog.

“Other” Types Of Boxers

There are a range of Boxers that look a little different from the standard fawn or brindle specimen.

The extended Boxer family includes dogs that are very much still purebred Boxers such as:

Are White Boxers Less Healthy?
When Boxer Met Corgi. How The Bobtail Was Born
The Curious Case Of The Black Boxer. Or Is It?

It also includes some dogs that are firmly in the Boxer cross category, like:

And then there are:

Sometimes a Boxer “not looking purebred” is due to pure observer error.

Breeds sometimes mistaken for Boxers by those not familiar with either Boxers or the other breed include many of the “bully” breeds such as:

If something doesn’t look quite right about a Boxer, and you don’t have papers, you may begin to question whether your dog is purebred.

You can often reach a pretty reliable conclusion by comparing the dog’s features to the breed standard, but a DNA test is the closest you may come to certainty.

In any case, there are many worse things than not being purebred, and a Boxer cross may well be healthier than a poorly bred purebred Boxer.

Should You Breed Your Boxer?