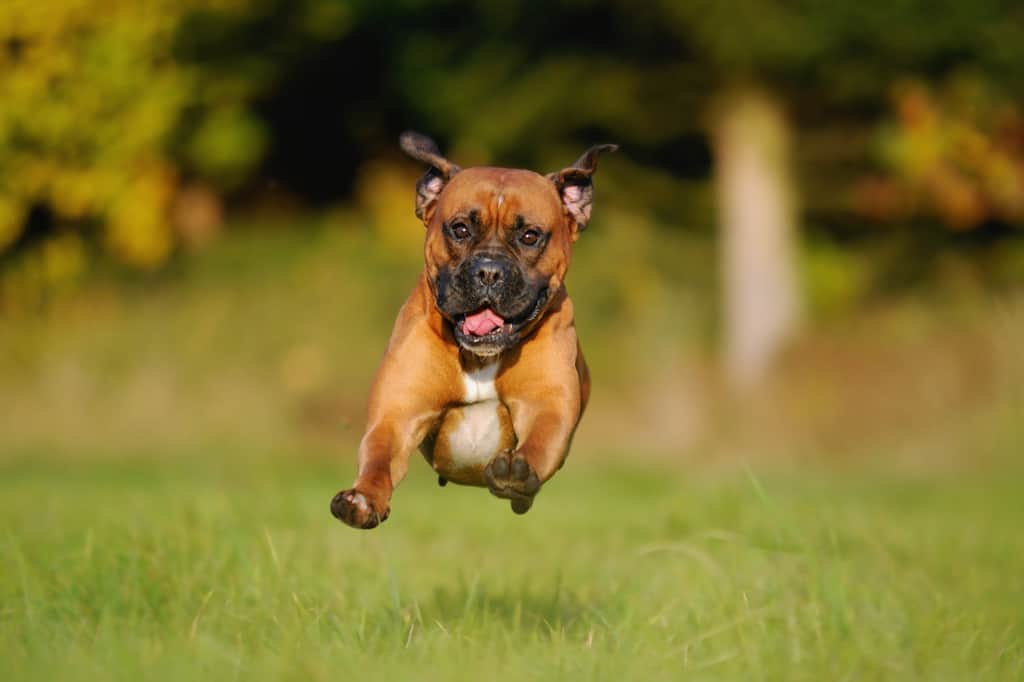 Imagine knowing you could let your Boxer off leash in the woods or at the park and be 100 per cent confident he would rocket back to you when called.

This is how powerful a reliable recall can be for you and your Boxer.

The key to teaching a Boxer to come when called is cementing in your dog’s mind that rewards flow from it.

To do this, use high value treats, be consistent and give your dog plenty of chances to practice.

The right equipment, including a long line, will go a long way.

Once you master a rock solid recall, you and your Boxer will be able to enjoy more freedom, and a lot less stress.

Before embarking on recall training, make sure you don’t set yourself and your dog up to fail.

One of the most common ways owners undermine their dog’s recall is by calling their dog to them for unpleasant tasks.

You want to make sure that coming when called is always a positive experience.

This means never call your dog to you for:

… or anything your dog feels less than enthusiastic about.

If you follow “Come!” with something your dog doesn’t like, you’ll weaken the association you’re trying to embed in his psyche: coming when called will mean something good happens.

Likewise, never scold your dog when he comes back to you too slowly or after first running off.

In his mind the negativity will be connected to coming back, not the delay or the initial running away.

You mightn’t reward a slack performance of the command with as high a value treat, or as much praise, but punishment should never enter the equation.

Make a point of recalling your dog for things like:

… and anything he loves to do.

In this way, your dog will come to inextricably link the recall command with rewards.

In many little ways every day, you’ll be reinforcing that coming when called is a fantastic idea.

When he disobeys you and tears off after a squirrel, it’s not because he’s being “naughty” or wilfully disobedient — though it sure can feel that way.

Dogs are much more straightforward than that.

Squirrel plus running just equalled more fun than coming back to you.

(That, and your dog hasn’t had enough practice controlling the impulse to chase after a moving furry object.

Prey drive is a real thing in Boxers.)

Think of it from your dog’s perspective and understand what makes a compelling incentive for him.

Ask yourself: what’s in it for your dog?

Then set about making it worth his while to come when called.

It won’t always be this way.

Once your recall is well on the way to being trained, you can fade out treats or intersperse them with alternate “life rewards”, like play.

But by far the easiest and quickest way to train your Boxer will be via positive reinforcement using food rewards.

What if your Boxer isn’t food motivated?

This is what’s meant by “high value” treats — find a tasty morsel your Boxer will do anything for. If he doesn’t care about it enough to come running, it’s not high enough value.

It may need to be something he doesn’t normally receive in his day to day meals, so that it carries special allure.

If your Boxer still doesn’t care about food, even if it’s a slice of fresh, raw sardine or a chunk of raw beef?

You have a few choices:

3. Have The Right Equipment

For recall training you will need:

A long line can be as simple as a length of rope.

If you prefer, you can buy hard-wearing, waterproof leashes specifically designed for the purpose.

Attach it to your dog’s collar but instead of holding the end like a leash, let your dog drag it on the ground behind him.

The idea behind a long line is that it gives your dog a sense of freedom and the chance to make his own choices .. while you retain control.

If, at any time, your Boxer decides to disregard your command and bolt, all you have to do is step on the long line, and reel him in.

It’s an essential bit of kit for denying your dog the chance to practice undesirable behaviors.

This is important because once your Boxer has “stolen” his own reward (in this case the fun of chasing the squirrel) instead of waiting to receive one from you, he’ll know how good it feels and be more likely to seek out the same rush next time.

A long line helps you say commands once only — give the cue word and then, if it isn’t obeyed, enforce the action with a gentle tug.

Without a long line, you are powerless to make your dog do as he’s told, since he can simply run off.

A treat pouch allows you to always have a reward available while keeping your hands free.

Useful at home, and out and about.

A clicker is exactly what it sounds like. A device that makes a “click” sound when you press it.

Your dog hears your voice all day every day and a lot of the time tunes it out. After all, it means so many different things depending on tone ,volume, the words said.

A clicker, on the other hand, is a distinct sound that cuts through the noise of human conversation and always means the same thing: that he’s done something right and is about to be rewarded for it.

Clicker training allows you to precisely “mark” the moment when your dog achieves the desired action, helping to clearly communicate what you want.

The click serves to bridge the delay between the behavior and the reward, giving you time to fish out the treat, without missing the moment.

Coming when called is not something you can train your Boxer to do overnight.

It takes a lot of practice, in a wide variety of situations.

You can start recall training as soon as your pup comes home as an eight to ten-week-old puppy.

By the time the Boxer stubborn streak kicks in, you should have him well enough conditioned that it’s no match for your recall.

Start in a super low distraction environment — like your garage or the living room or backyard.

Once the command is mastered there, gradually increase distractions and “proof” the recall in closer and closer proximity to stimulating environments.

Remember, if your dog doesn’t obey the command 100 per cent of the time in all situations, you aren’t finished.

If your dog mostly comes when called but fails two per cent of the time, it’s that two per cent that will bite you in ass, as straight-talking ex Navy SEAL and dog trainer Mike Ritland would say.

If your dog can’t perform every time, it usually means you haven’t done enough practice.

You may need to go back a step to a lower distraction environment until your Boxer gets it right every time there.

Then you’re ready to incrementally increase the distractions.

Scale up little by little, so that your dog is always succeeding 85 per cent of the time. It’s important you’re both enjoying yourselves.

The moment something feels like drudgery, a Boxer will shut down and opt out.

Stop before either one of you gets frustrated and end on a high, with your Boxer wanting more.

Better to do many, shorter sessions per day than one long one Two to five minutes here and there is plenty long enough for a Boxer’s attention span.

Don’t expect too much, too soon.

Performing a rock solid recall in the face of near-irresistible distractions — like a squirrel, or a bunch of other dogs — involves a high degree of difficulty.

If you take it step by step and stick with it, you will see results.

Dogs do what works and what they can get away with.

If you create any loop holes, your Boxer is sure to find and exploit them.

Be clear from the outset exactly what you are asking your Boxer to do.

Know this in your own mind, or you’ll be sending mixed messages to your dog.

An A+ recall should be:

Insist on this, every time.

Don’t punish anything less, but don’t reward it either.

If your Boxer can’t give you this kind of enthusiasm, it’s an indication you need to ratchet back the distractions.

Move to a less exciting environment.

Coming when called is one of the most important, lifesaving and liberating commands you will ever teach your Boxer.

As alert, inquisitive and independent-minded dogs, there is no breed for which recall training is more important.

If you can teach your Boxer to come on command, you’ll be able to give him the freedom to gallivant about whilst maintaining enough control to keep him safe.