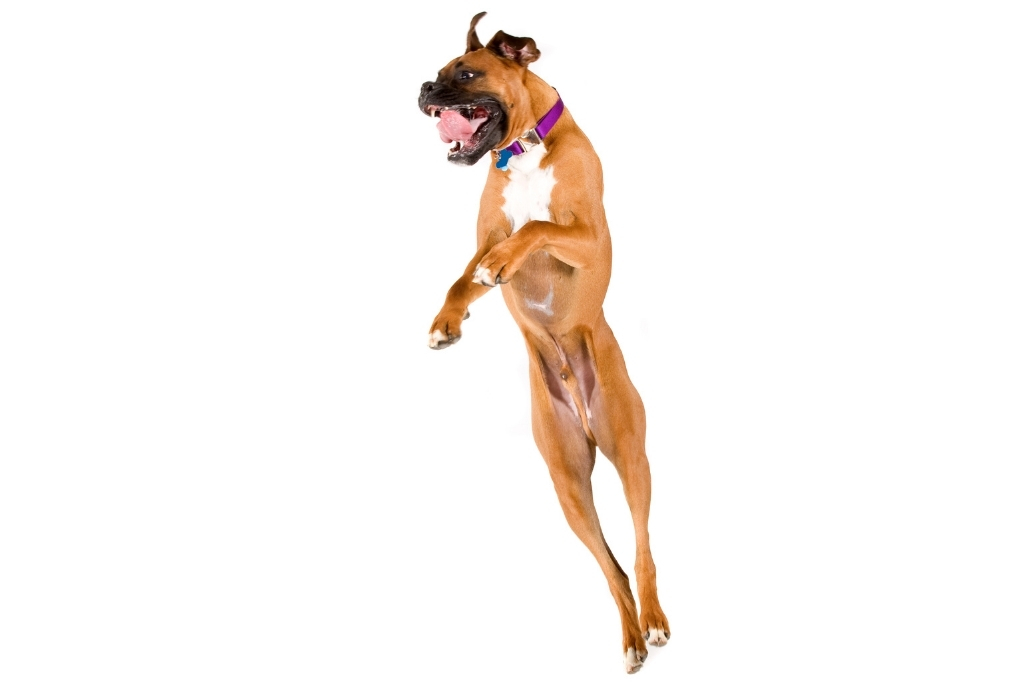 Boxers are excitable dogs, so much so that some owners regard them as “hyperactive”.

If your Boxer is jumping up on people or pulling on the leash during walks, you may well be dealing with normal Boxer exuberance that will settle with proper training, practice and maturity.

But a Boxer that’s regularly wrecking his own bed or the sofa, engaging in destructive chewing or other misbehavior?

This Boxer is trying to tell you something is wrong, much like a child acting out.

More than likely what your Boxer is saying is “I’m bored!”

You can bet that one or other of his needs are not being met.

The first step towards calming down your hyper Boxer is understanding what’s driven him to this state in the first place.

Here are 13 factors that may cause hyperactivity in a Boxer.

Boxer puppies are a riot.

Zoomies at sundown, burning a track around the backyard or making an obstacle course out of your furniture is par for the course.

This kind of hyperactivity is nothing to worry about.

Don’t expect too much of your pup — he is still a baby.

Just make sure he’s in a safe environment when he has those bursts of energy.

2. He’s Not Getting Enough Physical Exercise

When you have as much joie de vivre as a Boxer, a sedate walk just doesn’t provide the scope to express what you feel inside.

To really blow off steam, a Boxer needs a good off leash romp each day.

Chasing a ball or catching a frisbee at the park is a great option.

Mix it up with some swimming at the beach or lake, a fun way to exercise while going easy on the joints.

Playing with a tug toy uses just about every muscle in your dog’s body. It builds engagement between the two of you, while thoroughly tiring your Boxer out.

A tired Boxer is a well behaved Boxer.

If your Boxer is acting hyper, increase his physical activity level and you should see the crazy ratchet down a few notches.

They will quickly get bored if you’re not engaging their minds as well as their bodies.

And a bored Boxer can get himself into quite a bit of trouble.

Include in your Boxer’s routine some games that require him to problem solve, and to use his senses.

It can be as simple as showing your Boxer an object, hiding it in the house and then telling him to “Find it”.

DIY “snuffle mats” made from rubber mats tied with fleece allow you to hide treats so that your Boxer can sniff them out.

Puzzle toys will be a hit.

Loneliness and boredom are a horrible combination and will give rise to undesirable behaviors.

Plan your days so you are devoting regular quality time to spend with your Boxer, not just lounging on the couch together but actively doing things that he loves.

Even when you’re busy, a five-minute play session here and there makes a world of difference to your dog.

If a Boxer detects a vacuum at the top, he will feel compelled to fill it.

This can lead to all kinds of behavioral issues, as your dog vies for dominance.

When an owner establishes herself as the alpha, a Boxer can relax into the role of good follower dog.

Make sure you are not inadvertently encouraging crazy behavior.

You might be laughing in response to your Boxer’s hyper antics.

Or, if your Boxer’s hyperactivity manifests as waking you up in the middle of the night, you may be accidentally rewarding the behavior by giving him too much attention.

Make sure he’s not needing a potty break, but don’t be drawn into a midnight play session, otherwise you’ve just guaranteed he’ll wake you up again tomorrow night for more of the same.

6. Lack Of Training Or Proper Socialization

If your Boxer is doing an unwanted behavior, don’t pass it off as just him being hyper.

Make the rules, and stick to them so that your Boxer knows what’s acceptable and what isn’t.

You can help a Boxer get control of his urges by playing games that build impulse control.

An example would be kicking a ball, but requiring your Boxer to watch it go and wait for your cue before chasing after it.

This takes a lot of self control!

Start easy by just placing the ball out a meter or so, while having your dog stay in a sit, and then releasing him with a “Go get it!”

Gradually you can move to gently tossing the ball and then throwing it further and finally kicking full force while your Boxer doesn’t budge.

You can build these games into the daily routine in simple ways.

You might have your Boxer remain in a sit while you put down his dinner bowl, rule being he’s only allowed to start once you give him the okay.

Hasn’t been given enough opportunity to develop impulse control

Hasn’t had enough exposure to new situations or ones that he finds exciting.

It’s possible your Boxer only exhibit hyperactive behaviors in particular situations that he hasn’t had enough experience with to become desensitized.

Let’s say your Boxer goes nuts when he gets a whiff of the petting zoo at the local markets.

In this moment he is over-threshold and past the point of being able to listen and respond to instructions.

Recognize that your dog needs more exposure to this kind of situation.

Use high-value food rewards to keep his attention and work at a distance from the distraction at first, gradually moving closer while requiring your Boxer to remain focussed and calm.

Take it slowly, staying beneath your Boxer’s threshold so that he’s able to succeed 80 per cent of the time before you make it a touch harder by moving closer to the distraction.

8. Being Left Alone Too Often And Too Long

A Boxer left alone for long stretches will not fare well.

Arrange your schedule so that he’s not by himself for hours on end.

Can you or another family member involved in your dog’s care duck home for lunch and a quick walk?

Can you bring your pup with you to social engagements?

Look for ways to work your dog into your life outside the home.

Research has demonstrated that carnivores like dogs derive significant emotional and psychological benefits from the experience of chewing on a raw meaty bone.

Raw meaty bones have been the basis of the canine diet for a million years.

You can make a transformation in your dog’s happiness, and therefore his behavior, just by giving a raw meaty bone once or twice a week.

The act of devouring a bone is fully engaging and highly stress-relieving for a dog.

You will see the absolute pleasure written all over your Boxer and you’ll notice the flow-on effects to his behavior.

Lamb necks make great chewing for a Boxer. As non weight-bearing bones from young animals they are nice and soft.

There’s an increasing tendency to pathologize modern pet dogs to within an inch of their lives.

We seem to be attributing to dogs a whole suite of neuroses and mental health problems that mirror those seen in the human population.

It’s not uncommon for pet dogs to be sent along to doggy day care, medicated for anxiety.

Don’t leap to a diagnosis of separation anxiety for your Boxer.

It is a real condition with extreme symptoms.

But chances are your dog has something a lot more straightforward: a correctable behavioral problem caused by a shortcoming in his training or management.

Nutrition affects just about every aspects of a dog’s functioning.

Feeding highly processed diets like kibble can contribute to behavioral problems in the same way consuming lots of preservatives, artificial flavorings and colorings are thought to exacerbate behavioral disorders in children.

Boxers do best eating a natural canine diet based around raw meaty bones.

Just like humans, dogs can be upset by a change in their living circumstances or routine.

If your Boxer is acting up, consider whether he has recently experienced:

Six or eight hours in a crate is difficult to tolerate for any dog.

It is certainly not how Boxers, bred as working dogs, are meant to spend their days.

Equally, you shouldn’t turn your Boxer loose in the house without having dog-proofed it.

Giving your Boxer the run of the house without building him up to it slowly is asking for trouble.

When Do Boxers Calm Down?

Boxers generally mellow out as they reach adulthood.

As a slow maturing breed, Boxers can look like adults but still be very much puppies, mentally.

They are not considered fully adult until two or even three years old.

This doesn’t mean your crazy Boxer will chill out if only you wait long enough.

The levelling out of behavior that accompanies adulthood is not so much automatic as it is a result of all the work and training you put in during those early years, finally coming together.

Do Boxers Calm Down After Being Neutered?

Many owners are under the impression that neutering a dog will fix problem behaviors.

In practice, they often find the opposite is the case.

Removing the sex organs, which produce hormones vital for many process throughout the body, has been found to increase the incidence of:

If you are planning to neuter your Boxer in the hopes of achieving behavior modification, try some positive reinforcement training instead.

Be aware that neutering or spaying your Boxer dramatically ups the chances of a range of health problems that are significantly lower or non existent in intact dogs.

How To Calm Down A Boxer Dog

Set your Boxer up for success by providing plenty of:

In the heat of the moment you can calm down a Boxer by:

How Not To Calm Down A Hyper Boxer

A hyperactive Boxer is not inevitable. A happy, well-adjusted Boxer is the goal.

Hyperactivity is more than a nuisance. A wild Boxer can pose a danger to himself and others — he may swallow the foam from that cushion he’s just ripped into a thousand pieces.

Not to mention the impact of existing in state of near-constant arousal, stress which will take a physical and psychological toll.

If your Boxer is going in this direction, it’s time to reassess how he’s being managed.

By making a few tweaks — usually providing more exercise and mental stimulation — you should see your Boxer calm down.

The Story Behind Your Boxer’s Coat Color