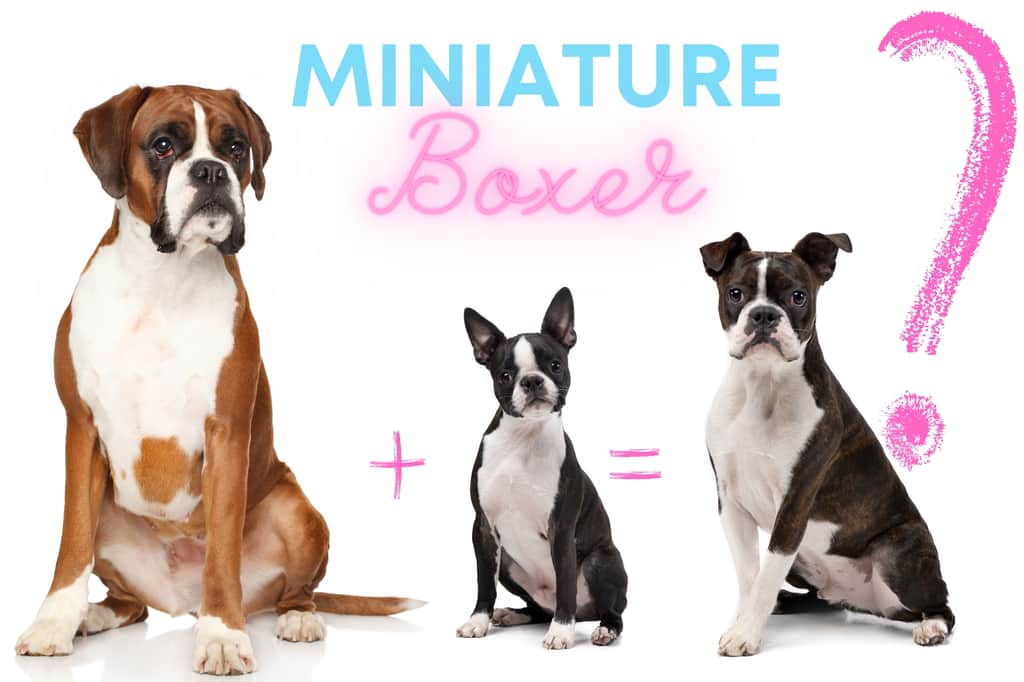 So called “miniature Boxers” are the result of mating a Boxer with a smaller breed, often a Boston Terrier.

As such, these dogs are neither Boxers, nor a new breed in their own right.

What Breeds Make a Mini Boxer?

Many different matches can produce a dog that resembles a Boxer in some ways but is of significantly smaller stature.

Most breeders offering these dogs typically use a Boston Terrier.

Other breeds that have been bred with Boxer to create “mini Boxers” include the:

Some breeders even mate Rat Terriers with Pugs (no Boxer involved!) and call the result a mini Boxer.

All domestic dog breeds are man made, in the sense that they were created by deliberate, selective breeding rather than any natural evolution from wolves.

However, no Boxer breeder would deliberately include in a breeding program specimens that are smaller than the breed standard.

Nor would they cross Boxers with other breeds and still claim them to be Boxers.

The one exception is the Bobtail Boxer, created by Bruce Cattanach who crossed Corgis with Boxers to introduce the bobtail gene as an alternative to tail docking.

Even the pursuit of “black” Boxers is almost universally frowned upon by the Boxer establishment, because such heavy brindling as to create a virtually solid black coat violates the breed standard or creates dogs that are regarded as poor examples of the breed.

The American Kennel Club does not recognize the miniature Boxer as a breed.

An organization called the American Canine Hybrid Club acknowledges the Miniature Boxer, along with a mind boggling array of other Boxer crosses such as the:

How Do Miniature Boxers Compare To Boxers?

Mini Boxers differ from Boxers in:

Breeders of these dogs claim they have superior:

Size: How Big Do Mini Boxers Get?

Those who breed mini Boxers tout them as delivering the personality of a Boxer, in a smaller package.

They’re pitched as more size-appropriate dogs for apartment dwellers (although Boxers can do quite well in apartments as long as they’re properly managed).

Color And Markings: Mini Boxers Come In Blue, And Black And Tan

Boxers come in only brindle, fawn and white.

According to the Boxer establishment, Boxers that appear to be black are technically just very heavily brindled — or not purebred Boxers.

As well as the regular Boxer colours, miniature Boxers come in an enormous array of coat colors and patterns, including:

Dogs sold as “Mini Boxers” display much more variation in coat color than purebred dogs, which are defined by their homogeneity.

There’s also far greater variation in appearance than is seen in established hybrids like the Labradoodle.

Facial Appearance: Not Quite Boxer

There is considerable variation in the heads of mini Boxers.

Overall, the face looks most like a Boston Terrier.

These dogs clearly have Boxer in their backgrounds somewhere, but gone are the classic proportions — and, arguably, much of the appeal — of the Boxer head.

Even the distinctive Boxer countenance — kindly, intelligent and playful — has been replaced with quite a different expression.

The eyes are not Boxer eyes, with a bulge and a placement that can tend to wall-eyed.

Body Shape: Not So Shapely

Their builds are closer to the Staffordshire Terrier or the Pit Bull.

Mini Boxers are billed as being healthier than Boxers.

This may be feasible, since most crossbreeds have fewer health problems than purebred dogs, which by definition come from a much smaller gene pool.

Hybrid vigor is the term given to the protective benefits conferred by genetic diversity.

The life expectancy of mini Boxers is said to be 12 to 15 years, compared to 10 to 12 years for the average Boxer.

This would be in keeping with the general rule that smaller dogs outlive larger breeds.

Should I Get A Miniature Boxer?

If you are considering getting a miniature Boxer, be aware this is not necessarily a smaller version of a dog that is in every other way a Boxer.

The physical characteristics of these dogs are considerably different to Boxers.

It’s unclear how much of the Boxer temperament and character they possess.

Your pup may or may not grow up to look and behave as you expect.

Most Boxer devotees would say you can’t improve upon perfection.

If you have a dog that comes from a registered breeder and resembles a Boxer in every way except size, you probably just have a smaller example of the breed.

If the head and body look more like a Boston Terrier and the dog came from somewhere other than a registered Boxer breeder?

You may have a “mini Boxer” on your hands.