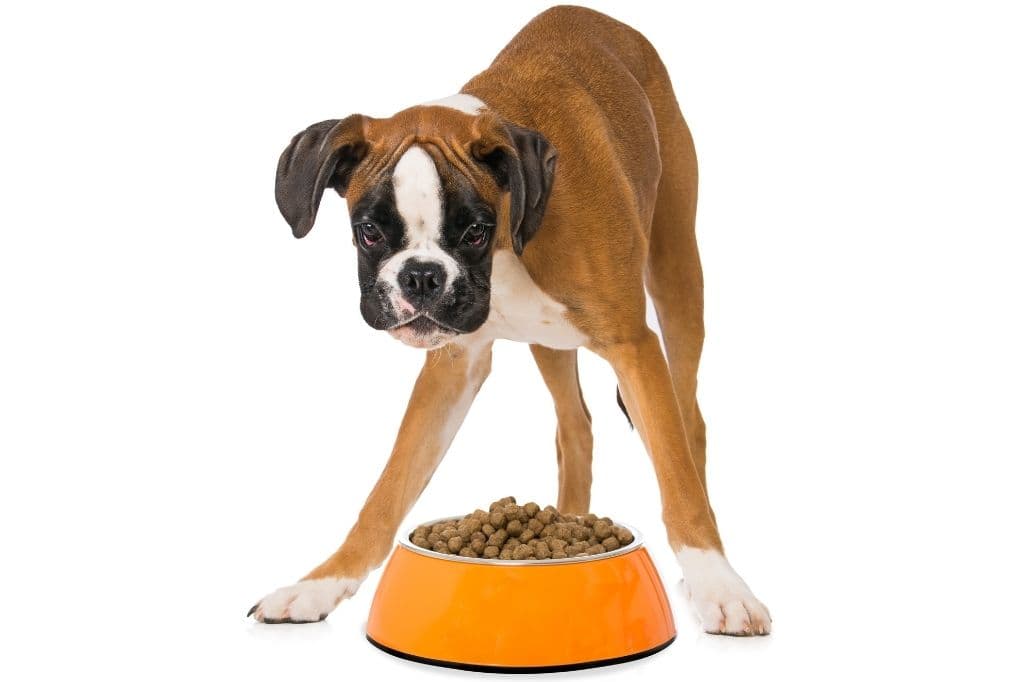 It goes without saying that Boxers should not eat processed foods like sweets, fast food or other junk food designed for human consumption.

But there are a host of other inappropriate foods that threaten to do more than upset your Boxer’s stomach and which can result in a veterinary emergency or sow the seeds of disease if fed repeatedly over time.

Topping the list of unhealthy or dangerous foods that every Boxer owner should avoid are:

I am not a vet. This post is intended for general informational and educational purposes only. I encourage readers to view my full disclaimer.

The risks posed by cooked bones are essentially two-fold:

Far too many owners have stories of dogs dying due to some combination of the above.

What makes these deaths so much more heartbreaking is that cooked bones are devoid of nutrition, making them pointless to feed: all risk with no value as food.

What To Feed Instead Of Cooked Bones:

Raw bones are wonderful, essential food for dogs — and the basis of a fresh, natural canine diet.

When selecting raw meaty bones for your Boxer, choose bones that are:

A Boxer dog’s diet should contain two types of bone:

Here is more information on why and how to feed raw meaty bones to your Boxer dog.

Chocolate is a treat for humans, but for our Boxers it can be downright dangerous.

No Boxer dog should ever eat any kind of chocolate, but if it happens by accident, the following information may help you know what symptoms to expect and to assess whether an emergency vet visit is necessary.

There are two things to consider:

If your Boxer ate a square or two of milk or white chocolate, he’s likely to be fine.

It’s potentially more serious if your dog has consumed a large quantity of dark chocolate, cocoa powder or cooking chocolate.

What makes chocolate dangerous for dogs are stimulants known as methylxanthines.

Chocolate contains two of them: theobromine and caffeine.

Theobromine is the most toxic of the two.

It comes from the beans of the cacao tree, which are used to make chocolate and cocoa.

Theobromine is metabolised much more slowly by dogs than humans, causing it to hang around in your Boxer’s body for up to three times as long.

In a dog, theobromine’s half life is 17.5 hours, meaning that’s how long it takes for the substance to reduce to half its original level.

Because different types of chocolate contain different amounts of theobromine and caffeine, the most important factor is what kind of chocolate your Boxer has eaten.

According to one veterinary toxicity calculator provided by Mosman Veterinary Practice and Hospital, if my 31kg Boxer ate less than 24 ounces (690 grams) of milk chocolate, he would be unlikely to have any reaction — and if he did, it would be minimal.

However, as little as 2 ounces (60g) of cocoa powder could cause a moderate to severe reaction including:

According to Mosman Vet, the least toxic chocolate for dogs is white chocolate and then milk chocolate.

Dark chocolate is worse, with dry cocoa powder and unsweetened baker’s chocolate (cooking chocolate) the most toxic of all.

This is a guide only.

Reactions will vary between dogs based on:

Take special care if your dog is already on steroids like prednisone because corticosteroids (and the antibiotic erythromycin) are contraindicated in the treatment of chocolate poisoning.

Note: sweets like ice cream may not cause a toxic reaction on a par with chocolate, but confectionery of any kind is inappropriate for your Boxer.

Here are 5 Reasons Why You Should Not Give A Boxer Ice Cream.

What To Feed Instead Of Chocolate

Most owners don’t feed their dogs chocolate on purpose — it’s usually an accident.

However, if you’re looking for a sweet treat to feed your Boxer, go for fruit instead.

Fruit is a natural secondary food for dogs, and something they eat in the wild when prey is unavailable.

When feeding fruit, remember to feed it:

Grapes are one of the few fruits you should never offer your Boxer.

Some dogs eat grapes without any adverse effects.

The fact remains, though, that grapes have been associated with kidney failure and death.

The exact mechanism by which they cause problems is unknown.

Seeded and seedless varieties have both been implicated.

One theory is that pesticides could be responsible — grapes are the sixth most pesticide-contaminated fruit according to United States Department of Agriculture data.

However, some grapes that have caused acute renal failure in dogs have tested negative for pesticides, heavy metals and mycotoxins.

Note that raisins, currants and sultanas are all made from dried grapes and therefore should also be regarded as toxic to your Boxer.

Learn more about grapes and your Boxer dog.

What To Feed Instead Of Grapes

There is no need to risk feeding grapes when you have so many other kinds of fruit to choose from.

Fruits suitable for your Boxer include:

4. Kibble And Other Processed Dog Food

This may come as a surprise inclusion in the list of things Boxer dogs cannot eat.

Though very effectively marketed to dog owners as “complete and balanced” and recommended by vets, kibble and other highly processed dog food is far from an optimal diet for a Boxer.

The health problems plaguing the kibble-fed dog population make more sense once you understand what is in kibble, and how it’s made.

Dry dog food you pour out of packet is convenient and relatively cheap — although less so when you consider the health problems that can result from feeding it day in, day out.

Unfortunately, the downsides of kibble are significant, and include:

To learn more about how these aspects of kibble can cause problems for your Boxer, checked out Should Boxers Eat Kibble?

What To Feed Your Boxer Instead Of Kibble

Here is how to feed a fresh, raw diet — the right way — to revitalize your Boxer’s health.

Fatty meals are blamed for outbreaks of pancreatitis in dogs, but most of the problems fat causes for dogs are much more insidious.

No Biological Precedent For High Fat

As a result, there is no biological precedent for the high levels of fat consumption that define the diet of the average modern pet dog, fed largely on factory farmed beef and chicken.

The products of human agriculture like cattle, sheep and chicken are deliberately fattened for slaughter.

Compare, for instance the fat on a wild rabbit to the fat on a farmed chicken — even a free range, organic chook.

There is no comparison.

As a result of eating lean diets throughout a million years of evolution, dogs’ bodies don’t require high fat consumption.

Too much fat saps a dog’s energy, because fat requires the most energy of all macronutrients to digest and creates an excess of nutrition, leading to an excess of waste that must be processed.

So, whatever toxins the chicken that your dog eats has been exposed to — antibiotics, hormones, pesticides and herbicides in grain — will leave residues in the chook’s fat.

The more fat your Boxer eats, the more toxins he’ll get along with it.

It’s the same process responsible for toxins acquired by fish from polluted oceans passing up the marine food chain, leading to the recommendation that people constrain their tuna consumption because this large, long-lived fish at the top of the food chain contains heavy metals like mercury.

Signs Of Fat Overconsumption In Boxers

Your Boxer may be consuming too much fat if he:

What To Feed Your Boxer Instead Of Fatty Foods

You can reduce the harmful impact of diets too high in fat by:

Not a food but water is something your Boxer drinks every day.

The US Environmental Protection Agency regulated more than 90 known contaminants in tap water.

..and scores of other contaminants that are legally allowed in small amounts but known to cause cancer and many other health problems affecting just about every organ in the body.

Even fluoride, deliberately added to water supplies, is associated with osteosarcoma, the leading cause of bone tumors in dogs and one of the cancers Boxers are considered prone to.

What To Give Your Boxer Instead Of Tap Water

You can filter your home water supplies by installing a reputable filtration system.

Alternatively you can give reputably sourced spring water, but beware water stored in plastic due to leaching.

Read this article for more detailed information on tap water and your Boxer’s health.

One of the many advantages of feeding a properly composed fresh, raw diet is that your Boxer will drink much less water because his food contains so much natural hydration.

Most owners know grapes, chocolate and cooked bones can be toxic to their dogs.

Fewer are aware that kibble, fatty foods and even tap water are unhealthy choices for Boxer dogs.

Safe chews and healthy treats, for instance, are just as important as eating a fresh, natural raw diet and drinking water that’s free of contaminants.