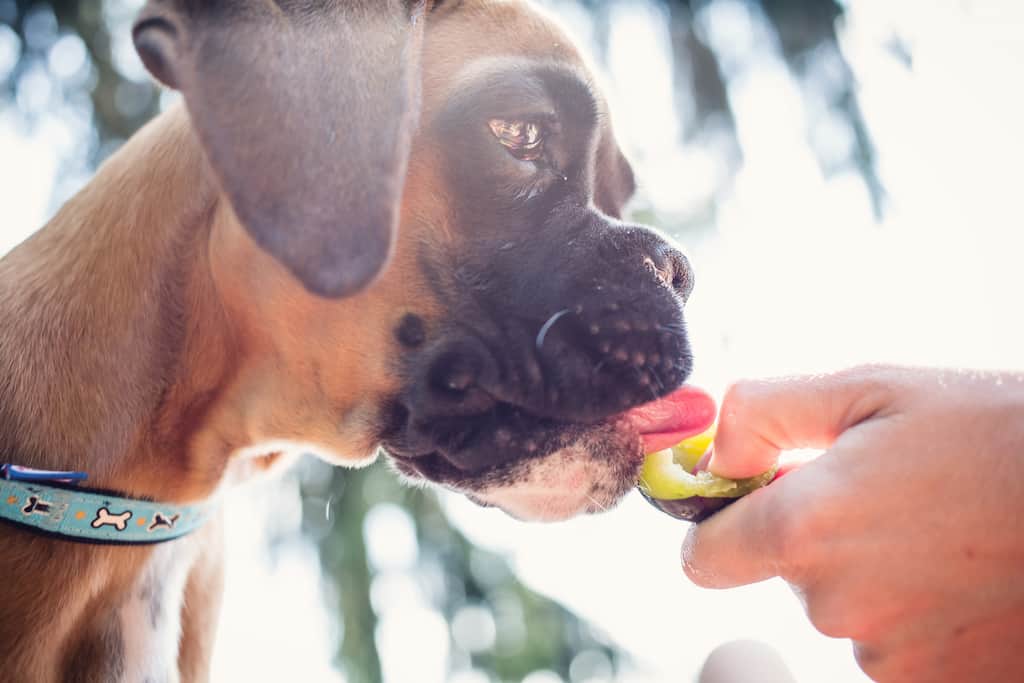 Boxer dogs can eat just about any fruit, with the exception of grapes.

Fruit is a natural secondary food for dogs, and Boxers will enjoy a range of fruit including banana, apple, blueberries and mango.

To promote the most efficient digestion of plant matter, it’s important to feed fruit to your Boxer the right way: separately to meat, not combined.

Fruit That Is OK For Boxer Dogs To Eat

Fruits Boxers can eat include:

Most dogs don’t like the citrus fruits as much, but if your Boxer enjoys oranges, go right ahead.

Note: it’s good practice with any new food to introduce it in a very small amount first, before gradually increasing quantities.

Fruit Boxers Should Not Eat

Though some dogs eat them with no problems, it’s safest to avoid giving grapes to your Boxer, due to their apparent association with cases of kidney failure and death.

Why Would You Feed Fruit To A Boxer Dog?

This means they require meat as their primary food, but can sustain themselves on fruit when prey is unavailable.

In fact, researchers with the Voyageurs Wolf Project, found the diet of gray wolves in northeastern Minnesota consists of as much as 83% berries (mostly blueberries and raspberries) for a whole month at the height of summer.

The wolves regurgitate berries for their pups too.

This dietary flexibility sets dogs apart from cats, which are “obligate” carnivores, meaning they can only eat meat.

So, dogs can eat fruit as a minor component of their food intake.

But why should they if we can just give them their primary food all the time?

There are quite a few benefits to including fruit in your Boxers diet, such as:

This is an oft-repeated myth about fruit, from the mouths of those with an obvious lack of experience feeding it properly.

Like any species, yeast can only overgrow when it has an overabundance of food.

What does yeast eat?

We don’t have to be microbiologists to realize it’s whatever’s on the skin.

Now, yeast is always on the skin, but in healthy dogs it causes no odor, discoloration or itch because the population is kept in balance (by a limited food source).

When there is an excess of secretions, or metabolic waste, on the surface of the skin, this material feeds an explosion in the yeast population.

When the body to amasses so much waste and toxicity that the primary eliminative organs of kidneys and bowels (i.e pee and poop) are overwhelmed, it resorts to using the skin as an emergency-release valve to expell the excess.

It is not fruit eating that causes this.

If fruit was responsible for yeast, all the non fruit-eating pet dogs (which is most pet dogs) would not suffer from such an epidemic of yeasty paws, ears and itchy bellies.

Rather, the culprit is fat overconsumption and the ingestion of other toxins in things like chemical dewormers, flea and tick treatments etc that define the lot of almost every modern pet dog.

Suffice to say: fruit will support your Boxer’s body to cleanse and detoxify, making him less prone to yeast, not more.

But only if you feed the fruit properly i.e. not combined with meat.

How To Feed Fruit To Your Boxer

There are a few principles to follow when incorporating fruit into your Boxer’s diet.

As fruit ripens its composition changes, the complex carbohydrates becoming simple sugars that are readily digested by dogs.

Though domestic dogs have developed some genes for amylase, the digestive enzyme that breaks down starch (carbohydrate), simple sugars are much more bioavailable.

This aligns with what happens in nature: aside from low-to-the-ground bushes, dogs could only ordinarily access fruit once it’s ripened to the point that it falls from the tree.

Dogs in natural settings never eat fruit at the same time as meat.

They always eat it separately.

This avoids the digestive conflict that occurs when fruit and meat are in the gut at the same time.

Fruit digests super fast, consisting as it does of simple carbohydrates or sugars.It requires almost no work on the part of the body to receive nutrition.

Meat, on the other hand, with its fat, protein and bone, requires an energy-intensive process that takes quite a while.

When you feed fruit to your Boxer, you will notice it can be in and out within as little as six hours.

Meat has a transit time of 12-24 and even 48 hours, depending on the state of your dog’s digestion.

The stomach is designed to digest food that is room temperature (or body temperature in the case of meat) — not refrigerated or frozen.

When in doubt, always ask, “How does this happen in nature?” and use that as your guide for what’s likely to be optimal — or at least, to know what your dog’s body is evolutionarily adapted to deal with.

Feed Melons On Their Own

When feeding watermelon, or other melons, be sure to feed it on its own as a “monomeal” i.e. only watermelon — not only separate to meat, but separate to other fruits.

This is because melons pass through the digestive tract lightning fast, much faster than all other fruits.

Feed Apples With The Skin On

The inclination might be to remove the skin from apples, but again: think how nature does it.

Do you see dogs out there with peelers, or spitting out the skin?

The skin of apples contains much of the fruit’s beneficial nutrients.

Quercetin is sometimes referred to as “Nature’s Benadryl” because it’s a natural antihistamine with the power to soothe inflammation.

The average apple can contain as much as 9mg of quercetin.

Eating an apple is infinitely preferable to having your dog ingest actual Benadryl or quercetin as an isolated compound in a synthetic supplement.

In its naturally occurring form, quercetin is complexed with other vitamins and minerals that make it more likely to be absorbed and used by the body.

It makes sense, doesn’t it?

But they do eat apples if given the chance.

Remove The Skin And Seeds Of Most Fruit

Your Boxer probably won’t eat these parts of the fruit anyway, if his instincts are intact.

However, it’s best to offer fruit in its safest form to a pet dog.

You don’t, for instance, want your Boxer eating the fibrous skin of mangoes or bananas or swallowing a heap of watermelon rind.

(Note that if your Boxer accidentally eats a small strip of banana or mango skin, it will likely cause no problem. You just don’t want to feed the skin on purpose.)

Mango seeds can be a choking hazard so it’s best to simply remove them and feed only the flesh.

Omit (For Now) Any Fruit That Comes Through Undigested

If you ever feed your Boxer something and you recognize significant amounts of it in the poop, looking the same way it did when it went in, your dog is not digesting it well.

This may happen if you’ve fed fruit that was not ripe enough.

If the fruit was ripe to overripe, and it still came through undigested, omit this fruit from the diet for the time being and try it again in a month or so, to see if digestion has improved.

An alternative would be to put the fruit through a juicer to crush it up.

If you do this, remember to feed the pulp that the machine extracts, as well as the juice.

Your Boxer dog can theoretically eat dried fruit, but there is a caveat: as long as chemicals have not been used in the drying process.

The trouble is chemicals are often used to make many dried fruits, and preservatives added — but it’s not always made explicit on the label.

So, it can be hard to tell what’s really in store-bought dried fruit.

Unless you’ve dried or dehydrated the fruit yourself at home, it’s best to avoid dried fruit for your Boxer.

In any case, fresh fruit, with all its hydration, is much more beneficial.

Pre-cut, packaged fruit from the freezer section of the grocery store might be an acceptable backup if you simply cannot get your hands on fresh fruit.

However, make sure preservatives have not been added (they often are, so check the label).

Frozen fruit should be thawed and brought to room temperature for feeding.

Always provide fresh fruit in preference to something that’s been frozen, even if it means your dog gets a little less variety because of the limitations of what’s in season.

Fruit is a healthful addition to your Boxer’s diet, as long as its fed ripe to overripe and given separately to meat.

By feeding fruit, you are replicating the natural eating habits of dogs.

As “facultative” carnivores, they require meat as their main food but are evolutionarily adapted to survive on fruit as an alternative for periods of time.

You will likely find your Boxer enjoys fruit as an occasional break from constant meat consumption — watermelon, mango and figs tend to be favorites.