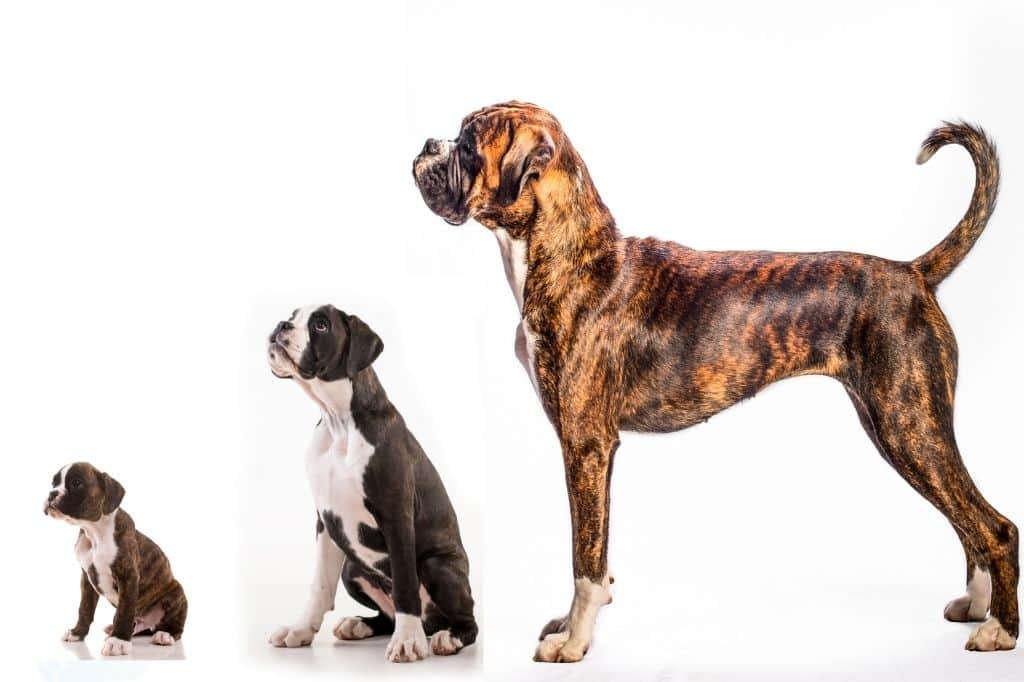 During the first year of his life, your pup will shoot up before your eyes.

As he outgrows beds and crates and collars before they’re barely broken in, you may wonder if it’ll ever stop.

Though a Boxer will have reached almost full height by around 12 to 18 months, the body and musculature will continue to fill out for a few years yet.

At What Age Are Boxers Fully Grown?

Boxers are a slow maturing breed, not considered adult until the age of two — or even three.

From the point of view of bone growth and development, growth plates will not have closed until at least two.

Growth is thought to last longer in males.

As well as the physical aspect, a Boxer undergoes a tremendous amount of mental and psychological development during these early months and years.

For a well-adjusted adult, now is the time to put in the work.

Temperament-wise and behaviorally, females can tend to settle down earlier.

However, many owners will tell you Boxers remain playful puppies for life, regardless of gender.

How Big Do Boxers Get?

A fully grown male Boxer of American bloodlines will be 23 to 25 inches at the shoulder.

Female Boxers are slightly shorter and may be a touch finer boned, measuring 21.5 to 23.5 inches tall.

European Boxers tend to be slightly shorter but more muscled and heavier.

See our article on the differences between the Boxer breed types.

The final size of your Boxer has little to do with whether he was the pick of the litter or the runt.

Rather, how big and strong your Boxer becomes will be influenced by:

Genetics And A Boxer’s Size

A Boxer’s bloodline will influence his ultimate size and build.

This is a result of divergent interpretations of the Boxer breed standard in different parts of the world.

In his native Germany, the Boxer has been bred as a genuine working dog.

This has led to a focus on physical strength and temperament, the attributes that equip a Boxer to excel as a guard and police dog, for instance.

In the United States, the emphasis has been more on conformation, or physical appearance as judged in the show ring.

Consequently, European Boxers tend to be more solid dogs with deeper chests and a more slanted line to the back.

The head is larger with a shorter, stouter muzzle.

“Euros” weigh more at maturity, with a greater muscle mass.

Temperament-wise these dogs are said to be calmer, more focused and therefore more easily trained.

American Boxers are have smaller chests but more substantial hindquarters.

They are just as smart, but tend to be more easily distracted.

Effect Of Neutering/Spaying On A Boxer Dog’s Size

Many owners assume that neutering or spaying curtails the final size of a Boxer, resulting in a smaller dog.

In fact, the opposite is the case.

It’s not just because neutering predisposes a dog to weight gain.

Neutering a young Boxer interferes with the closure of the growth plates in their skeleton.

Without the influence of important hormones produced by the sex organs, the growth plates don’t close when they normally would.

As a result of this delayed growth plate closure, neutered and spayed dogs undergo an extended period of growth.

They end up unnaturally tall, with distorted anatomical proportions.

Unfortunately, the majority of Boxer owners remain unaware of the health effects of removing a dog’s hormone-producing sex organs.

Without this knowledge, they have no way of assessing the advice of conventionally-trained vets who commonly recommend neutering all pet dogs.

Regardless of breed, these vets are often willing — and even pressure owners — to desex puppies exceptionally young, as early as six months.

The persistence of this practice flies in the face of evidence indicating it is overwhelmingly healthier for a dog to retain all their body parts.

The detrimental effect on a dog’s health is more pronounced the younger they lose their testes or ovaries.

A paper published in Frontiers in Veterinary Science in July 2020 recommended that, if a Boxer must be neutered or spayed, it should never be done before 2 years at the earliest.

What you feed your Boxer will play a major role in his growth and development, and the kind of health he enjoys lifelong.

Boxers do best when fed a natural canine diet.

Avoiding kibble will spare your Boxer the frequent gastrointestinal upset experienced by many Boxers fed this highly-processed commercially-made dog food.

In other words, give your Boxer a raw meaty bone-based diet.

Puppies ought be weaned directly onto raw, but if yours hasn’t been, you can start right away.

As outlined by raw feeding pioneer, Rottweiler and Great Dane breeder and vet Dr Ian Billinghurst in his book Give Your Dog A Bone, chicken necks and wings make a great starting point for puppies.

Bones contain calcium and phosphorus in perfect balance for a growing puppy.

(You can grind bones at first if you like.

But, as Dr Billinghurst explains, five and six week old pups can handle chicken necks and wings whole after about 10 days on solid food.)

Providing nutrients in whole food form avoids the excesses and deficiencies than can result from feeding artificially formulated dog foods, and from adding supplements like calcium powder.

Don’t fall for the gimmick of “puppy formulas” or “Boxer specific” kibble — this is marketing, designed to sell a product.

In nature, there is no puppy food distinct from adult food.

Once weaned, pups eat what the pack eats — regurgitated at first, but soon whole.

See also: What To Feed A Boxer Puppy

How To Exercise A Young Boxer During The Growth Phase

It’s important to provide a growing Boxer with the right amount of appropriate physical activity.

The chance to run about is important in the development of proper musculature.

However, a Boxer puppy shouldn’t be taken on long walks until 18 months to 2 years.

This is to avoid the stress to growing bones and joints from repetitive, jarring motion.

Your Boxer likely won’t say no, but too much exercise — or exercise of the wrong kind — can lead to joint problems later in life.

Until your Boxer is full grown, engage instead in play sessions.

This way, your Boxer can set the pace, rest when he chooses.

The movements will be much more natural, and gentle on his joints.

Boxers are powerful jumpers, but it’s best to avoid jumping until after growth is complete.

For this reason most dog agility clubs don’t accept Boxers until they’ve reached at least 18 months to two years.

Instead, throw balls and frisbees in such a way that your Boxer jumps long and low to the ground.

Make sure running takes place on soft surfaces like grass and sand, not concrete.

Signs Your Boxer Is Maturing

In a female, the most obvious milestone on the way to maturity is her first heat cycle.

This sexual maturity typically arrives between six months and one year old … but can happen as early as 12 weeks or as late as 15 months.

For males, the transition to adulthood is more behavioral.

You may notice your male Boxer begins to scent mark by lifting his leg to urinate, rather than squatting.

He may begin to show signs of territoriality, and may jostle for dominance with other dogs if he’s not clear on his place in the family “pack”.

Note, in multi-dog households, strong leadership on the part of the owner is critical, regardless of a Boxer’s gender.

Otherwise, there is potential for aggression and fights.

All dogs must understand the human is the “alpha” and their roles are to be a good follower dogs.

A Boxer that knows his place will relax and live harmoniously with other dogs.

While it might seem your puppy is growing like a weed, you want your Boxer to develop as slowly as possible.

Overly fast growth is thought to play a role in causing a deformity known as knuckling in Boxer puppies.

A natural, raw meaty bone-based diet protects against this.

When you first bring your Boxer puppy home at eight to ten weeks old, he will still have a little puppy fat.

This is as roly poly as a Boxer should be throughout his life.

Owners frequently worry when their puppy appears to get thin as he grows up.

This is the Boxer dog skinny phase, and totally normal.

Your Boxer will fill out beyond the age of three.

Even then, Boxers are meant to be lean, muscular dogs with a defined tuck at the waist.

If your adult Boxer is a barrel from front to back, he’s overweight.

Keeping your Boxer slim is about more than appearances as obesity in dogs is associated with multiple health problems.

How Much Should A Boxer Weigh?

A healthy Boxer is best judged not by what the scales say but by examining the dog’s physique.

The official Boxer standard makes no reference to weights.

Viewed from above, your Boxer should have a discernible narrowing at the waist.

From the side, the last couple of ribs will often be visible in a healthy-weight Boxer.

Keep in mind that most pet dogs in the United States are overweight or obese.

Because of this, most of us are conditioned to thinking fat dogs are normal and healthy-weight dogs are too thin.

A Boxer will generally be adult height by the time they are about 12 to 18 months old, but aren’t considered fully mature until as late as three.

Boxers typically experience a skinny phase on the way to adulthood, a period that can last many months.

Often a Boxer won’t bulk up until well into adulthood, and should always be lean and fit looking.

Give Your Dog A Bone, Dr Ian Billinghurst, 1993