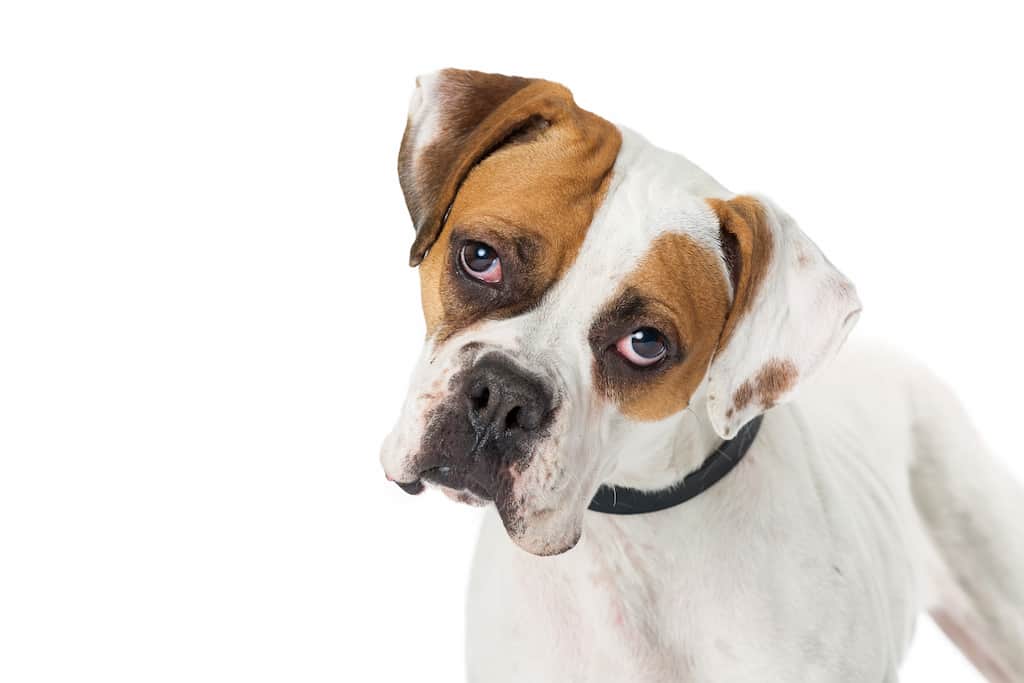 Typically a white Boxer is pure white at birth, aside from any patches.

It is normal for a Boxer to develop spots as it grows.

The markings are caused by the pigment melanin, which makes freckles and birthmarks in humans.

In Boxers, the color can be on just the skin, or on the coat as well.

This is similar to the way in which Dalmatians, the ultimate in white spotty dogs, are born with solid white coats and only develop their distinctive markings in the first weeks of life.

Spots are most common on a Boxer’s belly, chest and muzzle, but they can also have spots:

Some owners even report finding spots on their dogs’ tongues.

Flashy fawn Boxers (flashy means a Boxer with white markings) will also often have spots on the skin beneath their white markings, and on their bellies.

Heart Shaped Markings On A Boxer?

Speckling, or Boxer dog freckles, can seem to appear almost overnight on a white Boxer.

Some owners report being caught so off-guard they tried to wipe off the marks at first, thinking they were smudges of dirt.

Leopard. Spots. We all know the saying. But any Boxer owner can vouch for the fact that a dog most certainly can change.

Spots and splotches are so common on white Boxers that there is a fun belief often bandied about in Boxer owner circles that all Boxers have a heart-shaped marking somewhere on their body.

Sun And Spots On A White Boxer

Spots on a dog’s skin can darken with sun exposure, in much the same way that UV rays affect human skin.

Mostly this is a normal part of ageing, and harmless.

However white Boxer dogs can be more prone to sunburn, just like fair-skinned people.

Parts of the body where hair is sparse can be particularly sensitive.

This usually means the nose, the belly and the nether regions of intact males.

When Should You Neuter (Or Spay) A Boxer?

It’s a good idea to manage your dog’s exposure to hot midday sun.

If your white Boxer has very pink skin and sparse fur on the body and you must be out in the sun, a t-shirt offers some protection from sunburn.

We love the Gold Paw Sun Shield Dog Tee which is lightweight, divinely soft and even has the seams on the outside for added comfort.

The American Boxer Club recommends keeping some white pups out of the sun entirely and says white Boxers can suffer from a condition similar to “Collie nose”.

Monitor your dog’s skin so you know what’s normal.

Pay particular attention to any change in skin texture.

Incidentally, another problem commonly affecting white Boxers is tear staining which is generally a reflection of poor diet like kibble, tap water consumption or some other toxic input.

How To Fix Tear Stains In Your White Boxer
The 90+ Contaminants In Tap Water
Should Boxers Eat Kibble?

Spots Are Proof Your White Boxer Is Not Albino

White Boxers turn heads because they are less common than fawn and brindle Boxers.

But they are not albino.

White Boxers, on the other hand, have plenty of pigment.

Spots on their skin and fur are just the most obvious splotches of color.

Many white Boxers will have brindle or fawn patches over their eyes, ears, trunk or base of the tail.

Albinos, of any breed, will have pink eyes.

The other thing about albinism is that it’s very rare.

White Boxers — though special, we think —  are not actually all that unusual.

According to The American Boxer Club, about a quarter of all Boxers born to parents with white markings will be white.

This is just one of several facebook communities for white Boxer owners.

According to the breed standard, a Boxer is defined as white if less than a third of the body is colored.

If your Boxer has so many spots that they cover half of the body, the dog is technically considered “check” or “piebald”.

What Should An Ideal Boxer Look Like?
How To Tell If A Boxer Is Purebred

If you notice a new spot on your dog that looks different to the other markings, take a closer look.

Generally, as long as spots are flat and not raised above the surrounding tissue, and are not causing your dog any discomfort, they are fine.

However, there are a range of conditions that can cause pigment changes in a dog’s skin.

These disorders include but are not limited to:

What Is Seasonal Flank Alopecia In Boxers?

Among its many, and often serious, side effects, the drug prednisone can cause light skin to darken and also the reverse phenomenon: a lightening of dark skin.

(When my own white Boxer was on prolonged, high-dose steroids his black spots began to flake off.

He also developed the skin condition known as calcinosis circumscripta, characterised by hard lumps that ooze a chalky white substance.)

What Prednisone Does To Your Dog’s Body
Strange Skin Lesions? It Could Be Calcinosis

Many owners of white Boxers will have fielded the half-joking, half-serious questions from passers-by, intrigued by their dog’s unique appearance.

“Is that a Boxer or a Dalmatian?”

Whatever you like to call them, spots are just another quirk adding to the appeal of the white Boxer.